Recommendations, opinions, and reviews of books and sites.
Post Reply
5 posts • Page 1 of 1

Anyone has this book? It would be great to hear your comments.

Sorry to bump a 2 yr old thread, but I've been on a bit of a notation book collecting spree lately and was looking into this book on Amazon. The content may be great, and the chapter headings may have been an editorial decision beyond the author's control, but ... a book on visual perception that puts chapter headings in swash caps?!?! 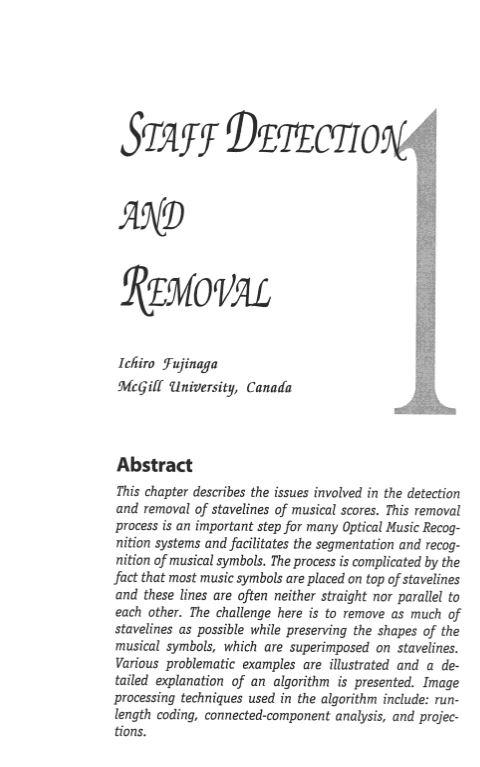 The books can be interesting to read for the music engraving professionals, particularly for - in my opinion - finding a good balance in BW output on page, density and object boldness (staff lines, small staffs, etc.). The book is based on the optical recognition of music sheets, and interesting is how computers are programmed to "look" at these scores and how to recognise music quickly - something that human musicians do it naturally.

Description of Each Chapter

In Chapter 1, Dr. Ichiro Fujinaga describes the issues involved in the detection and removal of stafflines of musical scores. This removal process is an important step for many optical music recognition systems and facilitates the segmentation and recognition of musical symbols. The process is complicated by the fact that most music symbols are placed on top of stafflines and these lines are often neither straight nor parallel to each other. The challenge here is to remove as much of the stafflines as possible while preserving the shapes of the musical symbols, which are superimposed on stafflines. Various problematic examples are illustrated and a detailed explanation of an algorithm is presented. Image processing techniques used in the algorithm include: runlength coding, connected-component analysis, and projections.

In Chapter 2, Professor Pierfrancesco Bellini, Mr. Ivan Bruno and Professor Paolo Nesi compare OMR with OCR and discuss the O3MR system. An overview of the main issues and a survey of the main related works are discussed. The O3MR system (Object Oriented Optical Music Recognition) system is also described. The used approach in such system is based on the adoption of projections for the extraction of basic symbols that constitute graphic elements of the music notation. Algorithms and a set of examples are also included to better focus concepts and adopted solutions.

In Chapter 3, Dr. Susan E. George investigates a problem that arises in OMR when notes and other music notation symbols are super-imposed upon stavelines in the music image. A general purpose knowledge-free method of image filtering using two-dimensional wavelets is investigated to separate the super-imposed objects. The filtering provides a unified theory of staveline removal/symbol segmentation, and practically is a useful pre-processing method for OMR.

In Chapter 4, Dr. Kia Ng examines a method of recognising printed music — both handwritten and typeset. The chapter presents a brief background of the field, discusses the main obstacles, and presents the processes involved for printed music scores processing; using a divide-and-conquer approach to subsegment compound musical symbols (e.g., chords) and inter-connected groups (e.g., beamed quavers) into lower-level graphical primitives such as lines and ellipses before recognition and reconstruction. This is followed by discussions on the developments of a handwritten manuscripts prototype with a segmentation approach to separate handwritten musical primitives. Issues and
approaches for recognition, reconstruction and revalidation using basic music syntax and high-level domain knowledge, and data representation are also presented.

In Chapter 5, Dr. Susan E. George concentrates upon the recognition of handwritten music entered in a dynamic editing context with use of pen-based input. The chapter makes a survey of the current scope of on-line (or dynamic) handwritten input of music notation, presenting the outstanding problems in recognition. A solution using the multi-layer perception artificial neural network is presented, explaining experiments in music symbol recognition from a study involving notation writing from some 25 people using a pressuresensitive digitiser for input. Results suggest that a voting system among networks trained to recognize individual symbols produces the best recognition rate.

In Chapter 6, Professor Pierfrancesco Bellini, Mr. Ivan Bruno and Professor Paolo Nesi present an object-oriented language capable of modelling music notation and lyrics. This new model makes it possible to “plug” on the symbolic score different lyrics depending on the language. This is done by keeping separate the music notation model and the lyrics model. An object-oriented model of music notation and lyrics are presented with many examples. These models have been implemented in the music editor produced within the WEDELMUSIC IST project. A specific language has been developed to associate the lyrics with the score. The most important music notation formats are reviewed focusing on their representation of multilingual lyrics.

In Chapter 8, Dr. Dave Billinge and Professor Tom Addis investigate language to describe the emotional and perceptual content of music in linguistic terms. They aim for a new paradigm in human-computer interaction that they call tropic mediation and describe the origins of the research in a wish to provide a concert planner with an expert system. Some consideration is given to how music might have arisen within human culture and in particular why it presents unique problems of verbal description. An initial investigation into a discrete, stable lexicon of musical effect is summarised and the authors explain how and why they reached their current work on a computable model of word connotation rather than reference. It is concluded that machines, in order to communicate with people, will need to work with a model of emotional implication to approach the “human” sense of words.

In Chapter 10, Dr. Susan E. George considers the problem of evaluating the recognition music notation in both the on-line and off-line (traditional OMR) contexts. The chapter presents a summary of reviews that have been performed for commercial OMR systems and addresses some of the issues in evaluation that must be taken into account to enable adequate comparison of recognition performance. A representation language (HEART) is suggested, such that the semantics of music is captured (including the dynamics of handwritten music) and hence a target representation provided for recognition processes. Initial consideration of the range of test data that is needed (MusicBase I and II) is also made.
Freelance Composer. Self-Publisher.
Finale 25.5 • Sibelius 2019 • MuseScore 2+3 • Logic Pro X • Ableton Live 9+10 • Digital Performer 9 /// OS X El Capitan, (side system: Debian 9, Windows 10)
Top

OCTO wrote: ↑
28 Sep 2017, 17:49
The books can be interesting to read for the music engraving professionals, particularly for - in my opinion - finding a good balance in BW output on page, density and object boldness (staff lines, small staffs, etc.).

I think that I would find that aspect of it interesting, thanks. I have a few books that have addressed this a bit regarding legibility in related subjects, most usefully Edward R. Tufte's "Envisioning Information," and Robert Bringhurst's "Elements of Typographic Style," but I don't think I've read much directly related to music other than brief mentions of page density in a few engraving books.
Top
Post Reply
5 posts • Page 1 of 1

Return to “Books and Sites”