John Ruggero wrote: ↑
09 Feb 2017, 13:41
Fred, I have looked through many standard piano and orchestral scores from the best publishers from Brahms to Ligeti, and I can't find an 8va anywhere. They are all 8----. Could this be a Pop vs Classical thing?

I dunno. I just went to Boosey's perusal site, clicked on the three most popular scores and found instances of 15ma and 8va in just a few seconds. Steve Reich's Music For 18 Musicians has a 15ma on pg 32, John Adams's City Noir has an 8va on pg 28, Copland's Third Symphony has an 8va on pg 18. I stopped looking after that.
http://www.boosey.com/cr/perusals/

Perhaps it's a piano vs other instruments thing, as pianists are more accustomed to reading them.
Top

Schonbergian, I didn't mean to target anyone and certainly not you, but I must admit that our interaction on the other thread jogged me into finally posting on a subject that I had been thinking about for a while and needed to get off my chest. Of the clutter, those little periods are certainly not the worst offenders.

Knut, you seem to understand the situation quite well even from my wordy description, but here is an example from a Chopin Waltz(?). It only exists as a single sketch that was first published in the 1950's. There are no performance instructions in the sketch, so any editor is faced with adding some slurs at the very least.

1a This would be my preferred slurring, since the piece seems more a waltz than a mazurka (although there are mazurka-like touches) and the grace notes would probably be of the connective type.

1b This would be the same with the traditional extra slur. It tempts the unwary player who thinks of slurs as indicating phrasing rather than as legato into making a break before the grace notes.

1c This would counteract 1b, but I have never seen it done. For me, it seems to be clutter.

2a Were one to perform the piece more in mazurka-style, this would be my preferred slurring. This is the slurring in the Henle edition.

2b This is the same with the traditional extra slur. In this case it reinforces the break and seems more acceptable.

Regarding stemming in the example:

This is what Henle does with ms. 1-2, destroying the unity of the three note motive by including the upbeat in the slur and changing the stem direction and implying that the third beat of measure 1 is an upbeat into measure 2 by breaking the slur. That this cannot be correct may be seen by the absence of an upbeat to measure 5 of the sketch and the same stemming as measure 1.

John Ruggero wrote: ↑
09 Feb 2017, 19:07
Schonbergian, I didn't mean to target anyone and certainly not you, but I must admit that our interaction on the other thread jogged me into finally posting on a subject that I had been thinking about for a while and needed to get off my chest. Of the clutter, those little periods are certainly not the worst offenders.

My comment was intended to be light-hearted, rather than expressing annoyance, so I apologize if it came across that way.

Re:grace note slurs - I agree with Knut that they work better on aesthetic rather than merely practical grounds.
Top

I was pretty sure that it was light-hearted and apologize if it sounded as if I thought you were annoyed.

John Ruggero wrote: ↑
09 Feb 2017, 20:45
I was pretty sure that it was light-hearted and apologize if it sounded as if I thought you were annoyed.

Just goes to show that text - unlike music - is an imperfect medium!
Top

Fred, maybe it's an American phenomenon? I remember using the 8va with Arnstein.

I just spent some time looking through many pieces that are at the core of the modern repertoire. 8 - - - - seems to have been the standard since at least the end of the 19th century. However, since Finale makes 8va the default for the Octave Tool, this may have been forgotten, which is really a step backward,

Here are the scores I sampled. All of them use 8 ----. Some famous pieces are not listed because I could find no octave signs in these scores.

OCTO wrote: ↑
09 Feb 2017, 02:11
Here is one of these clutters that actually is perfectly clear to perform.
viewtopic.php?f=3&t=22
Not sure why, but sometimes dense pages make more sense than loose. Maybe I cannot call it clutter!

What do the curves after second A and D indicate? 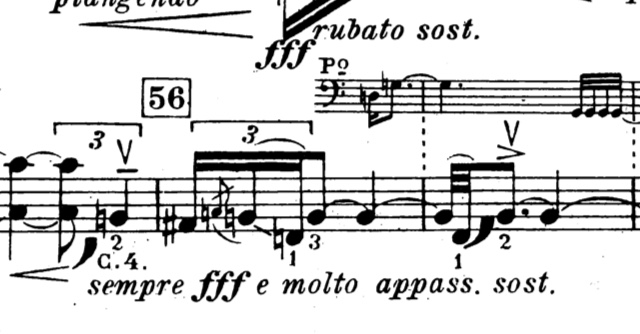 This unusual marking is discussed at the end of the thread: