This following post was in a response to Vaughan's explanation of the Finale's Beam options in another thread. It might serve as a start to a discussion of beaming.

Thanks, Vaughan. I did a little experimenting with a piece I am working on and now know why I have never made use of those beam settings. None of them does job for me; patterns that should be angled are flat and vice versa. So I have it set at what I guess is the default: Flatten Beams Based on the Standard Note, which doesn't produce too much bad stuff, and I adjust the beams as necessary.

For me, beam angles have to do with the musical sense, i.e. the beam for the same set of notes might be angled differently depending on context. That makes it complicated and intuitive process. Since I am essentially hand copying with a computer when it comes to beam angles, I should really refrain from further comment on the subject; but probably won't!

The second example bases the beam slant on the end notes. Now all the other beams are unmusically following static broken chord patterns as if they were melodies. The visual impression is of activity, while the piano part simply moving along in a placid way.

So I prefer the third example which combines aspects of both:

Interesting. When I first saw that post I tried not to read the text but first to look at the pictures. I guessed some comparison is to be made.
I liked the most the last version.
There is small difference between m.9 in the examples 2 and 3. Concerning this, I was wondering if it is possible to make even more pleasant combination of:
- beam slope (including white spaces)
- beam distance (including white spaces)
- beam thickness

Here is my "improvisation", not necessarily needed to be 'correct':

FWIW, Gould is pretty clear about the second beaming group in the third bar. Because the group of 3 repeated notes is closer to the beam than the first note, she says it should be horizontal. 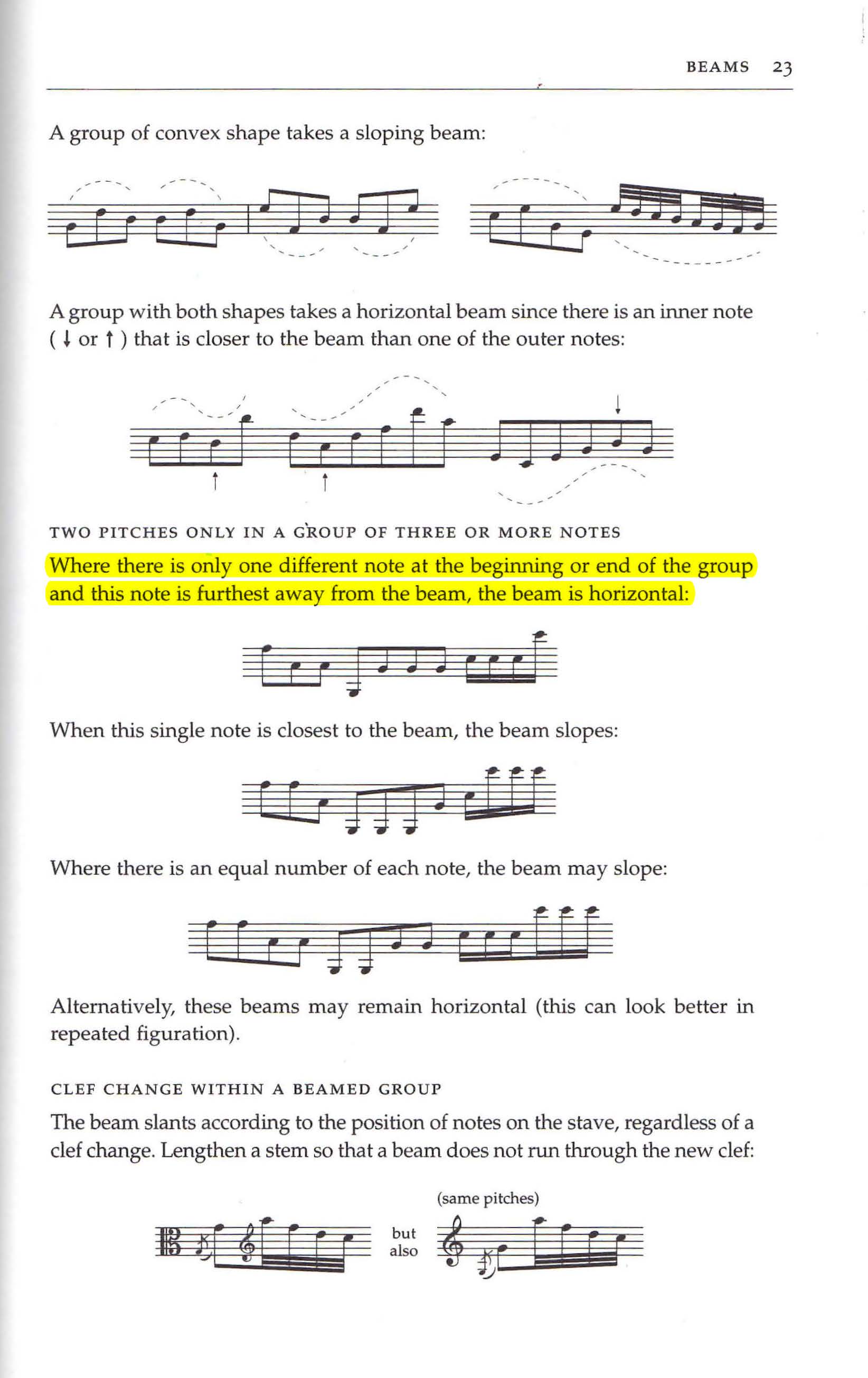 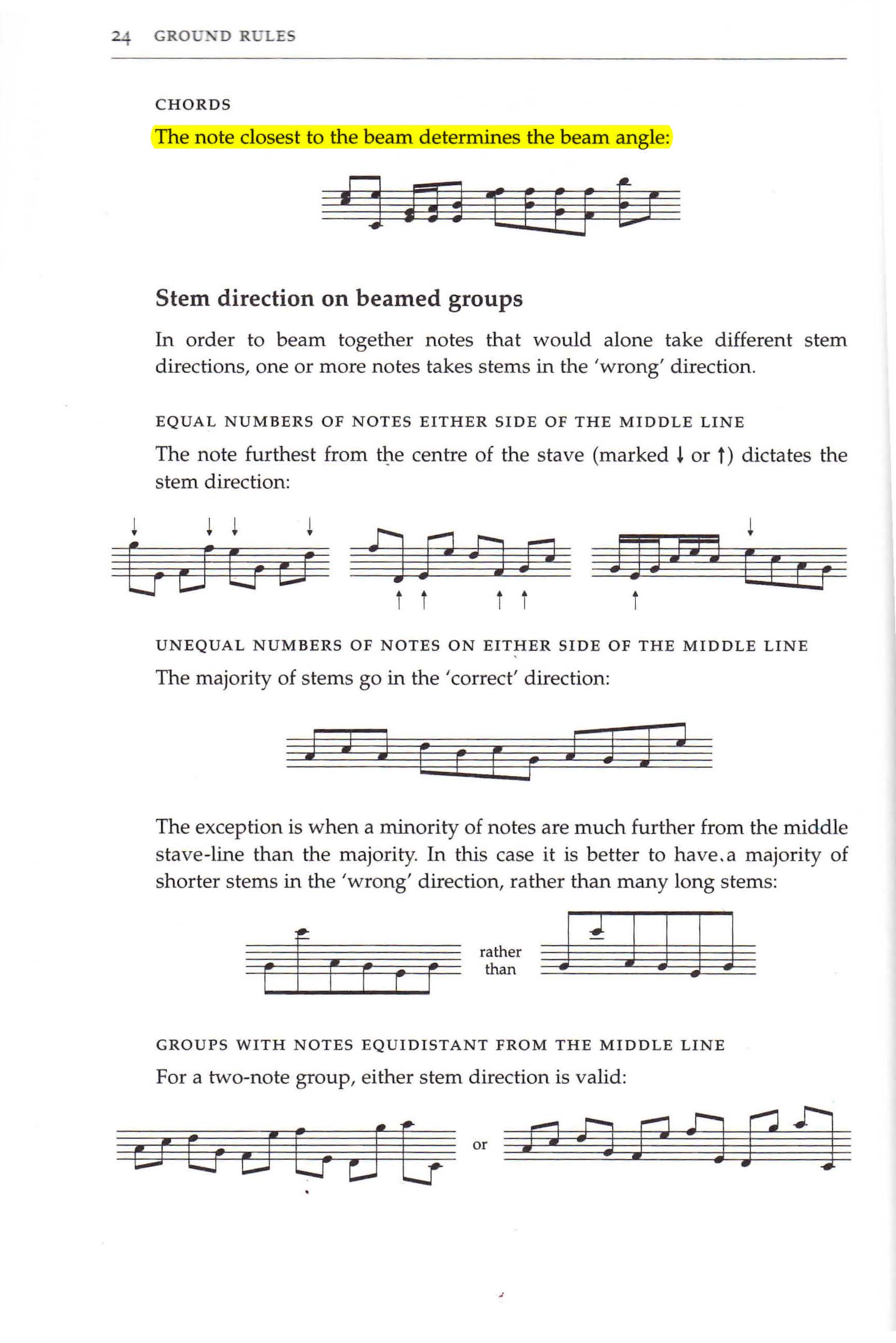 As I said, in the previous thread, I prefer to angle beams according to musical logic, not rules of Gould's type.

It is interesting that Gould entitles her example: "chords". I hear only one chord in this measure of the Schubert: an A minor triad, but I do see two melodies. The alto melody of the piano moves with the clarinet. The upper melody is holding from before and has less significance momentarily. I would therefore give precedence to the alto in terms of beam angle. If the two melodies were stemmed individually, the alto melody would have an angled beam. The fact that, for convenience, the two melodies are single-stemmed changes nothing musically and so should not, in my opinion, change the visual impression. I do not care for a horizontal beam over an ascending or descending melody.

Incidentally, if the same half measure in the piano were repeated several times, I would use a horizontal beam for each group, because the meaning of the melody would now be different: a static oscillation around the central tone, A.

OCTO, I like your version. The slight undulation in the beaming pattern in measure 12 is musical, since the pianist might bring out a little more melodic activity in this measure. We are now at the point where engraving and musical interpretation meet.

Actually, all horizontal beams look a little "dead" and mechanical to me, and I wonder if the slightest deviation from horizontal might not be more beautiful than perfectly horizontal for many such beams. I mentioned this in passing in the post concerning the Bach Invention no. 8 pattern in the previous thread.

Beam thickness is not something that I have delved into yet, so I just use the Finale default. Your slightly thicker beams are very nice. Your slurs also seem a little thicker than mine, something that I should also consider.

Thanks! It was a quick trip but a fun gig. I've been taking my mirrorless Fuji around lately too and got some great candids from backstage/soundcheck including a good shot of Edgar Meyer.


John Ruggero wrote: Obviously, this kind of beaming is hard to set down in simple rules. So hard and fast rules are established that sometimes don't fit the music.

I would think the kind of beaming that occurs in the second measure would be fairly easy to have a set rule, yet I don't think I saw one for that exact situation in the books I checked. If the two intervals are the same (A-E-A-E) then it should be flat. If the third note was lower than the first (A-E-G#-E, for example) then it should be flat. I guess flat is safe in this case, but the 1/4 space slant in your second example looks pretty good to me too.
Top

My main point is that beam slant should be tied to what is happening in the music, and since the very same intervals and note combinations mean very different things at different times, no invariable beam slant can be specified by a rule for any combination of notes apart from an actual musical situation.

For me, the 1/4 space slant in the second measure of the second example seems too much because it implies that the final E in the four-note group is some kind of melodic goal, which is clearly not the case. Since the melody is completely static here, the beaming should be also.
Mac mini (OS 10.8.5) with dual monitors, Kurzweil Mark 5 with M-Audio Midisport 2 x 2,
Finale 2014d with GPO 4, JW Plug-ins, SmartScore X Pro, Adobe InDesign CS4,
Inkscape .48.5 and .91, FontForge 20150526
http://www.cantilenapress.com
Top

Fred, you are absolutely right that the rules should (must) be followed, at least to have consensus about it. Otherwise, in the engraving jobs there are plenty of people who don't have a slightest idea how notation works, and they would end up with terrible scores which they call "great"...

Mine example, as said, is a small improvisation, just to see what you think, as well it is with John's.


John Ruggero wrote:Beam thickness is not something that I have delved into yet, so I just use the Finale default. Your slightly thicker beams are very nice. Your slurs also seem a little thicker than mine, something that I should also consider.

John Ruggero wrote:For me, the 1/4 space slant in the second measure of the second example seems too much because it implies that the final E in the four-note group is some kind of melodic goal, which is clearly not the case. Since the melody is completely static here, the beaming should be also.

Good point, flat it is then. The 4th measure is interesting as well. Ross has many examples on pgs 94-97, 115-118, but not this one exactly. It seems like a fairly common situation, but none of Gould's examples have this situation either.

I actually just went to Faber's site to click on some perusal scores, just to see if I could find this situation in something she edited. I clicked on the very first score in the library (A Blackbird Sang, 2013) and it has fairly bad beaming IMO, so Faber isn't even following all of the Gould and Ross rules:
http://scorelibrary.fabermusic.com/A-Bl ... 27343.aspx

Check out measures 22, 33, 36, etc. It's just one example and the first thing I clicked on so I'll give them the benefit of the doubt, but m36 looks pretty awful to my eye:

That's not even the Sibelius default beaming (at least as of Sib 7.1, the latest I have) so I'm kind of at a loss as to why they did it that way.
Top

We've all had rush jobs that aren't our best work, but if it's published it's sort of fair game IMO. I don't mean to pick on Faber, but I always assumed Gould's 2011 book developed out of a Faber house style guide and they aren't even coming close to following the beaming rules. Here's an example from "A Hymn to St Etheldreda" from 2013 that is 0 for 2.