Peter West wrote:Patterson Beams in Finale does a really good job of adjusting the beam thickness (and thus reducing the space) on beams that are steeply angled. I don't like the example here for that reason also (and of course the awful slur, as John pointed out already)

The plug-in does not affect cross-staff notes, which is likely the reason why the beams in this example look a little too thin. Manual editing of beam thickness does not provide you with the same incremental control as the plug-in does. The way that the upcoming Sternberg application draws beams, highlighted in the article in MJCube's link, is indeed a step up from current applications. I'm really looking forward to this feature.


The example I posted has numerous problems, but that doesn't exclude the fact that the opaque beams are a unique and interesting solution to one of the problems engravers face, like it or not. Considering the method currently needed to obtain this effect in Finale, I highly doubt that a plug-in will be able to help with this.

To me, the only reason for not applying this effect, or at least offering it as an option in engraving work, is the amount of additional time spent on each and every beam. Dealing with angles is time consuming enough.
Top

Since we have revived this thread on beaming, maybe it is acceptable if I change the subject a little to secondary beam breaks? I was recently called to account for my failure to break through to the 1/8th note level in a group of eight 32nd notes (as advocated by E. Gould) in an example I posted at:

Actually I was just duplicating what is present in the New Liszt Edition:

But then I explained:

"...I do not always break through to the 1/8th beam level, as logical as Gould's reasoning seems, because it breaks up the music too much in certain circumstances. In my opinion, a group of eight 32nds should sometimes not be broken, sometimes broken to the 16th and sometimes broken to the 1/8th beam. That gives three visual variations to suit the music. (Incidentally, the New Liszt Edition breaks through to both 1/8th and 16th levels on the very first line of music. And a "Paderewski" edition also at IMSLP shows all three versions on the first line.) [I would add here that all of these editions are at variance with the original edition, which is also visible at IMSLP!]

However, I am referring to solo and chamber music. In orchestral parts, I think it best if Gould's rule be observed for ALL instances of eight 32nd notes." (This was Arnstein's rule, and I think it is a very good one.)

I think it depends on a composers objective.

For those who want to 'micromanage' the interpreter, I guess it could be used to convey semantic subtleties. Personally, though, I'm more of a proponent of notational consistency. Breaking beam groups at several different levels like this within the same piece just seems like it's bound to be confusing.
Top

Knut, I agree totally with you that consistency is extremely important if the player is not to be confused, but only within parallel instances.

Here are two complete pages from the first edition of Liszt's Hungarian Rhapsody no. 11. At times, both the beaming and stem direction are non-standard, even for his time. There must be over 60 "errors" in the second example alone! But there are good reasons why he did what he did, and he is very consistent. In fact consistency often contributes to the non-standard usage. 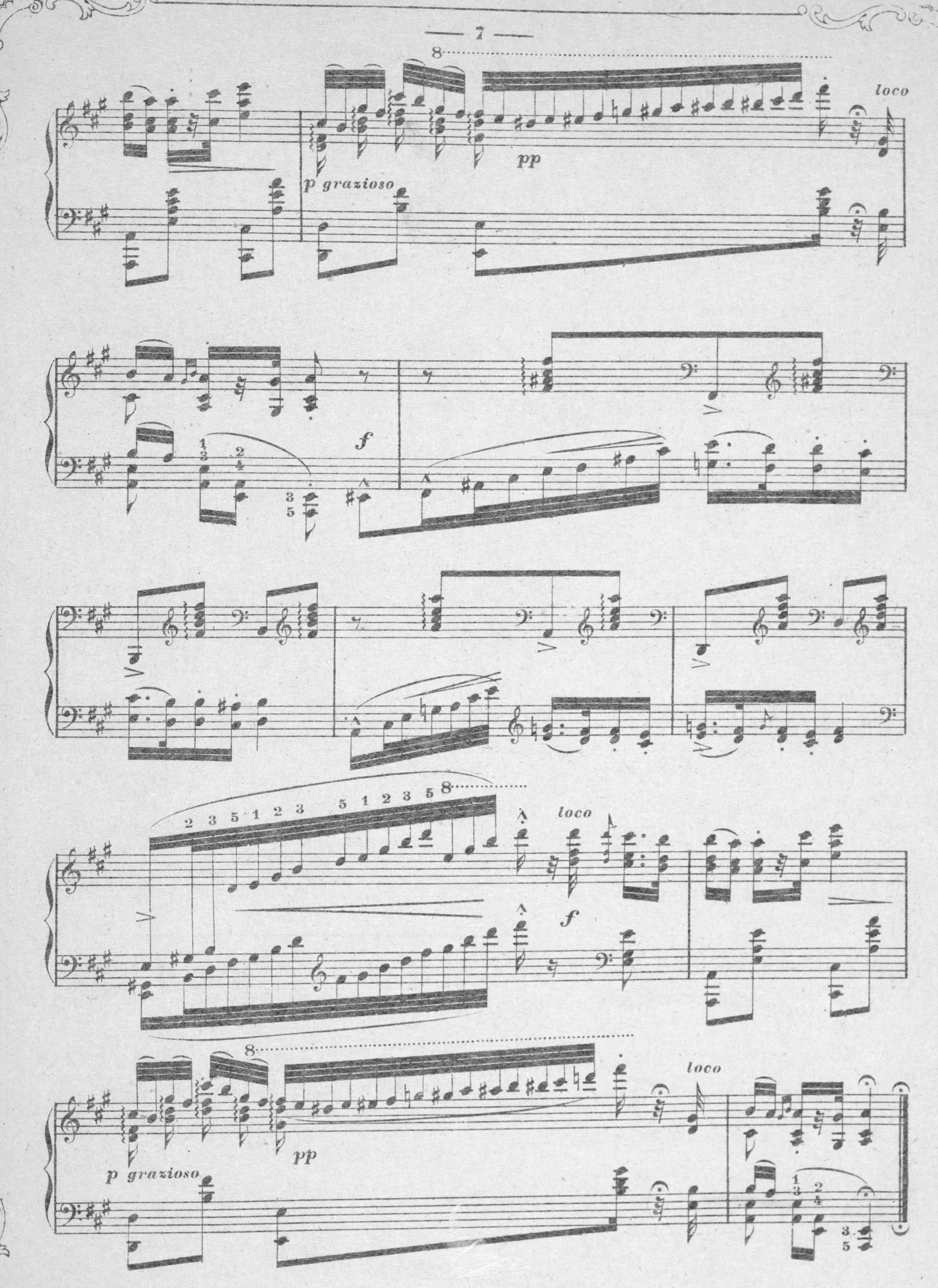 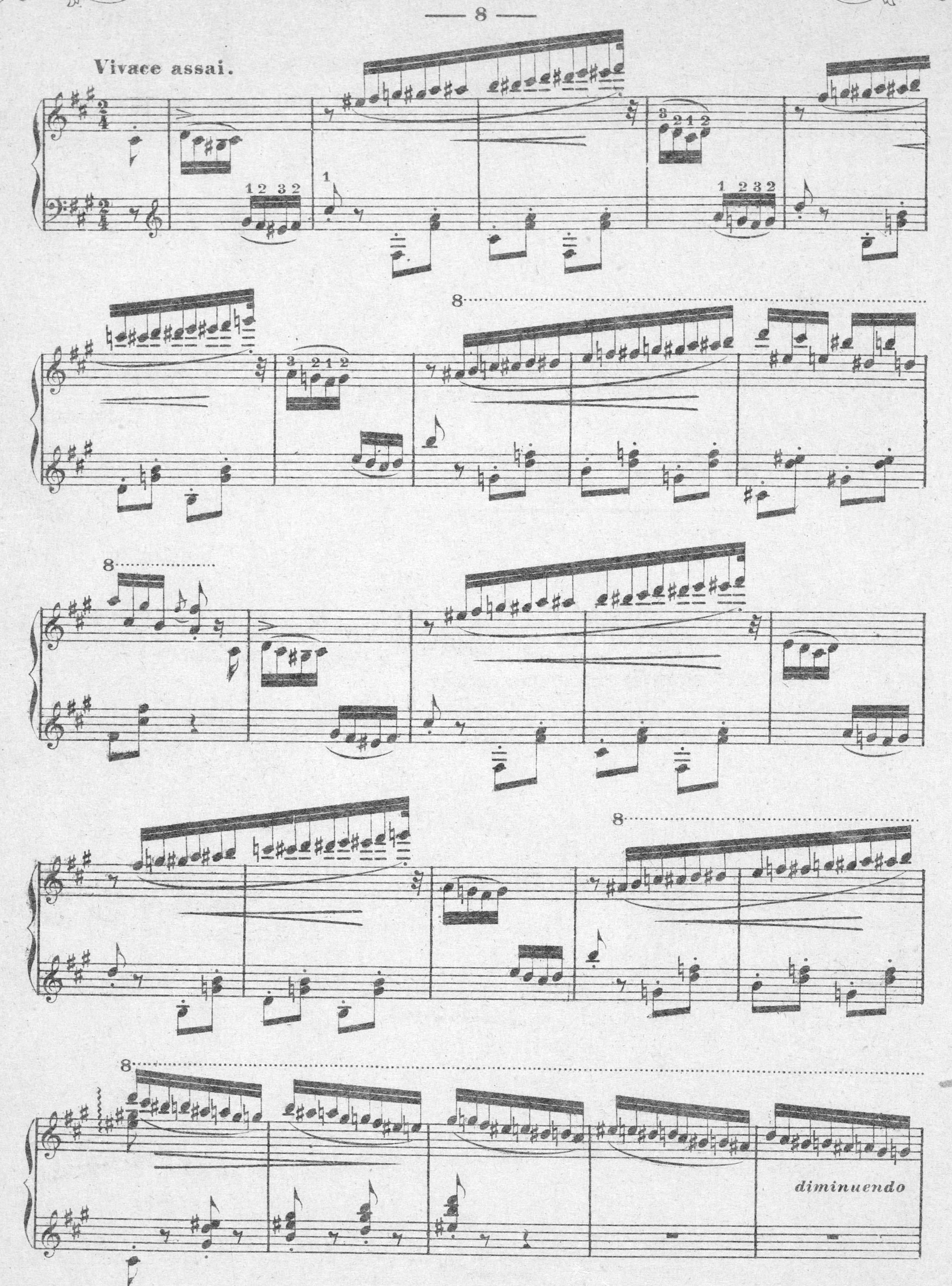 I can't see any secondary beam breaks in your example at all. Liszt seems to either break all the beams, or none at all in this piece, which makes much more sense than breaking secondary beams at different levels based on subtleties in articulation (or other interpretive aspects).
Top

I don't think secondary beams are broken for purposes of articulation, generally. I will accept that often all beams are broken for that purpose, but I think secondary beams are (should) only be broken for easing legibility, and therefore, while they should generally be used in orchestral material to make sight-reading or minimum rehearsal less hazardous, they are not so necessary in solo music and solo parts (e.g. concerti) where the player has more time to prepare and learn the content. This would certainly explain the choice not to break secondary beams in the Liszt edition examples above. The one exception to this, I think is when groups of 6 could be interpreted as 3x2 or 2x3, and broken beams are often the best way to clarify this.

As far as how many beams to break: this should match the rhythmic point of the break, so for example is there are 16 64th notes they would be broken as follows: 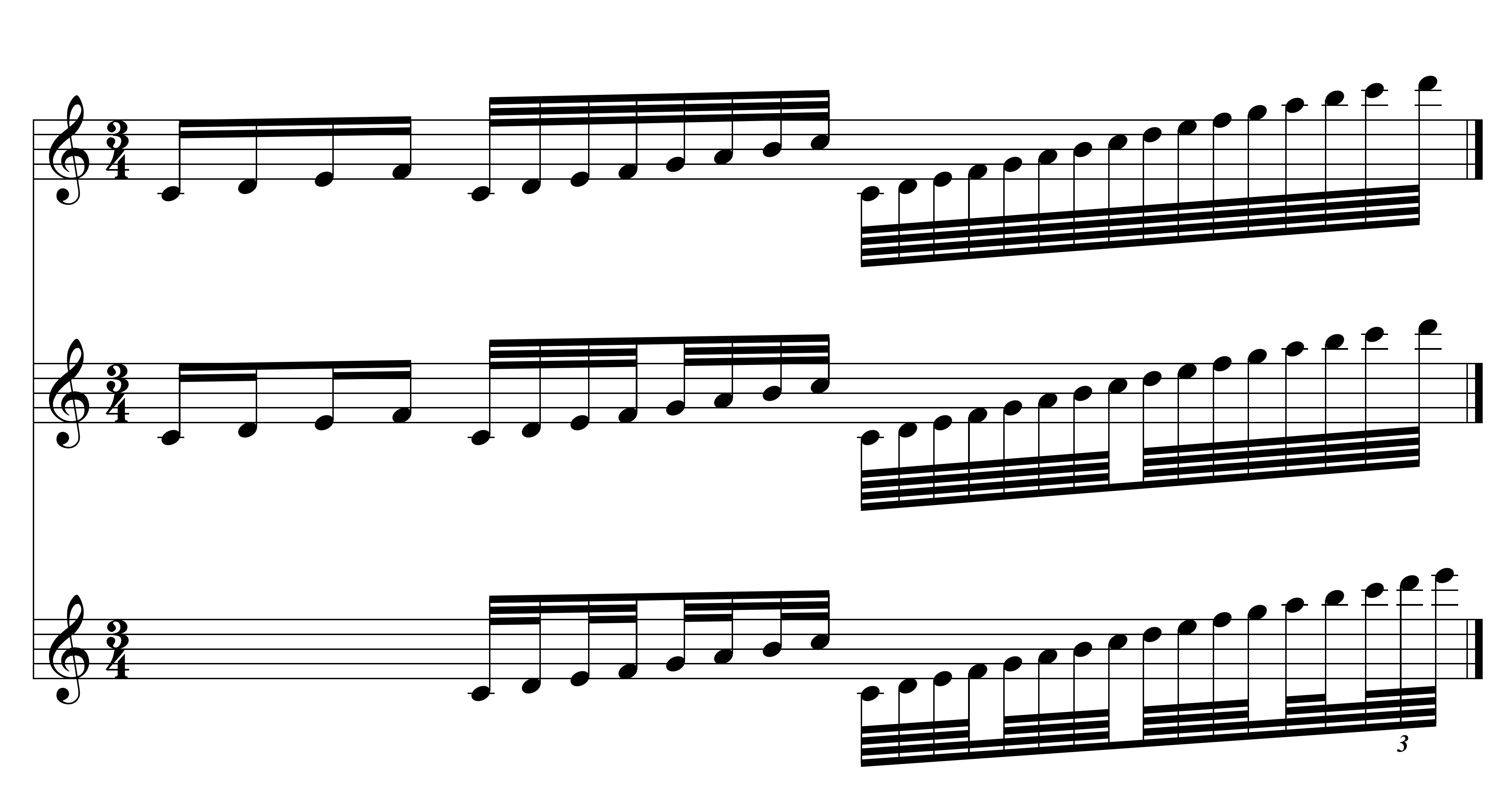 I think that it is quite clear that Liszt didn't break the beams in the previous examples because he didn't want emphasis on any internal note(s) of the runs. His was so concerned that he didn't even break many beams at the end of measures!

Apropos of the thread on stem direction, we see in the second Liszt example in my previous post that the "upper voice" is shown with upward stems throughout, the "lower bass chord accompaniment voice" with downward stems throughout, and the "middle voice" starts with very unusual downward stems to signal that it is indeed the middle part as distinct from the upper chromatic run and to show that the right hand should play UNDER the left hand continuation (shown with upward stems)! The ingenuity of this notation is, to me, incredible. And all of this designed to bring out the orchestral quality of the music.

As I said, I agree totally with E. Gould that for orchestral parts secondary beam breaks should follow the rules so clearly explained by Peter West above. However for solo music etc. all bets are off. Secondary beam breaks like everything else notationally can be used creatively.

Here is the first line of Liszt's Hungarian Rhapsody no. 13 in the first edition, which looks to me like an accurate transcription of the composers MS. In any case, someone thought that some of the 32nds should not have secondary beam breaks and some should. The engraving shown was continued accurately in the first Complete Lizst Edition. Notice also the concern about continuity of stem direction within the second measure.

In the following example, we see that a later editor (Peters) had qualms about the readability of the first set of 32nds, but broke through through only to 16th beam because of concerns about continuity and emphasis. However, the secondary beam breaks in the last measure are "normal" in conformity with the first edition. Note the changes in beaming, layout, stem direction etc. Most of the Peters changes made their way into way the New Liszt Complete Edition, which is, to me, not commendable in a critical edition.

I wrote a reply yesterday, but have been thinking a little more about it, so let me start again:

I'm in agreement with Peter on the purpose of secondary beam breaks; I don't really see how the number of such beams could affect the music in the way a broken primary beam would. I agree with you that the Peters edition seems very inconsistent in this respect, but I would prefer some changes in the first edition as well. I am not speaking to how this should be handled in an urtext edition of this work specifically, but what makes most sense to me in a modern context.

From an executional standpoint, I don't think it should matter whether you break any secondary beams or not, but as Peter pointed out, they are helpful in underlining the rhythm. The question then becomes, where does Liszt want a beat to be stressed and not? With this in mind, below are two options that I would consider, depending on the interpretation of the original beams and slurs (the latter making this less than obvious, in my opinion):

Knut, I don't think that the Peters editor was inconsistent. His reasoning is clear: to clarify the beats without breaking things up too much in areas where he discerned that Liszt didn't want any interior emphasis. He was trying to find a compromise between "normal" and Liszt's original.

As usual, I think that the original edition (composer's MS?) is best. Let me describe what I see in it:

2. The 32nd's grow out of the opening note in a improvisatory way with very free rhythm and without any sense of organization as shown by the lack of secondary beam breaks. It sounds confused as if in emotional turmoil.

3. This continues through into the next measure, but the eight 32nd note motive begins to be discerned at little, as shown by the slur.

4. This takes us to the second beat of measure 2 as an arrival point, which also represents a new beginning.

5. The new start begins with some effort as if already weary, because the motive must repeat to get started again. This defines the first four notes as independent and breaks the original larger motive into two discernible parts.

6. These parts are emphasized in m. 3 by the secondary beam breaks and the rit., but Liszt also wants to show the enlargement of the motive from eight to twelve 32nd notes, so he doesn't break the 1/8 beam throughout the measure as a way to hold it all together. The enlargement costs a lot of emotional energy as shown by the dim. and rit. There is also a sense of resignation in this measure preparing for what happens next.

7. On the next line of music, the opening four note motive starts a new main melody as the real arrival point. The opening three measures are now heard as this melody trying to be born out of a very emotional experience.

To me, every change to the original is bad because it negates what Liszt is showing in his notation. But the worst change is the breaking of the 1/8 beam in measure 3. This occurs in every edition except the first Liszt Complete Works, which keeps the original notation entirely intact throughout:

Rhapsody no. 13 was Lizst's favorite of the 19. It has always been my favorite, as well, because it is the deepest and most heartfelt of them. This is shown in the notation of these first three measures.
Mac mini (OS 10.8.5) with dual monitors, Kurzweil Mark 5 with M-Audio Midisport 2 x 2,
Finale 2014d with GPO 4, JW Plug-ins, SmartScore X Pro, Adobe InDesign CS4,
Inkscape .48.5 and .91, FontForge 20150526
http://www.cantilenapress.com
Top
Post Reply
62 posts