John Ruggero wrote: ↑
20 Oct 2017, 22:06
OCTO. perhaps implied in your post is that computer-composers have to notate everything literally for exact computer playback. Then they treat musicians iike computers. "Music" like this should stay on computers for other computers to listen to.

For a lot of jobs now, a fairly detailed audio mock-up has come to be expected. Here's the absurd metronome marking from recent pop orchestra job I worked on: 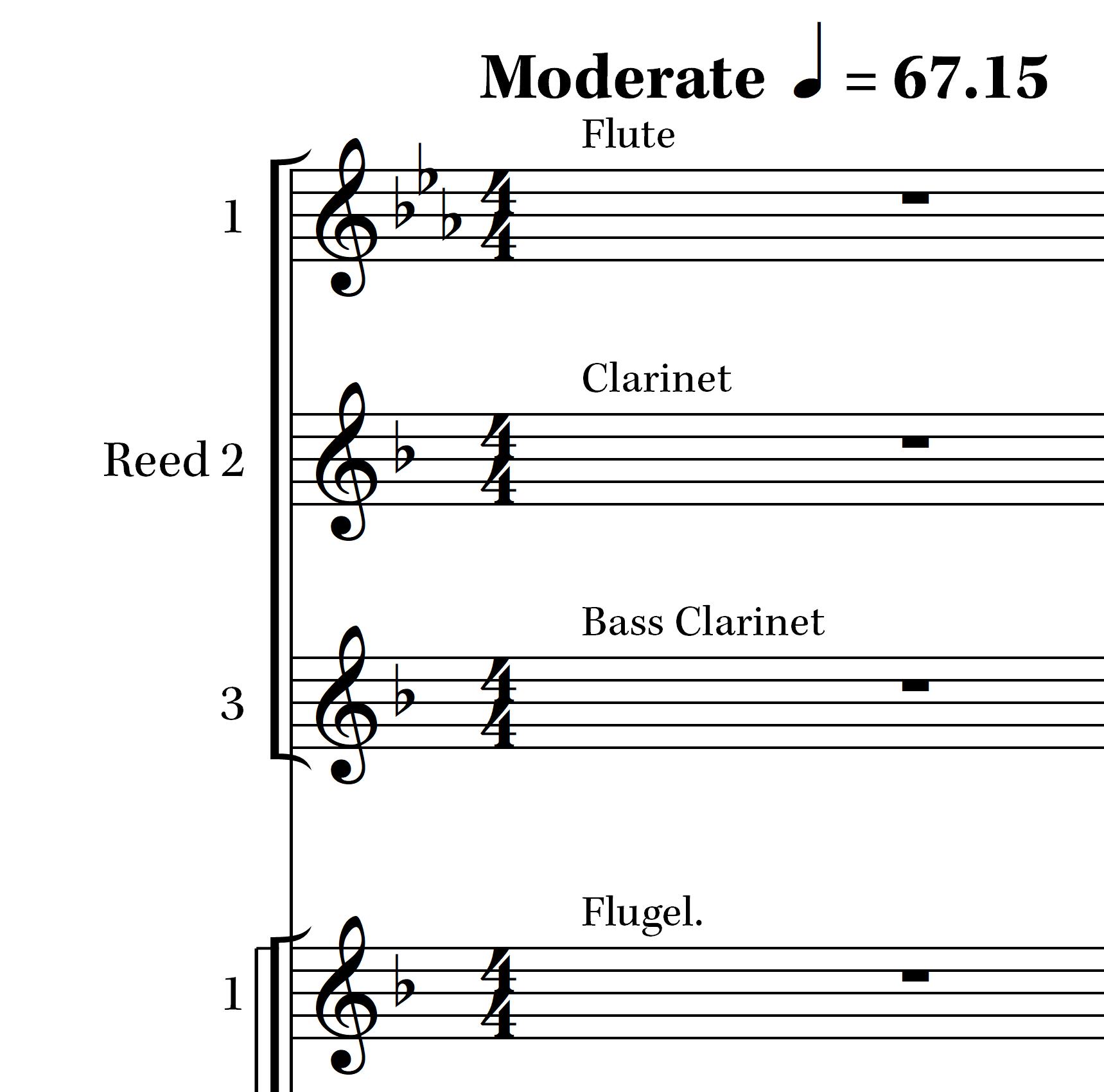 I asked the arranger (who is actually quite brilliant at this sort of work) if I could just put something standard there, but he was on such a short deadline as this whole project was a rush job, and the file still had to be worked on by the MIDI guy who was completing the mock-up, that he said just to leave it. I'm sure the studio musicians who were recording it must have thought it was ridiculous, but perhaps they are used to seeing stuff like that now.

The overnotating trend to make the computer playback as exact as possible is definitely not a good development IMO, and often results in a lot of superfluous notation that actual human musicians do not need, but unfortunately I think we are going to continue to see more and more of this as a fairly precise audio mock-up is now becoming standard and expected for new works.
Top

I hope I don't start getting routinely asked for these, although I do usually offer a low grade playback file to the non-musician part of any cross-art collaboration.

The artist who created the video for this http://sound-scotland.co.uk/event/rohan ... umar-piano due for premiere in two weeks, was given a (somewhat misleading and low grade) audio file exported from Finale. I have not offered to, nor been asked for, any such thing by the musicians. Indeed, after a rehearsal in London a few weeks ago, I asked the artist for 30 seconds more video in one section, as it was agreed that this part works better musically at a slightly slower tempo than my original marking. (There is some latitude throughout this combination of music and video, but it transpired that I had not allowed quite enough here.)
Finale 25.5 & F 26.2.2
Mac OS 10.13.6 & 10.14.6
http://www.composers-uk.com/davidward/news.htm
Top

David Ward wrote: ↑
21 Oct 2017, 09:56
That said, there are striking instances from the past of great pianist composers who have not necessarily written ideally for orchestra and are sometimes inconsiderate or even downright impractical in their demands on real live orchestral musicians. The piano, on which a few have perhaps over relied in the past, had the potential to be as misleading in relation to orchestral reality as is today's computer playback. A sensitive inner ear, if possible aided by practical experience, helps.

I agree completely with your premise, David, but have to uphold the honor of the great pianist-composers: the only one that i can think of who didn't write beautifully for the orchestra was Chopin, who wrote a few orchestral accompaniments in his short life all of which are perfectly adequate and played constantly. Some point fingers at Schumann; but I wouldn't. Then there is JS. Bach, Handel, Haydn, Mozart, Beethoven, Schubert, Mendelssohn, Liszt, Brahms. Grieg, Rachmaninoff, Debussy, Ravel, Stravinsky, all of them primarily keyboard players who wrote beautifully for the keyboard, the orchestra, and every medium they touched.
Last edited by John Ruggero on 21 Oct 2017, 19:22, edited 1 time in total.
Mac mini (OS 10.8.5) with dual monitors, Kurzweil Mark 5 with M-Audio Midisport 2 x 2,
Finale 2014d with GPO 4, JW Plug-ins, SmartScore X Pro, Adobe InDesign CS4,
Inkscape .48.5 and .91, FontForge 20150526
http://www.cantilenapress.com
Top

David Ward wrote: ↑
21 Oct 2017, 09:56
I find myself troubled by this in reverse when trying to concoct (and that is the best word) a piano reduction vocal score, but needs must…

OCTO wrote: ↑
20 Oct 2017, 18:31
And often that kind of ties are written by composers who never mastered any instrument, nor performed live on a concert.

I find myself being to harsh here.
Actually I did this kind of writing as well.
But next week I will play Mozart in orchestra... Something to learn from that guy!
Freelance Composer. Self-Publisher.
Finale 25.5 • Sibelius 2020 • MuseScore 2+3 • Logic Pro X+ • Ableton Live 10+ • Digital Performer 9+ /// MacOS Mojave, (side systems: Fedora 32, Windows 10)
Top

David Ward wrote: ↑
21 Oct 2017, 14:47
I hope I don't start getting routinely asked for these, although I do usually offer a low grade playback file to the non-musician part of any cross-art collaboration.

It seems pretty routine for me now. Most of the time I'm working in Finale and I have Garritan Personal Orchestra, Jazz & Big Band, & World Instruments. I'm happy to do a simple mock-up with those sounds as it's fairly quick and easy, but if they want anything more professional they've got to shell out for a dedicated MIDI guy. I have no interest in purchasing more expensive sound libraries.
Top

John Ruggero wrote: ↑
21 Oct 2017, 17:43
… … …all of them primarily keyboard players who wrote beautifully for the keyboard, the orchestra, and every medium they touched.

Of pianist composers, Brahms is seemingly more considerate than many others in his treatment of the trombones. In the usual (Simrock) edition of the score of his first symphony, the trombone entry for the last movement chorale at C is potentially hazardous for the first trombone after silence throughout the preceding three movements, except that Brahms allows the trombones a little touch of unobtrusive warm up at B. I'm pretty sure that what's at B really is there for that purpose. Other composers, including some on your list, are less considerate. My biggest gripe as a bass trombone player was always that composers would write low notes that were too long for the dynamic: one has to breathe, and loud low notes use a lot of air. Mind you, conductors often make matters worse.

R Strauss, perhaps not primarily a pianist, sometimes quite deliberately wrote things that he considered beyond the accurately possible. He was apparently quite put out when cellos and basses began to play the opening of his Don Juan cleanly and accurately, responding that it was meant to be a ‘scramble.’ Such a scramble from the cellos and basses still takes place in a notorious passage in Elektra about which players complain that it is impossible. I think the usual result is very likely what is intended. There seems to be a bit in the storm from Beethoven's Pastoral that is rather the same. In other words, perhaps the effect can justify the means, however awkward or disconcerting for members of the orchestra. But one does need to be careful not to take this too far. Computer playback, to return to the earlier comment, can obscure the reality.
Finale 25.5 & F 26.2.2
Mac OS 10.13.6 & 10.14.6
http://www.composers-uk.com/davidward/news.htm
Top

My one claim to fame is being personally told by Solti his anecdote about tempi in Rosenkavelier, when Strauss said to him "Just sing it as you would speak it".
Top

Thanks for the clarification, David. I thought you were talking about the negative effect being a keyboard player had on the quality of those guys' orchestration. Yet they all orchestrated marvelously in my opinion.

And I think there is world of difference between a composer who knows what he asks when he asks players to do difficult, yet possible and very necessary things, and a composer who doesn't.
Mac mini (OS 10.8.5) with dual monitors, Kurzweil Mark 5 with M-Audio Midisport 2 x 2,
Finale 2014d with GPO 4, JW Plug-ins, SmartScore X Pro, Adobe InDesign CS4,
Inkscape .48.5 and .91, FontForge 20150526
http://www.cantilenapress.com
Top

I agree on the overnotation problem in modern music. My university composition professor insists on exact metronome markings, explicit "con/senza pedale", not using hairpins without explicit dynamic markings on either end, and so on. She insists it's for "precision", but I just feel it's superfluous, particularly after seeing the brilliantly simple notation of composers like Chopin demonstrated here. The musician is not an idiot and can usually determine basic things for themselves (God forbid!)
Top
Post Reply
67 posts