Thanks for your suggestions, Florian. The two fonts superimpose over each other perfectly at 12 pts. Wess designed his font to be an exact metrical equivalent for the Times New Roman. I have always used 12 pt TNR and then Wess's font and it seems right to me, because I don't like the expressions to dominate the page. However, I have been considering making the dynamic symbols a little smaller, which might bring them more in line with the expressions. Maestro 24 pt is pretty big. While I prefer them to Bravura, the Bravura dynamics are smaller, and that is probably better.

Actually I can't imagine the bar numbers being any larger. Just glancing at the Wiener Urtext edition of the sonatas, I notice that the italicized bar numbers, which are positioned as I have them, are considerably smaller.
Mac mini (OS 10.8.5) with dual monitors, Kurzweil Mark 5 with M-Audio Midisport 2 x 2,
Finale 2014d with GPO 4, JW Plug-ins, SmartScore X Pro, Adobe InDesign CS4,
Inkscape .48.5 and .91, FontForge 20150526
http://www.cantilenapress.com
Top

Ah, ok.
The bar numbers look larger than the expressions to me.
Top

Sorry, I misread your comment about the bar numbers, Florian. You would prefer that the expressions and bar numbers match in font and size? Possibly the bar numbers smaller than shown and the expressions larger? I will definitely consider your suggestion.
Mac mini (OS 10.8.5) with dual monitors, Kurzweil Mark 5 with M-Audio Midisport 2 x 2,
Finale 2014d with GPO 4, JW Plug-ins, SmartScore X Pro, Adobe InDesign CS4,
Inkscape .48.5 and .91, FontForge 20150526
http://www.cantilenapress.com
Top

Well, it's not really about what I would prefer. I just assumed that expressions and bar numbers were both set in 12 pt and that made me think the fonts had wildly different vertical metrics.

But if you ask me, yes, I would make the bar numbers smaller (especially here, because they're hardly needed for a lonesome pianist's rehearsals) and the expressions slightly larger.
Top

Getting a fresh viewpoint is always helpful, Florian, and i considered your suggestions very seriously. However, I do like my current sizes for expressions and measure numbers and will stick with them. Reasons:

I don't want the expressions to stand out too much or create crowding issues (which can be considerable when engraving according to the original sources) and for that reason will probably reduce the size of the dynamic symbols a little.

The measure numbers are a little larger than the very similar ones in the Editio Budapest Complete Liszt edition, which influenced my original choice. I like that fact that they get out of the way of the music, being in the thin Times New Roman italics, yet are much easier read than the much smaller ones in Henle or Wiener Urtext.

Might I ask why, in the final bar, you slur on the note-side rather than the beam-side? Just to keep the continuity of appearance?
Top

You ask a very interesting question, Schonbergian, and something that has struck me forcefully in dealing with Beethoven's sonatas in the manuscripts and the first editions.

Thus far (I am up to op. 31 no. 2), Beethoven's places slurs on the note head side even when there are multiple voices on one staff if there is enough space that it doesn't cause a problem. In this particular case, continuity also played a strong part in his decision.

I add below the measures that follow the first example. Note that in measures 5-6 of the new example, Beethoven cannot follow his preference in slur placement because the hands are too close together, but he immediately resumes it in measure 7-10. (Edit: Note that he continues the stem direction from ms. 5-6 throughout ms. 7-10 to preserve continuity, while modern editions reverse the stem direction in the last half of ms. 7-10 in the right hand.)

This illustrates one of the big differences I see between Beethoven's notational style and our current one: he doesn't give up on a notation that he considers more expressive simply to adhere to a standard rule such as: place all expression marks on the stem side when there are multiple voices' on the same staff. Adhering to a standard rule makes everything simple and consistent from a surface point of view since it requires no decision-making, which was very appealing to engravers soon after Beethoven's time and unfortunately has replaced the earlier approach. 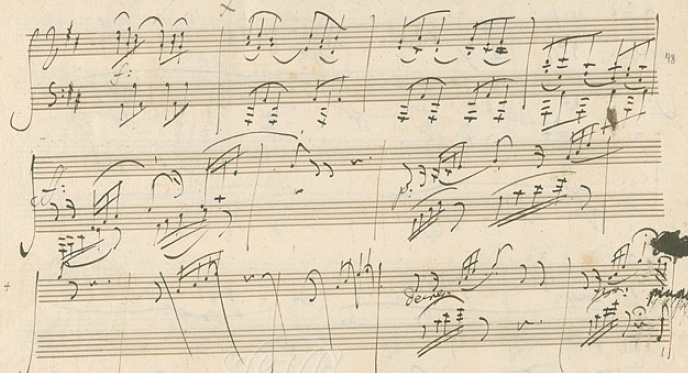 Here is an interesting illustration of "inner" slurring from the second movement of Beethoven's op. 31 no. 2:

In ms. 2 and 3 of the example, the right hand lower voice suddenly moves from being a harmonic filler to an important counter-line. The slurs point out the two short entrances of what sound like contrasting instruments in a way that would not be as clear if the slurs were on the stem side as it is normally engraved.

Similarly in the left hand in m. 4, the slur emphasizes the contrasting shape of these two melodies (quasi-inversion) and suggests an expressive interpretation of all three notes to bring out the relationship. If the first slur in m. 4 were on the beam side, one would be tempted to treat the C as a mere broken chord tone (as in the previous measure) and therefore hold the E through the C to connect to the F.
Mac mini (OS 10.8.5) with dual monitors, Kurzweil Mark 5 with M-Audio Midisport 2 x 2,
Finale 2014d with GPO 4, JW Plug-ins, SmartScore X Pro, Adobe InDesign CS4,
Inkscape .48.5 and .91, FontForge 20150526
http://www.cantilenapress.com
Top

Here is an extraordinary example of sensitive stem direction from the second movement of op. 31 no. 2 as it appears in Nägeli's first edition:

The lone up stem for the D in m. 2 of the example clarifies the movement of the melody E

. There was a danger that the D might be viewed as leading on the D

in the middle voice, with the G entering anew and continuing from the high E

in the first measure. (This danger is seen the following example.)

The notation was lost in Simrock's edition that followed the Nägeli, and in all later ones that I am aware of: