Beethoven’s manuscript copies of his published works are very accurate. He almost never writes wrong notes and every one of his small note heads is clear. He rarely omits necessary accidentals (which cannot be said for Chopin or Mozart.) He supplies dynamics, other marks of expression, and precautionary accidentals in a more thoughtful way than many composers. And when articulation markings go missing it’s usually because there is an unwritten and quite obvious “simile” being applied.

He also seems to have been quite concerned about legibility for the sake of the engraving accuracy and spreads the music out very spaciously on the page. This also allowed him more room to write in corrections without having to rewrite whole sections, time-consuming in the days of hand copying. Perhaps this desire to save time explains his habit of “progressive correction”. He expected the engravers to apply obvious corrections throughout. Unfortunately, they rarely did.

He shared a habit with Chopin in sometimes drawing his slurs so that they run over both ends of the group of note heads. This sometimes makes it difficult to tell whether a legato group was intended to terminate on or before the next downbeat and when slurs are intended to continue from line to line. At over times, he draws the slurs precisely. Perhaps he was impatient with the slur as a symbol and only took care when the slurring was crucial.

Beethoven’s staccato markings have provoked controversy—needlessly, in my opinion. They are clear dots when combined with slurs to indicate portato, but otherwise vary from lines of various lengths down to dots. As a result, some of the original editions opted for dots and some for wedges; all used dots for the portatos. Schenker’s edition uses wedges, the new Wiener Urtext uses a marking that looks like a small line. Most editions, however, have used dots throughout. In my opinion, this approach is best, especially given the later meaning of the wedge as an accent. Beethoven appears to be drawing the staccato dots as lines in haste and perhaps to make them more visible. I see no other significance to these indications beyond being staccato markings. Of course, the staccato indication itself can have different meanings depending on context. So there are cases where he seems to be using it also as a mild accent mark.

Beethoven’s mature music manuscripts, while certainly not pretty, have their own special beauty. They are economical, forceful, confident and clear, just like his music. Of course, there are a few examples famous for illegibility in which he is making corrections on pages that he should have written out anew, but these are rare. And there is dramatic decline in clarity in the sonatas after op. 90 and in a few places in earlier works where he literally seems to be going to pieces with excitement and can hardly set the music down quickly enough.

The following couple of pages from the first movement of the Sonata op. 26 might serve to illustrate some of these impressions. Many digital reproductions of his manuscripts are available. See http://www.bu.edu/beethovencenter/beeth ... hs-online/ 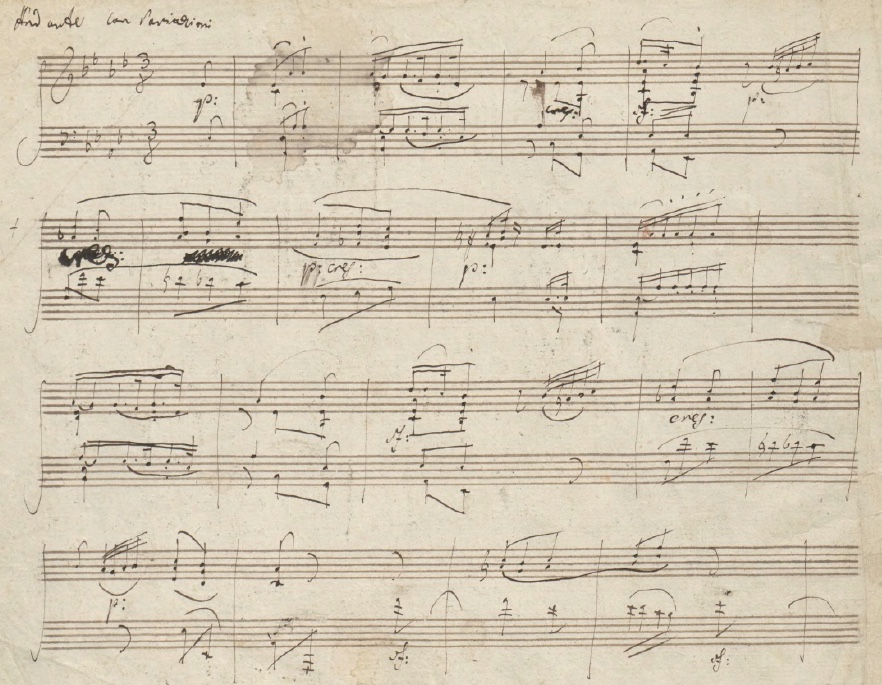 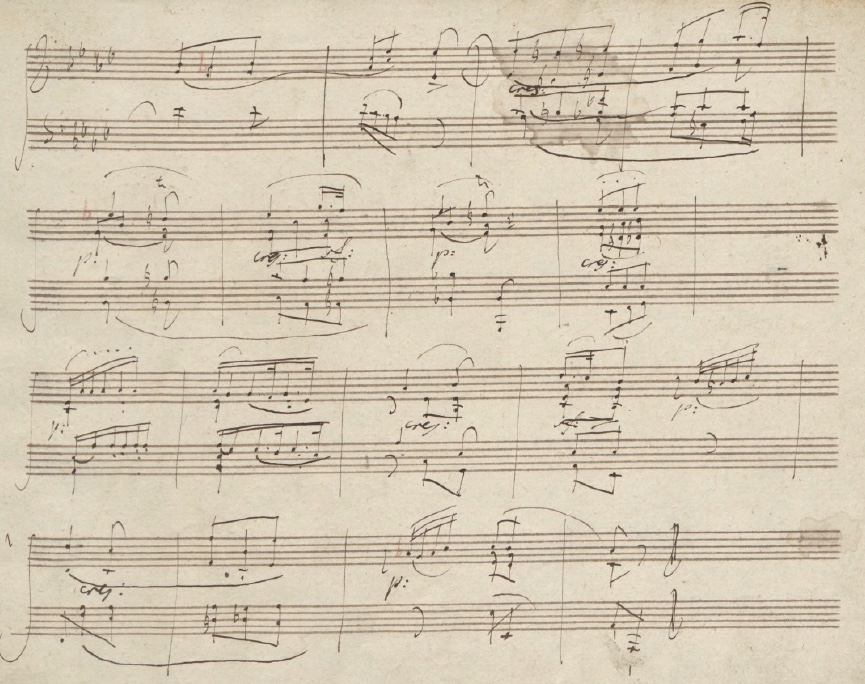