The first statement of the rondo theme in the second movement of Beethoven's Sonata op. 78 creates immediate questions:

1 The down stems for the first three right hand chords make them strongly contrast with the up-stemmed following phrase. This stemming has not been followed by any edition known to me. He might have preferred to reverse this and use up stems for the forte statement, but the softer group goes a little too low for down stems. It also would have prevented using the lower staff for the last chord. Now, given this theory, shouldn't the chord at 1 be up-stemmed like the ones that follow?

3 The position of the clef change after 3 is strange. Shouldn't this chord be included in the bass clef along with the rest of the following phrase? Beethoven is usually very careful about the position of clef changes.

As if hearing my questions, Beethoven answers them all in the first repeat of the rondo theme: 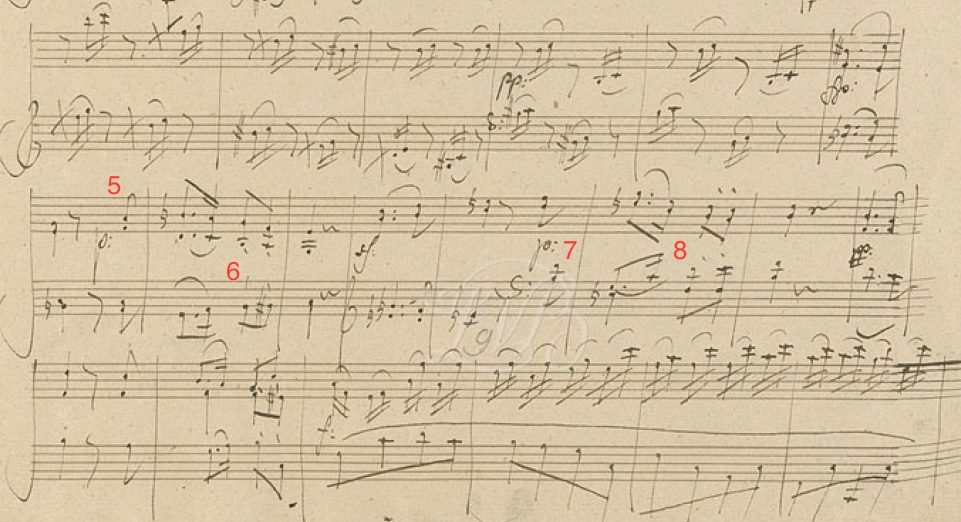 He again down stems the opening three chords, which shows that this stemming is intentional. Then at 5 he corrects the stemming at 1, having now accepted the strange juxtaposition of down and up stemmed chords in this measure as a better notation then originally.

Having apparently decided at 4 that he really should put in the staccato dots in the left hand, he continues this style 6 and 8. He also adds the missing left hand slur at 8. Note that the slur falls on the note head side, which was always his preference when possible.

At 7 He corrects the bad clef change at 3.

And there other reasons that the opening chords are down-stemmed:

1. Structurally, the melody in measures 1-2 leads directly to the down-stemmed melody notes in measure 5-8 of the first example. The down-stemming brings out this relationship. Measures 3-4 represent a kind of interpolation within that overall structure and deserve to be distinguished as such.