In the slow introduction to the last movement of Beethoven’s Sonata op 101, the swell large swell marked with an arrow has been applied to the cadenza on the third system in the first edition (shown as the second example) and all subsequent editions that I am familiar with. 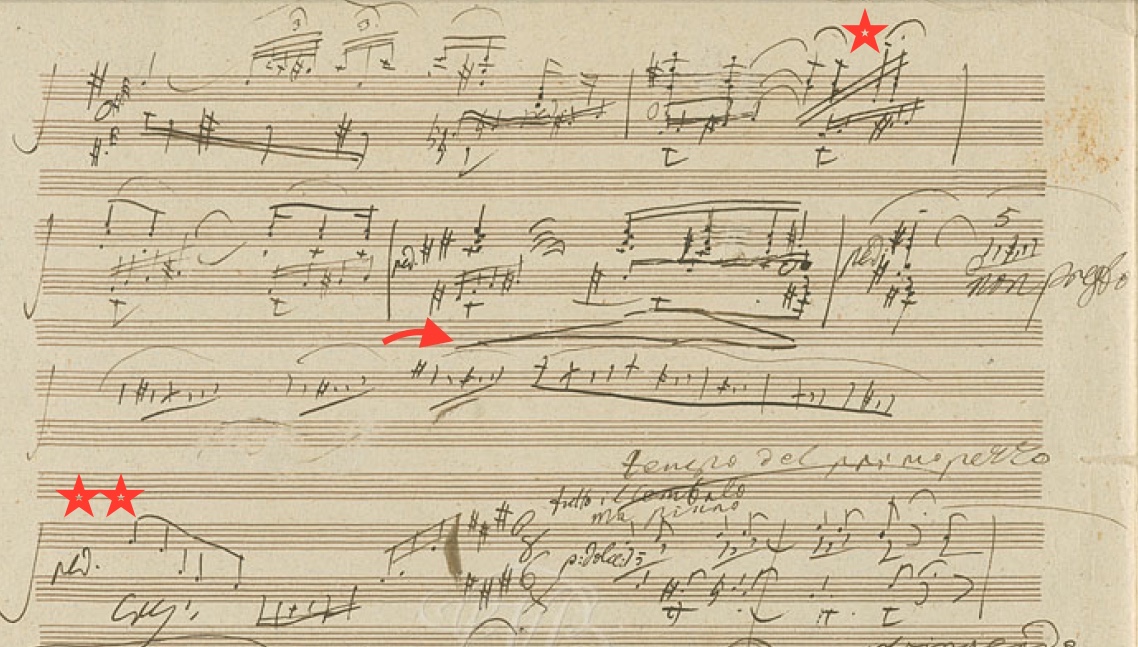 Is it possible that this swell actually pertains to the staff above?

The strange peak of this swell on the neighboring note D# puzzled the original engravers, who moved it to the following G#. But it is clearly the B at the beginning of the beamed group that would be the natural peak note.

The swell is exactly the length of the measure above it and its peak falls quite near the peak tone in the right hand. This degree of imprecision regarding hairpins was normal for Beethoven. Beethoven often placed hairpins above or below a system when there was no room between the staves. This can be seen in the very first measures of the Sonata:

Is it possible that Beethoven wanted an intense swell to accompany this intense moment in the piece followed by a drop to the following cadenza measure, which is to be played very delicately.

But why wouldn’t Beethoven have corrected this error in the first edition? Perhaps he attempted to correct it by adding the cresc. and P in the next measure which do not occur in the MS. The cramped space in the first edition made a perfect correction very costly since it would involve reengraving the entire page. Then he left the erroneous swell marking as harmless since a small swell shaping would be implicit in such a passage.

What do Notat.io readers think?

Two other moments are of interest in this passage. Note the centered beaming at the end of the second measure right hand and marked in the first example with a star. That Beethoven resorted to such tortured notation illustrates again his use of stem direction as a kind of phrasing or even “instrumentation”. The last two notes had to be up-stemmed to lead to the up-stemmed notes in the next measures, yet the first notes had to be down-stemmed to show that they represent a new color in contrast to the previous measure. Beethoven’s notation is impossible to engrave and the solution in the first edition is probably the only viable one. Beethoven would not have broken the beam before the last two sixteenth notes because this would have indicated a phrasing break that he did not intend.

Another interesting moment occurs at the end of the cadenza marked by two stars in the first example. Note that the MS and first edition start a new beam at the beginning of the rolled E major chord. Beethoven even lays out the passage so that arpeggio starts a new line to lead to the music that follows. Yet all modern editions do not break the beam. This tradition is shown in the Schenker edition:

Why something so clearly in opposition to the composer’s intention has crept into later editions, even the best ones, is hard to understand. This is not the only case that I am encountering in editing Beethoven's piano sonatas.
Mac mini (OS 10.8.5) with dual monitors, Kurzweil Mark 5 with M-Audio Midisport 2 x 2,
Finale 2014d with GPO 4, JW Plug-ins, SmartScore X Pro, Adobe InDesign CS4,
Inkscape .48.5 and .91, FontForge 20150526
http://www.cantilenapress.com
Top
Post Reply
1 post • Page 1 of 1