But the dot is again missing in the corresponding note, E-flat, at the beginning of the development. (See A in the second example.) Some editions, like the Schenker edition, have therefore accepted the absence of the dot as intentional and removed the dot at B in examples 1 and 3. 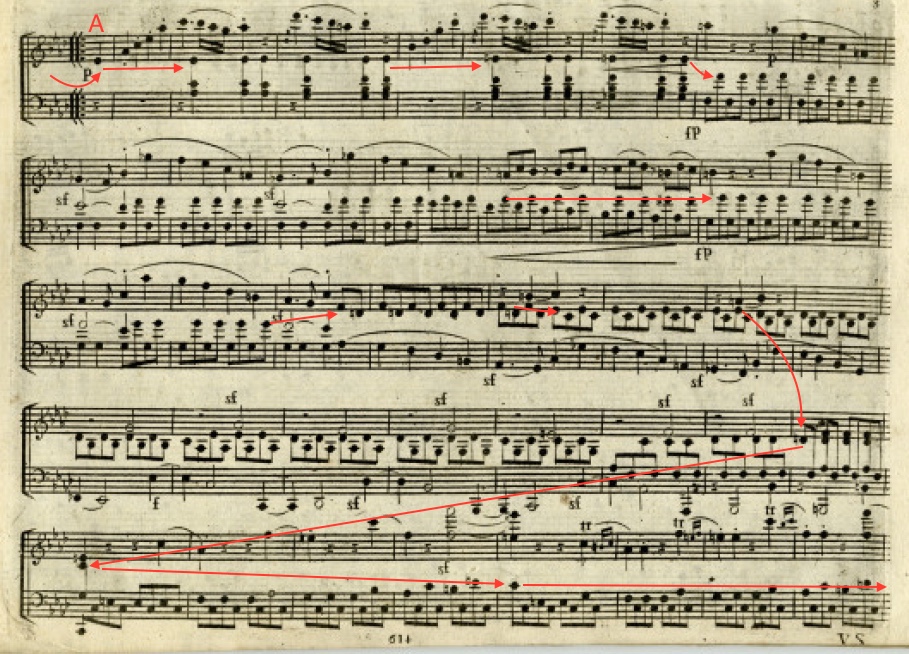 While I think that the second choice is better than the first, internal evidence suggests to me that the original edition is correct as written.

As shown by the arrows in all three examples, the initial middle C and the notes that follow from it are a kind of middle melody that has an independent life of its own of greater importance than the normal filler middle voice. It is as if Beethoven has made it a kind of motive.

Note that in example one at first it acts as a pickup to and part of the main staccato motive, but then immediately becomes part of the non-staccato repeated chord accompaniment. Before long it has moved upward though the notes D-flat and D-natural to E-flat which it is heard through much of the rest of exposition and in its final cadence. This E-flat then begins the development section and after another rise to G moves down to the initial middle C (example 2) , where it is sustained as a long pedal tone to connect to the recapitulation (example 3). This transitional section sounds like a gigantic expansion of the opening pickup note of the piece:

In all of these cases, the middle notes are sustained as if in opposition to the staccato opening motive. At B, the pickup is staccato because it is not part of the middle voice and would therefore be more natural matching the rest of the opening motive.
Mac mini (OS 10.8.5) with dual monitors, Kurzweil Mark 5 with M-Audio Midisport 2 x 2,
Finale 2014d with GPO 4, JW Plug-ins, SmartScore X Pro, Adobe InDesign CS4,
Inkscape .48.5 and .91, FontForge 20150526
http://www.cantilenapress.com
Top

I think you are right. The non-staccato at the beginning seems to be in the "same" spot each time. The staccato or lack thereof seems non-random; I think it's correct.
Top

John, these are all fascinating threads. Thank you very much for taking the time to share your thoughts here. I look forward to studying and playing from your Beethoven edition once it is available.

By the way, have you finished the Chopin etudes?
Top

Thanks, ttw. That is a very succinct summary of why the text seems correct to me as well.

Thank you very much for your encouragement, Florian. I am working on the initial text of op. 106 now and will be getting to the actual editing (fingering and pedaling and footnotes) of all the sonatas soon. The Chopin Etude edition is finished (aside from a few changes that I may make to the opening section on technique), but resting so that I can view it from fresh perspective. After resuming work on it, I will try it out with private students to catch errors before offering it for sale publicly.
Mac mini (OS 10.8.5) with dual monitors, Kurzweil Mark 5 with M-Audio Midisport 2 x 2,
Finale 2014d with GPO 4, JW Plug-ins, SmartScore X Pro, Adobe InDesign CS4,
Inkscape .48.5 and .91, FontForge 20150526
http://www.cantilenapress.com
Top

Having played this movement from the Schenker edition so many times, I never would have noticed this detail of voicing before; but, looking over the remainder of the score and precisely how the motivic fragments are used, it makes perfect sense.

More and more, I feel as though I am "robbed" of great composers' notation and, by extension, the most perfect interpretation of their works.
Top

Thank you John for pointing out all these details of Beethoven's notation. It's really thought-stimulating. So, in the case of the missing staccato, I'm wondering: It's very convincing that the C has a structural significance in the main theme section (and others), but would that in any way be weakened if it were played staccato at the beginning? It's also possible that the chords in the left hand would be played rather staccato (in any case not softly portato?)
Also, how to interpret the missing dot(s) when performing? If played just 'non legato', would it give a decisive enough start to this very youthful work? Just a thought.
Finale 26 on Windows 7 and 10
Top

I just came across Malcolm Bilson's lecture on "Knowing the Score" on Youtube. At 4'50 he mentions the Beethoven Sonata. He is not bothered by the missing dot at the beginning, because, well, an upbeat is always short and light, so why add an extra dot, it's kind of understood how to play it. This, of course, doesn't explain why there is a dot a few bars later in the left hand. Unfortunately, he doesn't talk about that; I wonder what his thoughts are on why there is a difference in notation.

For me, whatever Beethoven's intentions were in notating the passage that way: it doesn't change the way the passage is supposed to be played. There might be a "hidden" massage in leaving out the dot (was Beethoven prone to esotericisms like that?), but that's for the musicologists to ponder. The practitioners can go on with their business as usual. Or can they? After watching Bilson, I looked up some "masterclasses" on the sonata. And sure enough, there are teachers that say: if there is a difference in notation, there must be a difference in playing; the first upbeat must be longer than the staccato notes that follow ... which just sounds wrong (an which, according to Bilson, is against all rules of "period performance").

So I wonder if by honouring Beethoven's notation we might, at times, do him a great disservice, because interpreting a score from that era doesn't simply involve READING the score but also knowing the context, the practice of the time etc.; it needs hermeneutical work, so to speak. Urtext editions might do, at times, more harm than good.

Schonbergian, I too feel "robbed" as I encounter Beethoven's ingenious and very helpful notational features that were altered in the first editions and even in authentic editions like Schenker's.

Anders, I play the pick-up note the same length as the portato repeated C’s that occur before the recapitulation so that they refer to each other: about 7/8 the written value as a contrast to the staccato notes at about 1/2 the written value. I try to make this difference quite apparent in the performance. It is as if the first note is a prelude to the entire piece, rather than simply part of the four note staccato motive that follows. I also think that it gives more "gravity" to a piece that can sound at odds with itself in terms of mood, which I think is darkly tragic. The Sonata op. 2 no. 3 is sometimes called the "little" Waldstein because of relationships between the two works. For me, op. 2 no. 1. is the "little" Appassionata."

I play the repeated chord accompaniment non legato as “marked”. While it represents a rhythmic imitation of the right hand, I feel that playing it staccato gives it a little too much importance and takes away from the upper melody, even if played very lightly. It also takes away from the "gravity". However, Beethoven, like other Classic style composers often omitted articulation markings for the lower staff accompaniment patterns for various reasons, so there is a possibility that staccato was implied. Editions have gone both ways on this.

liuscorne, as you can tell from my responses to Schonbergian and Anders Hedelin directly above, I feel that notational matters should make a big difference in performing Beethoven’s music and that Beethoven’s creative use of notation transcended “period” conventions of his and our time, just like his music. The only "rules" he abided were the rules of strict counterpoint and figured bass, and sometimes he goes to the outer edge with those, so I am not sure that he would feel bound by "rules of period performance". In my opinion, historical information is very useful, but the best way to an “authentic” performance of any piece of music is to understand its structure and import on its own terms.
Mac mini (OS 10.8.5) with dual monitors, Kurzweil Mark 5 with M-Audio Midisport 2 x 2,
Finale 2014d with GPO 4, JW Plug-ins, SmartScore X Pro, Adobe InDesign CS4,
Inkscape .48.5 and .91, FontForge 20150526
http://www.cantilenapress.com
Top

John, I didn't mean to suggest that "period convention" trumps the individual genius of Beethoven. However, his unique way of composing (and notating) music can still be interpreted only within the context of his time. And with regard to the "missing" staccato dot on the first note, the question remains: How are we supposed to play the note? You suggest there should be a clear difference to the staccato notes that follow. Mr Bilson seems to think there shouldn't be; if Beethoven wanted a longer note with greater emphasis, he would have notated the passage differently (for instance with a slur, as in the last movement of Mozart's Symphony No. 40); so the "rules of the time" apply, as it were.
I happen to agree with Bilson (not because I know enough about period performance, but mainly because I like this version better); so I think in this particular case the difference in notation doesn't make a difference in performance. It would be interesting to ask him about the Beethoven Sonata in light of the analysis you presented above.
Top

liuscorne wrote: ↑
08 Aug 2019, 21:29
if Beethoven wanted a longer note with greater emphasis, he would have notated the passage differently (for instance with a slur, as in the last movement of Mozart's Symphony No. 40); so the "rules of the time" apply, as it were.

I think that this movement, while not difficult to play, is not easy to fathom, and this strongly influences one's opinion about the opening note. Schnabel added a staccato dots in his edition, Arrau eliminated the ones in 8 and 108 etc. For me, a slurred upbeat alla Mozart, like an initial staccato, lightens the mood too much for my conception.

It is interesting that Beethoven actually does slur the upbeat when the opening motive occurs in inverted form and with a completely legato articulation as bars 21-22 etc. (See the last note of the second line and third line of example 1.) The slurred upbeat F-flat with its resolution becomes a very important force for the rest of the piece. How this bears on the question of the opening pickup is not completely clear. However, if Beethoven had wanted the opening pickup note of the piece to be distinguished from what follows because of its importance in generating the transition section at the end of the development, but not completely connected to the following note to preserve the contrast between the all-detached version of the motive and the later all-legato version, his only option was to notate it as appears in the first edition.
Last edited by John Ruggero on 09 Aug 2019, 13:59, edited 1 time in total.
Mac mini (OS 10.8.5) with dual monitors, Kurzweil Mark 5 with M-Audio Midisport 2 x 2,
Finale 2014d with GPO 4, JW Plug-ins, SmartScore X Pro, Adobe InDesign CS4,
Inkscape .48.5 and .91, FontForge 20150526
http://www.cantilenapress.com
Top
Post Reply
16 posts