In Schenkerian theory, complete melodic closure of an upper structural voice only occurs when the first note of the scale is reached, which is what happens at the main cadences of most tonal pieces of the 18th and 19th centuries. Pieces in which this doesn’t happen give an indefinite impression. One example is the first piece from Schumann’s Scenes of Childhood, which circulates entirely around and ends on the third note of the scale. Of course, this piece is the first of a Romantic cycle, and the indefinite ending serves to connect the piece to what follows. This unusual ending may also explain the Schumann’s enigmatic title “Of Foreign Lands and People”.

Of course there are many cases in which the final melody note of a large work is not the tonic, but at the end of a poetic coda that has followed a normal ending on the first note of the scale. In the example from Beethoven’s Sonata op. 14 no. 2 the main cadence is shown at the arrow. The Coda embellishes the third note of the scale, which has been an important structural tone throughout the movement. 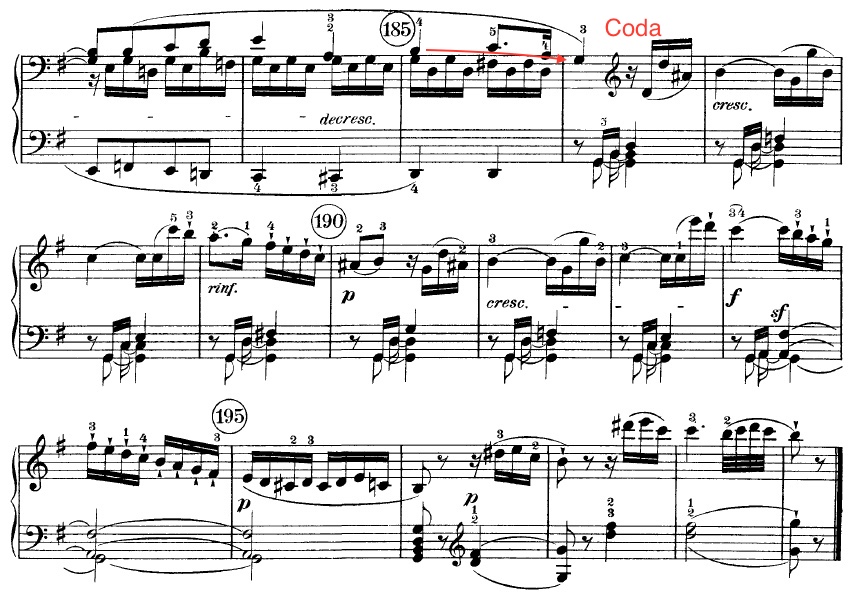 Beethoven’s Sonata op. 109, however, seems to be the rare case in which a large single work actually ends on the third note of the scale without a previous stronger structural ending.

When the theme of this set of variations is first stated, its inconclusive ending on the third note of the scale is a perfect way to connect the sections without the intervention of constant complete closes at the end of each variation. Beethoven writes the final cadence of the theme with a single stem for each of last two chords :

But when the theme is restated at the end of the sonata, subtle changes occur: the addition of a few bass octaves, the subtraction of two written-out arpeggios etc. that give a new feeling to the theme. Along with this, Beethoven rewrites the final cadence giving the lower voices their own stems:

In my opinion, this means that the F#-E alto voice should brought out to bring finality to the work, with the A-G# above played lightly as a poetic reference to important notes used throughout the whole sonata. In this way, the feeling of intense longing that G# brings throughout most of the sonata is maintained while at the same time our desire for closure at the end of a long piece is satisfied.

Maybe the last example could be interpreted the other way round: that the upstemmed notes at the end are the more important ones, letting the sonata end poetically hanging in the air. And closing at the starting point of the whole work as well as of this movement: the third. Just an idea. I can see your point too.
Finale 26 on Windows 7 and 10
Top

Anders, I think you are right that it could be interpreted that way too if someone wants to emphasize the "hanging in the air" quality over a more definite ending. What is most important is that the soprano and alto voices be carefully voiced to bring out their independence, which is not the case at the end of the first statement of the theme.
Mac mini (OS 10.8.5) with dual monitors, Kurzweil Mark 5 with M-Audio Midisport 2 x 2,
Finale 2014d with GPO 4, JW Plug-ins, SmartScore X Pro, Adobe InDesign CS4,
Inkscape .48.5 and .91, FontForge 20150526
http://www.cantilenapress.com
Top
Post Reply
3 posts • Page 1 of 1