It is well-known that Beethoven meant slurs in his piano music to indicate legato—not to show the beginnings and endings of phrases (the so-called “phrase marks” added by later editors). What is not so well-known is that Beethoven does not slur over the repetition of a note in a melody, even when it is part of an legato phrase.

The same slurring is confirmed when the passage recurs at the end of the piece: 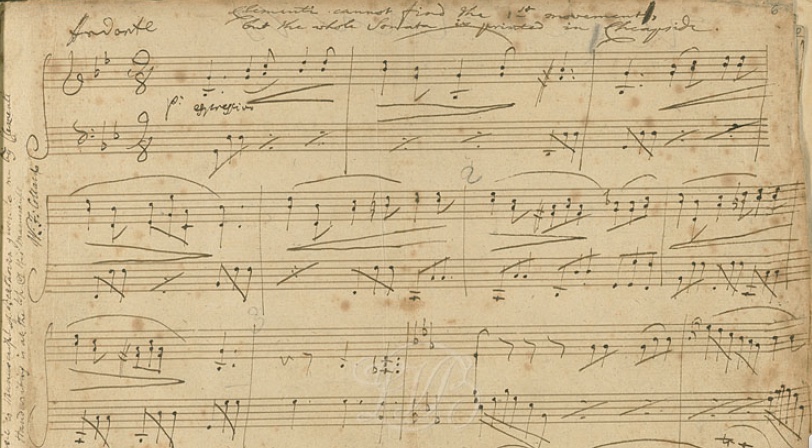 Here is his use of the portato indication for repeated notes that are semi-connected: 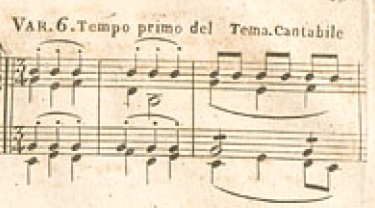 Here is an interesting example from the second movement of Beethoven’s Sonata op. 109 where the phrase is slurred as a group of four notes the first time,

but as a group of three later, when the last note of the phrase is displaced by an octave, thus making a finger connection impossible. For this reason, he probably did not intend an audible break before the last note.

The first editions preserved Beethoven's usage. Later editions tend to “correct” this along the lines of later nineteenth century music. It is interesting that Schenker, who may have been the first to forcefully decry the distortion of the original slurs and addition of editorial “phrase marks” was possibly unaware of Beethoven’s practice and unconsciously influenced by later practice. Schenker even “corrected” the slur in the first two examples from op. 109, but not the following one from op. 110, where he felt that Beethoven intended a non legato between the repeated notes in reference to the staccato motive of measure 3. 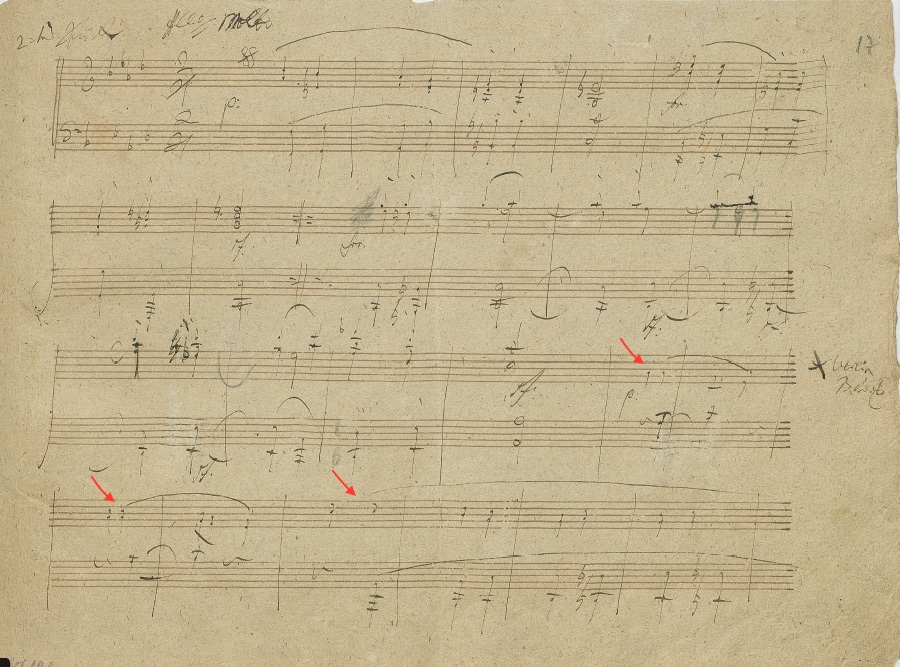 From these examples, it seems clear to me that Beethoven considered the overlapping of successive notes by means of the fingers to be the essential characteristic of legato on the piano. If this were not possible, as in the case of successive notes of the same pitch (see footnote*), he didn’t write a “conceptual” slur to indicate connection by means of the sustaining pedal, by semi-connection by the fingers, by arm gesturing, or by imaginative use of nuance etc.

From this it may be deduced that finger overlapping of notes within slurs can be regarded as an absolute requirement in Beethoven’s piano music. Why else would he have made a notational distinction for repeated notes?

Since unmarked tones are normally played non legato in the Classic style, the unmarked repeated notes of the same pitch must be regarded as an exception to this rule for Beethoven’s piano music. The articulation of such notes can only be determined by context.

Footnote* On a modern piano, notes can be connected to themselves by allowing the key to rise slightly and then replayed, maintaining the damper off the strings and thus the sound itself. This was not possible on Beethoven’s piano, but even if it had been, it is possible that he might not have considered this technique to be a true legato because there would be no overlap of two different pitches. This moment of overlap that mimics the glide between pitches possible by the voice and other instruments seems to have been an essential characteristic of legato for Beethoven.
Last edited by John Ruggero on 05 Aug 2019, 14:50, edited 4 times in total.
Mac mini (OS 10.8.5) with dual monitors, Kurzweil Mark 5 with M-Audio Midisport 2 x 2,
Finale 2014d with GPO 4, JW Plug-ins, SmartScore X Pro, Adobe InDesign CS4,
Inkscape .48.5 and .91, FontForge 20150526
http://www.cantilenapress.com
Top

I wonder how one might best extend these thoughts to Beethoven's various bowing, slurring and other legato markings in his orchestral string writing. There was a style of playing in the mid-20th century (Karajan et al) in which slurred and unslurred notes tended to sound identical: one could not hear the bow changes or even sense where they occurred. I always took the view, though by instinct rather than authentic period knowledge, that one was probably supposed to be able to hear a clear distinction between legato and non-legato.
Finale 25.5 & F 26.2.2
Mac OS 10.13.6 & 10.14.6
http://www.composers-uk.com/davidward/news.htm
Top

How are we to view this passage from the Op. 10 No. 1 sonata, where legato by means of finger connection alone seems impossible? 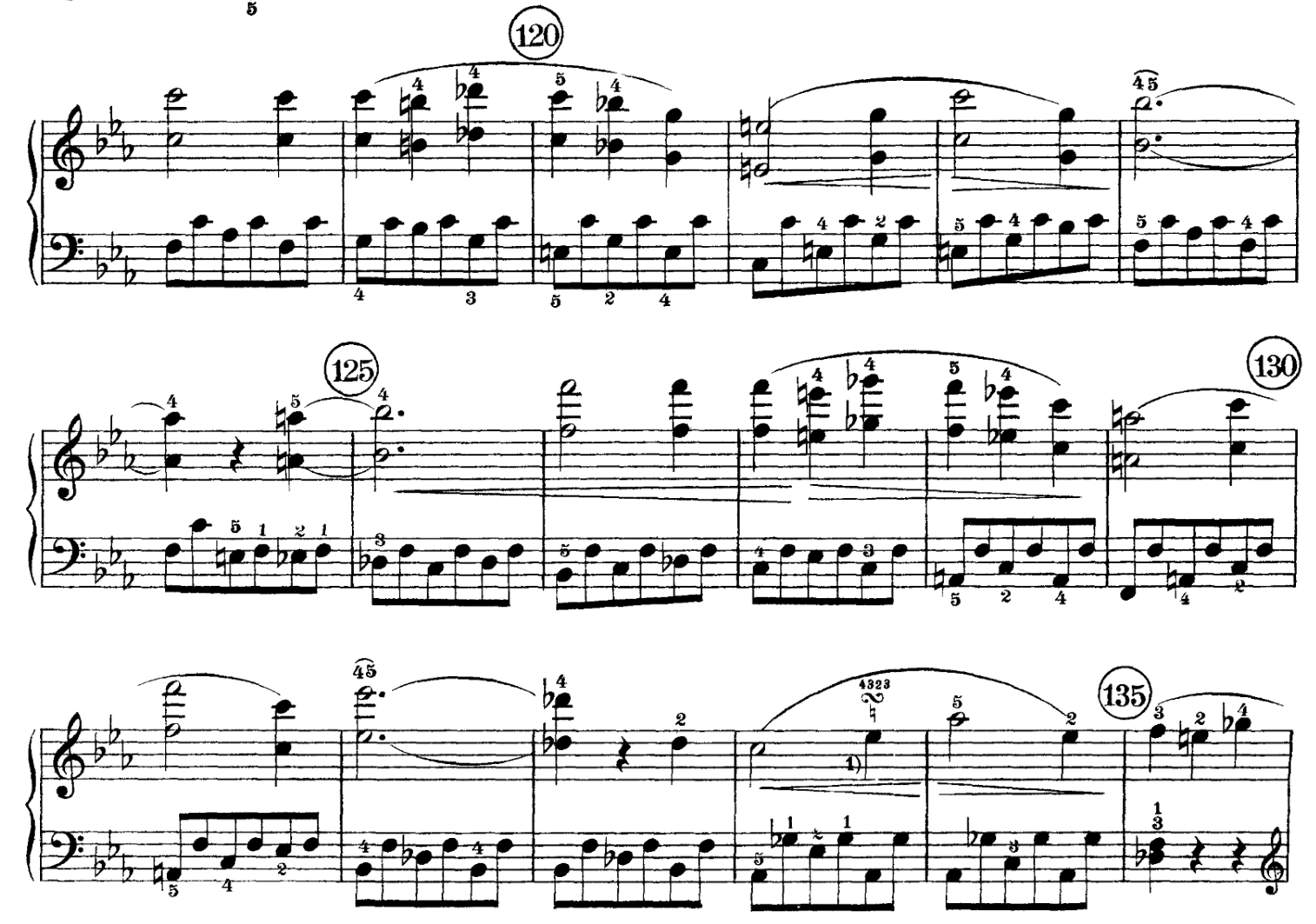 Exactly how Beethoven fingered such passages is unknown. My fingering differs from Schenker's in that I use finger interchanges as necessary to do the connections. And sliding with the same finger between neighboring white keys so that one feels a key bed to key bed connection is certainly possible on modern pianos and probably easier on the early pianos, so Beethoven may have considered sliding to be a true legato, as evidenced by the slurs over the octave glissandos in the last movement of his Sonata op. 53. However, at least at this point, I don't think that he considered arm motions (gestures) alone to constitute a true legato, as did Chopin, or he wouldn't have stopped the slurs in example 7 above. But not all the evidence is in.
Mac mini (OS 10.8.5) with dual monitors, Kurzweil Mark 5 with M-Audio Midisport 2 x 2,
Finale 2014d with GPO 4, JW Plug-ins, SmartScore X Pro, Adobe InDesign CS4,
Inkscape .48.5 and .91, FontForge 20150526
http://www.cantilenapress.com
Top
Post Reply
5 posts • Page 1 of 1