Many have considered Beethoven’s metronome markings to be too fast, and the result of a faulty metronome, a deaf composer’s “inner hearing” or error. The Sonata op. 106 is a particularly sore point. The opening movement is marked at a ferocious half note = 138, the final fugue at an equally ferocious quarter note =144. Even the scherzo (dotted half = 80 and slow movement (eighth note = 92.) seem too fast. Perhaps all of these tempi should be marked down proportionally?

In trying to solve this riddle, I considered the following external evidence:

1. Beethoven was very concerned about his music being played at the correct tempo and serious about the metronome. He continually had it regulated.

2. His student Czerny generally suggests rather “normal” metronome markings in his book on the performance of Beethoven’s piano works, yet recommends Beethoven’s own indications for op. 106 without a quibble. He also mentions that this sonata must be “well-practiced”, which must be the understatement of all understatements, but implies that this sonata is something special from the technical point of view.

3. Of his piano sonatas, only op. 106 has metronome markings. Is it because Beethoven felt the correct tempo was not only critical, but unusual? 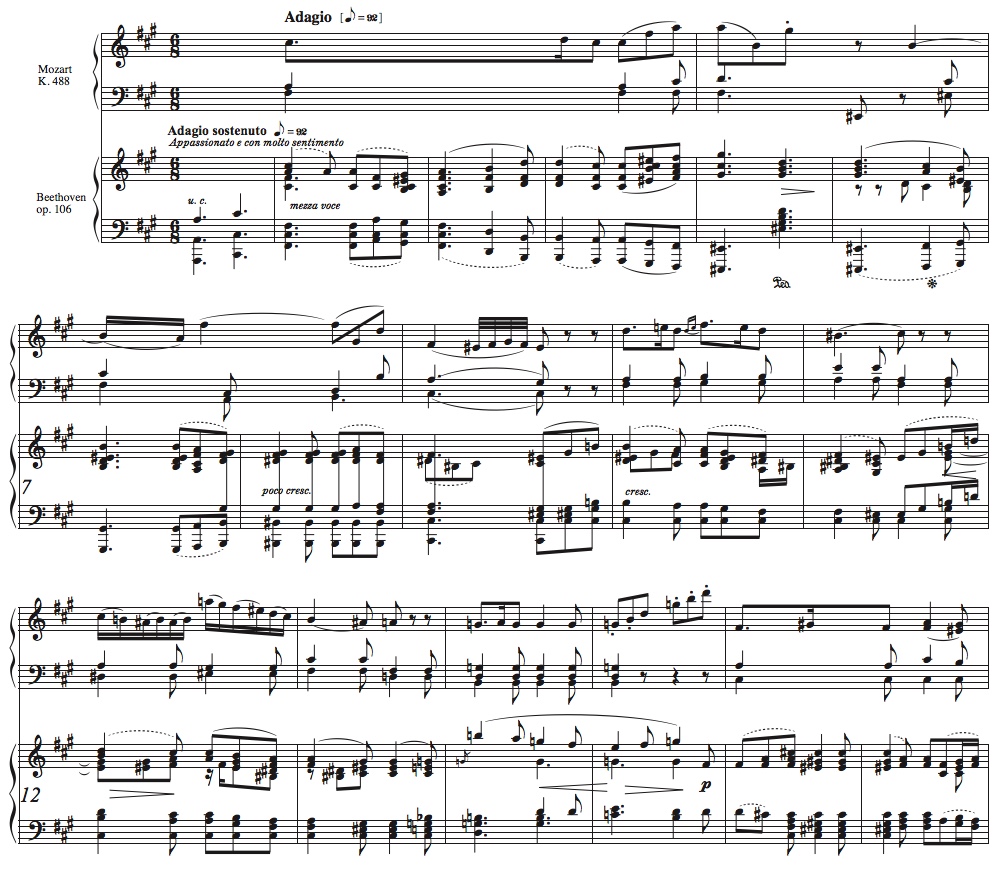 The relationships seems so strong to me that it is possible that Mozart’s movement influenced Beethoven when he wrote his own piece in a very similar mood. Since Mozart’s slow movement may be played convincingly at eighth note = 92, but not much slower, I think it reasonable to imagine that Beethoven thought of his own slow movement as being in the same tempo.

I also considered the following internal evidence: while some sections of the sonata can work at various tempi, many passages rely on a rapid tempo to be convincing. Examples:

1. It is impossible to imagine the introduction to the Fugue (which Beethoven marked at a sixteenth note = 76) at a slower tempo; and for this reason, it is the one marking that has never been disputed. (This makes the faulty metronome theory problematic.)

2, The opening section of the scherzo works at various tempi, but the strange stagnancy of harmony of the middle section requires Beethoven’s rapid tempo to become the ghostly affair he intended.

3. ms. 1-24 of the first movement can sound majestic and impressive even at half tempo, but ms. 25-33 lose their wild excitement and fall flat. Similarly ms. 39-63 sounds like a tedious exercise at a slower tempo. At Beethoven’s tempo such passages become exciting swirls of sound, which may have been a new effect that he was exploring in this sonata.

4. In the fugue, the stretto in augmentation in ms. 116-125 is incomprehensible at a slow tempo, and the interlude at m. 250 stagnates at anything other than a very fast tempo.

In summary, I believe the metronome markings to be correct as marked. We know that Beethoven intended to write a monumental work, a piece that would go to the outer limits of what he could conceive of for the medium and the outer limits of what a pianist can perform. The metronome markings were a well-considered part of the challenge. In fact, because Beethoven was exploring the possibilities of very fast tempi in a piano sonata, the sonata relies on these tempi to be convincing.

John, playing devil's advocate: do you believe that the theory advocated here (https://www.youtube.com/watch?v=0sgkls8XEt8), that these metronome markings were used radically differently in Beethoven's time, holds any weight when it comes to the Hammerklavier at least?
Top

My goodness, Schonbergian, what strange theories one can find on the internet. Is he proposing that we have been playing ALL of Beethoven's music (plus Chopin's and Schumann's etc.) twice too fast? The thought of a 1.5 hour Hammerklavier Sonata is very unappetizing. Or is it just the first movement of op. 106 that is twice too fast? That theory has surfaced before in a different guise, but for me the piece is tedium at that tempo.

Czerny knew Beethoven personally, heard him play his music, played his music for him, and was given the honor of premiering the Emperor Concerto. For me, the most surprising thing about Czerny's metronome markings (for practically every piece Beethoven wrote that includes the piano) is that there is no surprise at all. They are remarkably like what we do today.
Mac mini (OS 10.8.5) with dual monitors, Kurzweil Mark 5 with M-Audio Midisport 2 x 2,
Finale 2014d with GPO 4, JW Plug-ins, SmartScore X Pro, Adobe InDesign CS4,
Inkscape .48.5 and .91, FontForge 20150526
http://www.cantilenapress.com
Top

Has anybody here heard Igor Levit's recording of Op 106? I expect he has the mechanical technique to play all movements at metronome speed: but does he? I know Brendel regards the metronome markings as plain wrong, but I (who can't possibly play Op 106 at any speed, except in my head) would love to think they are correct and have read through the piece convincingly in my imagination at the marked tempi. (A risky thing is imagination!)
Finale 25.5 & F 26.2.2
Mac OS 10.13.6 & 10.14.6
http://www.composers-uk.com/davidward/news.htm
Top

Thanks for your thoughts, David. It sounds like you have considered question for some time. Are you happy with your mental performance of the last movement?

The Beethoven quote: "This sonata will keep pianists busy for the next 75 years." Can't remember where I read it. In any case, it is another understatement. We are all still very busy with the piece after 200 years.

Does anyone knows of ANY recorded performance that achieves Beethoven's tempi successfully? Schnabel had an excellent conception of the first movement as a fast piece, but not enough technical command to quite bring it off. He was much less convincing in the fugue. His middle movements are too slow. Various other versions I sampled online use the "safe" half note = 112 that goes back to Bulow's edition.

I just did a calculation of the duration of the sonata using Beethoven's tempi. About 35 minutes. Closer to the durations of his other big sonatas.
Mac mini (OS 10.8.5) with dual monitors, Kurzweil Mark 5 with M-Audio Midisport 2 x 2,
Finale 2014d with GPO 4, JW Plug-ins, SmartScore X Pro, Adobe InDesign CS4,
Inkscape .48.5 and .91, FontForge 20150526
http://www.cantilenapress.com
Top

Your comments on this precious piece of music was really inspring, John. Another excerpt from the third movement may make it impossible to believe that Beethoven didn't have Mozart's music in his his mind at the time: 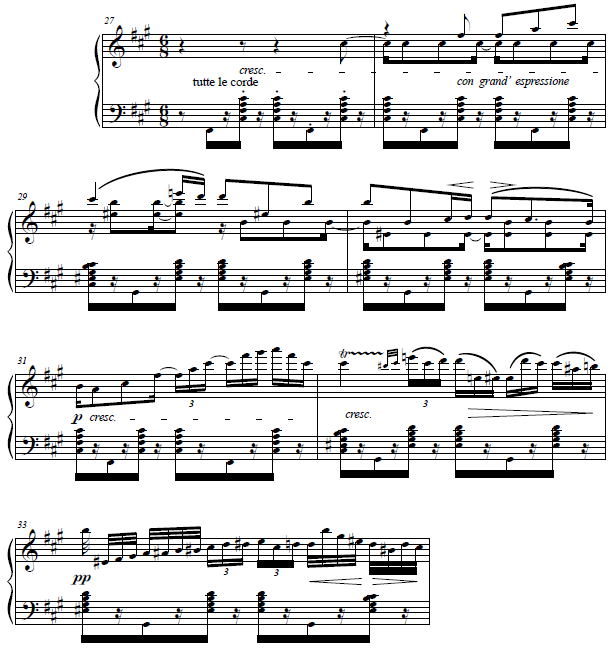 I would like to ask you, what you make of the unusual notation of the accompaniment - sixtenths with sixteenth rests, and, as if that wasn't enough, at the beginning of the section with staccati! This, in a way, led to an animated discussion among some of my pianist friends having heard Grigory Sokolov performing the sonata and playing this accompaniment really staccato. Schnabel plays it tenuto, and with true grand' espressione.

I had an idea, since this, and the sonata as a whole, is written in such an orchestral way, that the accompaniment might have been conceived as pizzicato, leaving space and air to the expressive soloist(s). Now, a pizzicato in low strings is quite resounding, and not very well represented by a short and dry staccato on the piano. I didn't hear Sokolov myself, but I would have thought it strange if he made the accompaniment too dry.
Finale 26 on Windows 7 and 10
Top

Thank you very much, Anders! How true that the next section, which starts off as a kind of rumination on the opening theme, gets close to the opening of the Mozart. It also reminds me of the haunting orchestral section that follows the piano solo.

I have always assumed that Beethoven expected continuous overlapped pedaling in this section, and the marked articulation means to play very lightly, possibly quasi. pizz. as you say, letting the bass notes in particular sustain in the pedal. He therefore gets very close to Chopin's style in this movement and also in other places in the sonata.

If you've ever played Beethoven on a period instrument (or a good, modern copy), many aspects of intention and interpretation can become clear. Beethoven owned (among others) a Broadwood grand piano and since the damping on the English instruments of the time was fairly slow or, in any case, nowhere near as abrupt as we're nowadays accustomed to hearing, playing the above passage on such an instrument yields an effect all but impossible to achieve on a modern instrument. Even when played without pedal, the left hand part would be very gently articulated, a little like singing each note on a syllable ending with 'm'. In addition, these instruments were straight-strung (as they were for the decades which followed), which preserves the piano's sound registers and, in this example, creates a beautiful distinction between the left hand part in the tenor-bass register and played staccato, and the right hand part in the treble, played legato. This is a far cry from the modern piano's ideal of uniformity throughout. Although Beethoven had been deaf long before the composition of Op. 106, it's not unreasonable to assume that he may still have had the sound of the Broadwood lingering in his memory.
Top

A very interesting comment, Vaughan! As for Sokolov knowing about this, I'm not sure, so I'll place no bets there.
Finale 26 on Windows 7 and 10
Top

I agree with your description of pizzicato as not being synonymous with a 'short and dry staccato', certainly when you've heard it imitated on an instrument with slightly 'wet' damping. One of the reasons I'm also playing devil's advocate, like Schonbergian above (I remember when that half-tempo theory was popular!), is because it's sadly still looked upon as a 'fringe activity' to get to know composers' music in their original language via an understanding and appreciation of the instruments on which their music was composed. One of the many aspects of interpretation which is greatly affected by playing on original instruments is tempo, although, having said this, those instruments won't help significantly with understanding Beethoven's wildly fast metronome markings in Op. 106. David Ward's modest remark above reminded me of something very important. I can imagine Op. 106 in these tempi as long as I don't have to play them that way physically. If you've ever played with singers and have asked them what tempo they'd like, they'll hum their melody in a tempo which is generally at least 50% faster than what they end up singing. And this doesn't only go for singers. 'Conceptual' tempi are almost always faster than 'actual' ones. Could this what's behind Beethoven's tempi, especially considering that by that time he had nothing else to go on besides his imagination?
Top
Post Reply
14 posts