At the place where the fugue subject comes in in augmentation in the last movement of Beethoven's PIano Sonata op. 106, there appear to be several errors in the first edition: 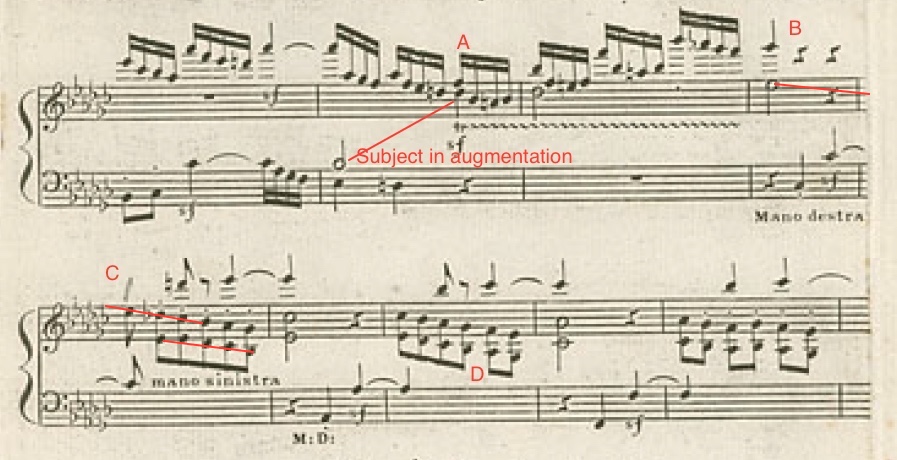 At A the tie over the bar line for the trill was omitted. This is probably an uncorrected error in Beethoven's MS or an oversight in the first edition.

At B the two quarter rests seem to be an error because the right hand is crossing over the left and not resting as notated in the measures that follow. However, this is probably not an error, because the conventions of using rests to show the absence of a fugal voice clash here with the convention of showing cross handed playing in keyboard music. Beethoven's compromise solution is to show the presence of the three voices by means of the rests in the first measure only. A very logical decision.

At D the break in the beam here is not musically motivated. One suspects an error of some kind, possibly a misunderstanding of the MS by the engraver. That at least has been the conclusion of all later editors. who beam these as a group of 6.

But A, B, and D, are relatively trivial.

The text at C, however, is highly interesting. Many editions have assumed an error or multiple errors in this measure and revise it to read so that it matches the music two measures later: 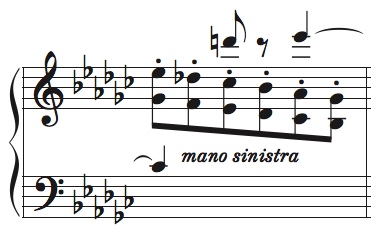 Donald Francis Tovey was so convinced of an error that in his edition he implies that anyone who understands what a fugue is couldn't possibly consider the text to be correct.

Schenker, however, who understood fugal style better than most, presents the text with one small change: the eighth note C flat in the bass is changed to a quarter note as in the the following measures. I believe that even this change is incorrect, and that the measure is engraved exactly as Beethoven intended. In fact, it is a masterpiece of ingenuity.

Beethoven feels that he must make a seamless transition from the single-note start of the subject B-flat D E-flat (ms.2-4 of the first example), to the double note continuation in ms. 5-9 etc. He does it by starting with a single note E-flat (m. 5 of the example) and introducing the lower sixths as an imitation of the fugue subject: E-flat E-flat- D flat C flat B-flat starting on the second eighth of m. 5. (See red lines in the example.) as if it were the continuation of the bass voice, For this reason the tied over bass note must be an eighth note, not a quarter note. Having now established the sound of the consecutive sixths in the listener's ears, he feels free to treat them as a single voice. This was one of the licenses he refers to at the beginning of the fugue where he writes:

"Fugue in three voices with some license".