During and after the time of Beethoven and Chopin, the standardization that we see today began to affect more and more aspects of music engraving practice. While much of this was positive, some was negative. In this series of posts, I am going to present illustrations of the practices of the past that have been lost, with a resulting loss of communication.

When the opening theme of the Menuetto of Beethoven’s Sonata op. 2 no. 1 returns to close the section, Beethoven distributes the notes between the staves in the “old” style with no concern about keeping right and left hand notes on different staves. This is because he has far more important things to communicate: 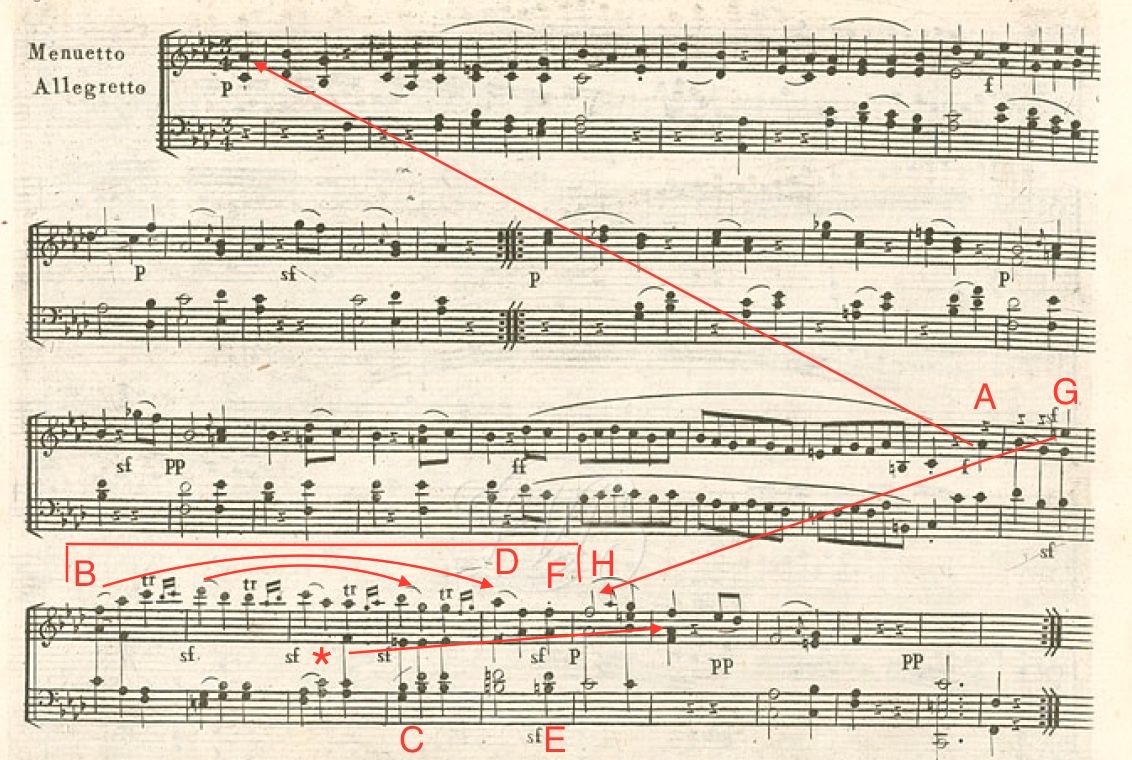 At letter A: By placing the upper left hand notes on the upper staff he makes a visual connection with the opening of the piece so that it is clear that he is overlaying another melody, played by the right hand, above the original ms. 1-2. See arrow starting at A.

At letter B: Starting here the upper melody has down stems in contradiction to our present rules. The engraving practice of that time did not follow these rules, often because of spacing concerns, as long as it didn’t interfere with reading. In this case, only the down-stemmed F that runs into the A flat in the left hand presented a slight reading difficulty. (The engraver should have offset the stem to counter this, but may not have really understood Beethoven’s notation in the now-lost MS.) But the question arises as to why Beethoven would have changed the stem direction immediately after the up-stemmed upbeat E natural at letter G. This question will be answered below.

At letter C: By placing the upper note of the left hand (E natural) on the upper staff Beethoven is able to slur the upper tones of the thirds in the lower voices as in the two previous measures. (The engraver drew this slur badly.) This encourages the player to bring these tones out from the chord. This wonderful notation has been lost in most later editions, including Schenker’s, which must place the slur under the chord because all the notes appear on the lower staff:

As well, by keeping this middle voice on the upper staff, (as shown by the arrow) it calls attention to the relationship of these notes to the opening upper staff notes of the piece.

At letter D: At this point Beethoven runs a palindrome of the upper voices at B. This is a clue as to purpose of the down-stemmed upper voice. Beethoven is setting off the area from B through F by means of its stem-direction, (bracketed in the example) as if it were a parenthetical phrase. And the phrase itself also resembles a kind of melodic and harmonic palindrome with the starred F minor measure as its center. (See curved arrows above in the example)

At letter E and F: The accentuation suddenly changes when the sf is moved to the third beat. This acts as a kind of right parenthesis to end the phrase and reminds us of the sf at point G! What follows is now up-stemmed as if continuing directly from G! In fact, the music even makes melodic and harmonic sense if we remove the parenthetical area and we play H directly after G as shown by the arrow.
Last edited by John Ruggero on 07 Jan 2020, 15:50, edited 1 time in total.
Mac mini (OS 10.8.5) with dual monitors, Kurzweil Mark 5 with M-Audio Midisport 2 x 2,
Finale 2014d with GPO 4, JW Plug-ins, SmartScore X Pro, Adobe InDesign CS4,
Inkscape .48.5 and .91, FontForge 20150526
http://www.cantilenapress.com
Top

Here is a diagram of the palindromes at multiple levels within the down-stemmed phrase:

Thank you very much, David. I greatly value your opinion and will certainly continue to hold forth on the old notational practices. There is so much to be learned.
Mac mini (OS 10.8.5) with dual monitors, Kurzweil Mark 5 with M-Audio Midisport 2 x 2,
Finale 2014d with GPO 4, JW Plug-ins, SmartScore X Pro, Adobe InDesign CS4,
Inkscape .48.5 and .91, FontForge 20150526
http://www.cantilenapress.com
Top

Is this 4 dots classic double repeat or play four times...?