As I edit Beethoven’s piano sonatas, I am constantly struck by many interesting details; so many, that it would be impossible to describe them all. But here is an example from the second movement of his Piano Sonata op. 78 that I thought worth sharing: 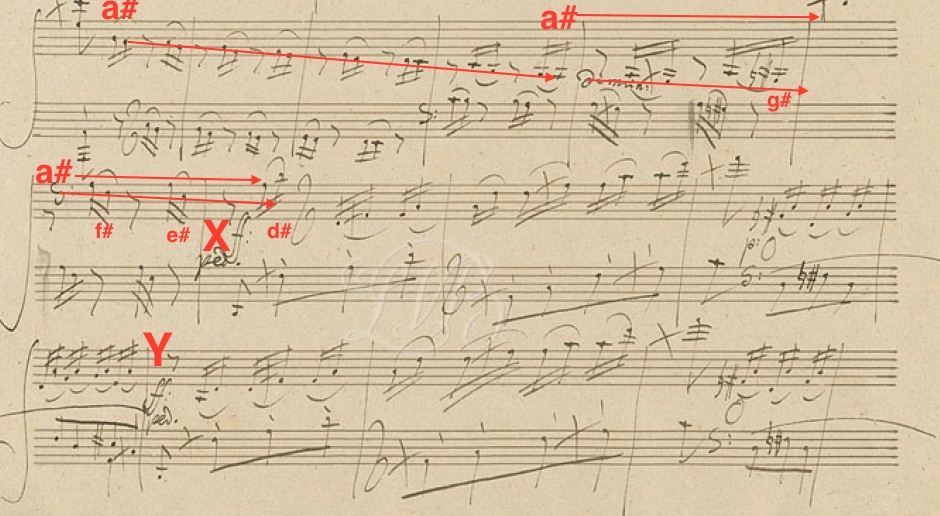 The passage at Y is an exact repeat of the passage at X, and all editions that I am familiar with, including Schenker’s engrave them both as at Y, the right hand entirely in the treble clef, since the ff clearly starts a new phrase in both cases.

Beethoven, on the other hand, was not at all concerned about making X and Y match, and placed the clef change at X in the middle of the measure. Why he did so illustrates his thought process.

The music before X has worked its way down an octave from A# to A# and then splits into two lines, one maintaining the A# and the other continuing down the scale to D#: A#-G##, A#-G#, A#-F#, A#-E# in descending sixteenth-note pairs. The arrival point is X, where after the ff explosion, he flips the expected final A#-D# sixteenth note pair from an descending to a ascending direction and continues on similarly up the D# triad.

Were the treble clef to have intervened between the two measures, we would be denied this visual insight into the inner connection between the two passages. Unfortunately, this is exactly what happened in the first edition and a wonderful notation was lost from the beginning.

Good catch. Beethoven's version does make it a bit easier to play.
Top

Thanks, ttw. That's my experience also. Understanding more fully what you are playing often makes it easier to play. The body responds better.

This interesting question can only be unraveled fully through a complex chain of reasoning that deals with all of the clef changes and direction of the stems, so bear with me:

Thus he keeps the left hand on the lower staff by changing to the treble clef in m. 1 but back to the bass clef in m. 4 as soon as he can to avoid unnecessary ledger lines. See no. 2 below:

2. Beethoven did not like to use more than two ledger line notes below in the treble clef or two ledger line notes above the bass clef. Thus he changes to bass clef in the right hand in m. 6 to avoid low ledger lines in the treble clef. He doesn't change clef as early as m. 4 or 5 despite the ledger lines because he doesn't want to disrupt the A# to A# octave line in the right hand, especially since the clef change in the left hand is disruptive.

3. In this passage (and also the corresponding one later) he uses the unusual down stems in both hands to show that the A#-A#-D# melodic line is an inner voice in relationship to the music around it. If he had continued the left hand in the treble clef in the ms. 4-6, this would produce the awkward combination of many low ledger lines with down stems. So changing back to the bass clef at m. 4 allows him to continue the down stemming in the left hand to compensate for the up stems in the right hand, which are forced by the very low notes.