This question is not directly related to notation, per se, but, hoping this indecent slight would be overlooked, I'd be grateful if someone could clarify this for me.

In a traditional symphonic orchestra, how are the WW/Brass chairs set up if you have multiple player for one instrument?

With the woodwind it's less variable (excluding pits). Nearly always two rows for double or triple WW. Again from the conductor's view, it goes like this. First flute to the left of first oboe, with first clarinet behind first flute and first bassoon behind first oboe. The second and third players are progressively further from the centre.

Awesome, thanks David. Secretly, I hoped you'd jump in and share your five cents.

How are the lines numbered? Do we count from left to right (i.e. firsts always on the left, then 2, 3, etc.) or from right to left? 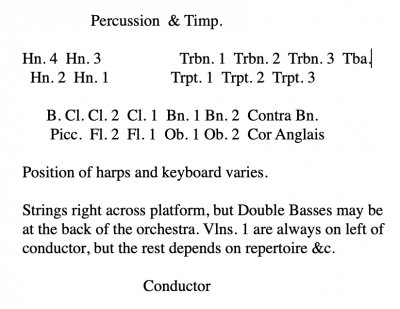 I'll add that Covid social distancing and all that can alter the orchestra layout somewhat. However, I've just watched a live-streamed operatic concert from the Royal Opera House, Covent Garden in which a full orchestra of 67 (there was even a contrabass trombone) were spread right across where the stalls seats are usually placed plus the pit, with members of the chorus in individual boxes and the solo singers suitably distanced from one another on the main stage. Something close to the orchestra layout I showed above was maintained, however weirdly spread out. If you don't mind paying £16 (necessary and welcome support for those involved) you should be able to watch it on demand at https://stream.roh.org.uk/packages/the- ... in-concert until 8 October. It really was wonderful to hear and see this, despite all the restrictions.
Finale 25.5 & F 26.2.2
Mac OS 10.13.6 & 10.14.6
http://www.composers-uk.com/davidward/news.htm
Top
Post Reply
5 posts • Page 1 of 1