Notating a piece for narrator & one instrument

Notating a piece for narrator & one instrument

I wonder what members of the forum think of my way of notating this five minute piece for narrator with basset horn? (There is only one more page of the whole thing.)

This slightly unusual project came about after clarinettist Sarah Watts contacted various composers asking if they could contribute a short piece about a dog for narrator and basset horn in aid of an animal charity. It's not a commission in the usual sense, but it's good to have something active during ongoing Covid lockdown. It has just been recorded in the last few days and is now on YouTube https://www.youtube.com/watch?v=QSmps9E ... e=youtu.be narrated by Jon Iles with Sarah Watts on basset horn. I was rather jumping in at the deep end writing a piece for remote recording with no live rehearsal. If I’d known in advance how Jon was going to do the narration, it's possible I might have paced things differently; but this is what I wrote.

Anyway, my question on this forum is about its notation. Was this a clear enough way of doing it? What is shown is the score doubling as Sarah's part. She seemed fine with it. Jon (narrator) does not read music. 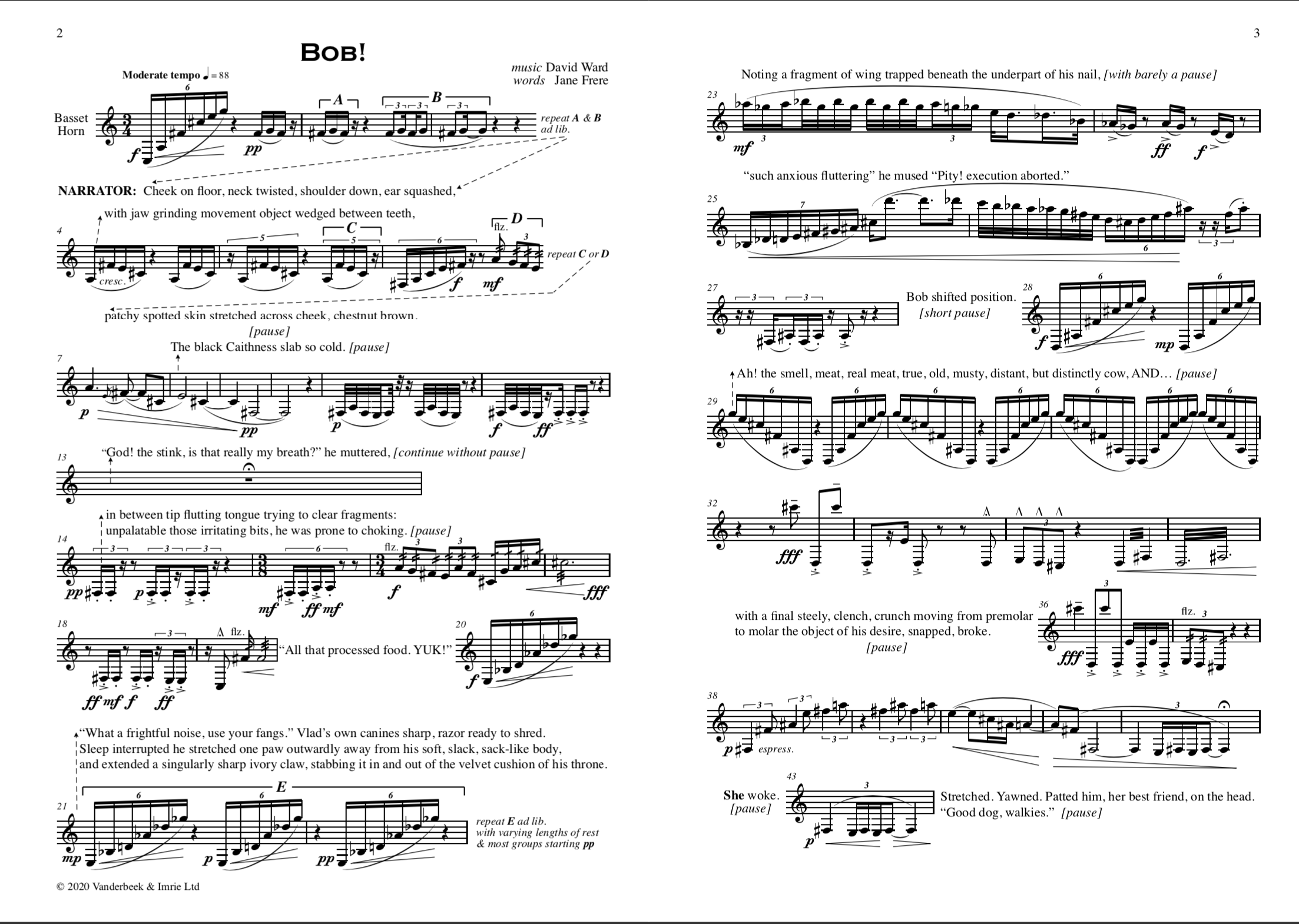 To me it looks enough clear, but I would suggest some ideas for clarification.
I would:
- notate it exactly as it would be notated with two instruments. It means that there should be a continuous staff throughout the piece, with clear "muta in" type of information. I have difficulty understanding the arrows. If some parts will be performed simultaneously playing+talking, it should be clearly stated, or notated in two staves.
- remove the "Basset Horn" instrument next to staff and put above (as Finale does by default) as "Basset Horn / Narrator" or similar to it, and add "One Player".
- add boxed repetitions and arrow with the text such as "repeat A or B ad lib". Now It is not exactly clear if the player would mix these with the text. Or if it is played one after another, or if it is mixed play-talk-play-talk. Therefore some ideas (not fine tuned):

My most extended foray into melodrama (in its meaning of speech accompanied by music) was a 15 minute section in my first opera, written in the 1960s, which included parts for two non-singing actors. Here I did write the spoken parts on their own staves as OCTO suggests above. Some barlines were deliberately absent from the speech staves (while present in the orchestra), indicating that the particular phrase shown must be spoken to fit between those barlines that were present. With adequate rehearsal and a very competent conductor who knew just how to help the actors, it worked as intended. If anyone is interested, this is how the 15 minute melodrama section was recorded in 1980 https://www.dropbox.com/s/jyc7swusqtdqb ... a.mp3?dl=0 It starts rather abruptly in the absence of what precedes it on the full recording.

The problem with which I was faced, as a result of Covid lockdown, in the short piece for narrator and basset horn was a total absence of live rehearsal. The narrator, Jon Iles, and the basset horn player, Sarah Watts, recorded themselves in different locations. I think things went like this, but I don't know exactly how it was done. The narration was recorded first, after remote discussion and trial and error between the two performers. Then Sarah fitted her playing as best she could to the recorded narration, followed by all the editing, blending and balancing being done by Sarah for the final recording. Given that Jon Iles is in Plymouth (SW England), Sarah Watts is in Nottingham (East Midlands of England), Jane Frere, writer of the words, is by Loch Ness (NW Highlands of Scotland) and I am in rural NE Scotland, it wasn't quite like an ordinary first performance/recording!

Just for completeness here's a scan of a tiny bit of the melodrama in my 1960s piece mentioned above, which illustrates how I notated that (not sure why I used all those unnecessary naturals, although it wasn't that unusual at the time). It occurs soon after 10 mins 55 secs into the clip linked above.

I think I abandoned that way of notating ties not long after, but in one's 20s one tries this and that with irresponsible abandon, plus a plethora of changing ‘certainties’. Oh what it was to be young! 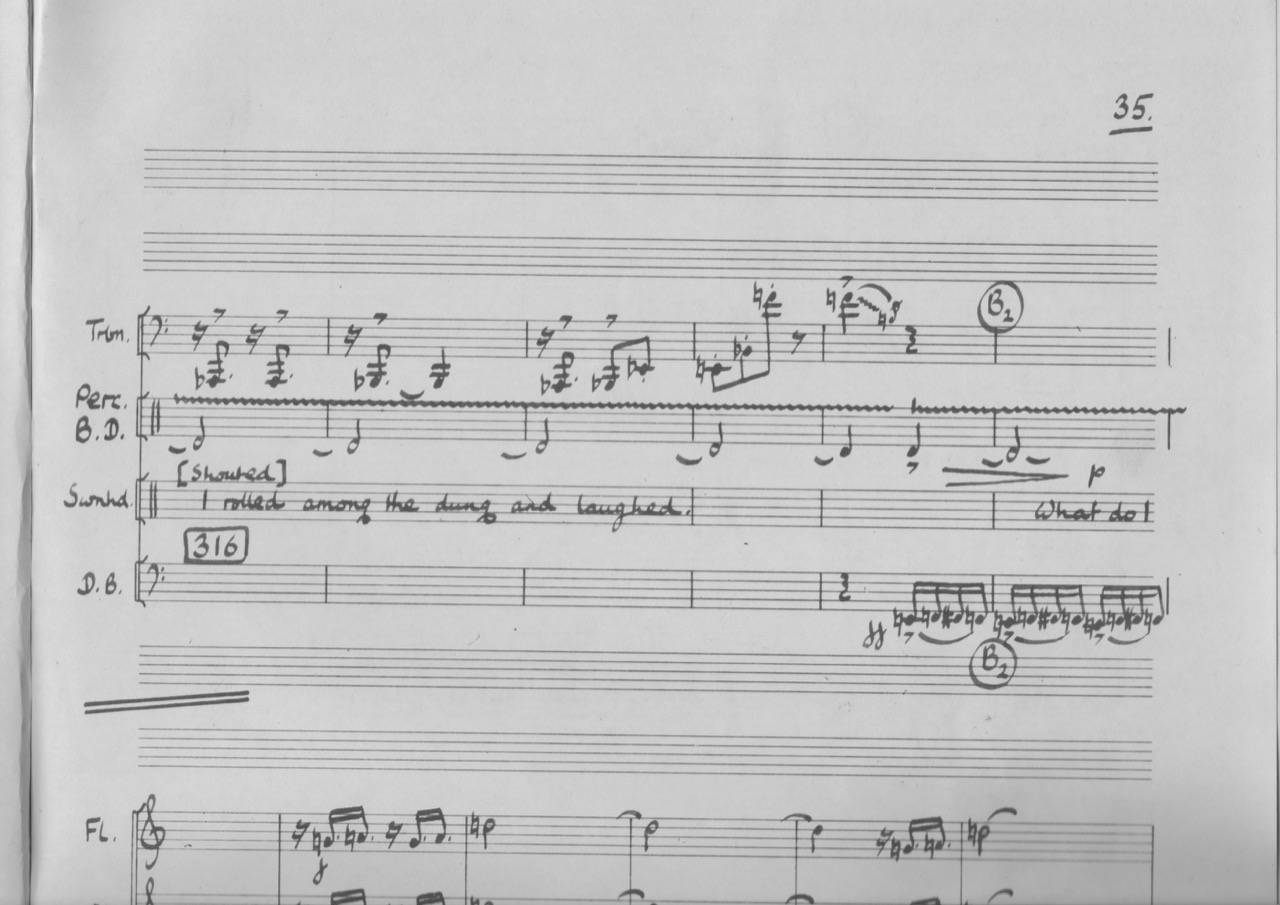