Mystery of the Pedal Marks in the Moonlight Sonata

Mystery of the Pedal Marks in the Moonlight Sonata

Beethoven’s experiments with pedal effects in his published sonatas started with op. 26, where the pedal is used to depict a drum roll and a fade-out ending. Not having a precedent, he was forced to invent a new notation for prolonged use of the sustaining pedal. Being the practical musician he was, he continued the tradition of Italian markings. So he wrote senza sordino (without dampers) to show where pedal was to be depressed to lift all the dampers off the strings, canceled by con sordino to indicate the normal state with the dampers resting on the strings. This worked well enough for single isolated special effects such as in the drum roll from op. 26:

He used the same notation in the last movement of the op. 27 no. 2, a sonata that seems to be all about the sustaining pedal. The first movement used continuous sustaining pedal throughout, possibly the first piano piece to do so. At the beginning of this movement he simply states in Italian that the whole piece is to be played senza sordini.

In the third movement, he used the sustaining pedal to mark the explosive pair of chords that recur throughout the opening theme: 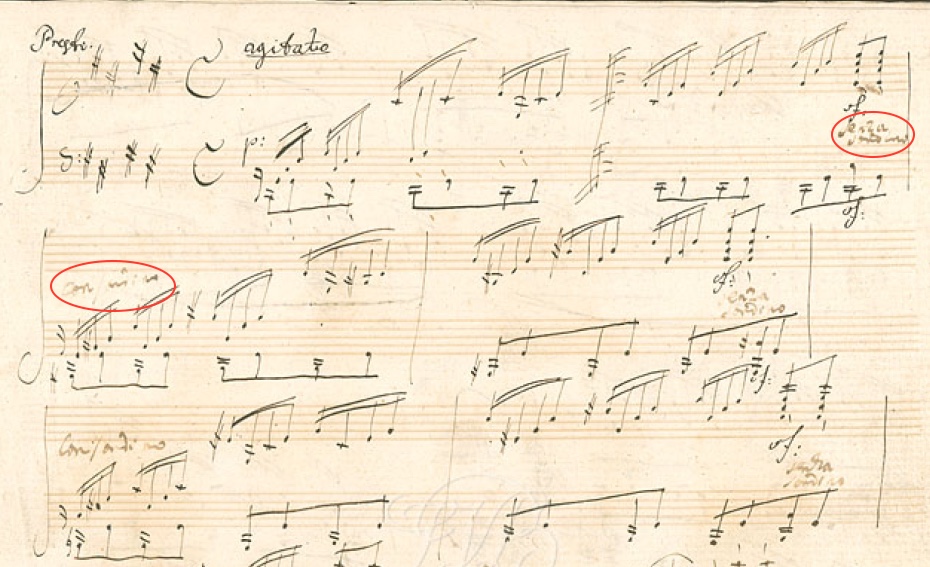 As seen, he wrote in senza sordino under the two final chords, and then con sordino at the beginning of the next measure. This worked best since there was no room to place both markings within a single measure. Judging from the ink and evident haste in writing them, he seems to have inserted the no less than 18 pairs of pedal marks for these final chords sometime after writing the rest of the manuscript.

It is at the last of these pairs, m. 163 a problem arises that has long been a subject of debate: 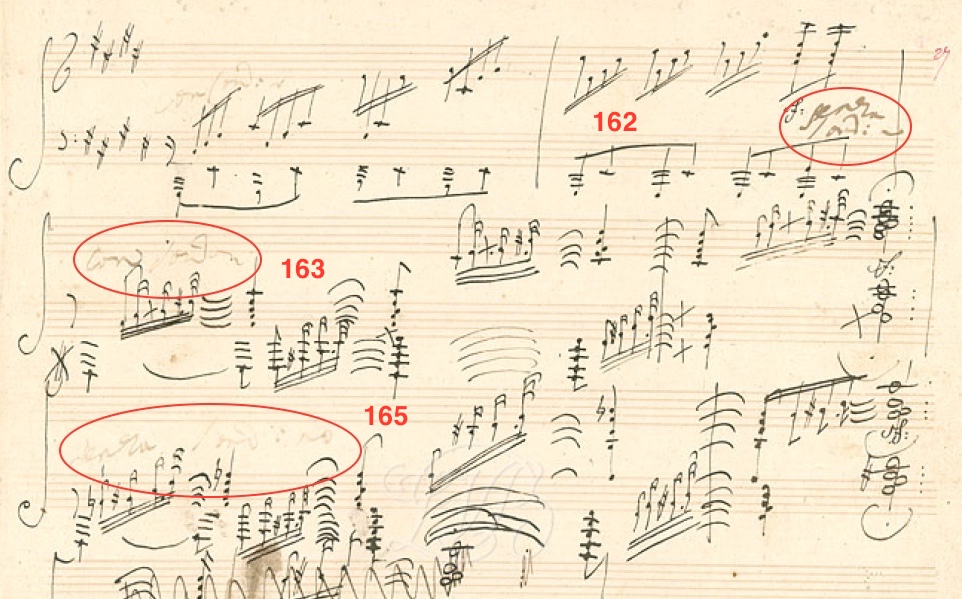 MS. 163-164 and 165-166 are two pairs of similar measures, both written-out hand-over-hand broken diminished seventh chords. The second pair is marked as one would expect, senza sordino followed by a con sordino in the next measure, (see ex 4) that is, the pedal is to hold through the entire two measures. But m. 163 is marked con sordino as if ms. 163-164 are to be played without the sustaining pedal. How can this be?

Most editions and pianists ignore this strange con sordino and use the sustaining pedal for both sets of measures. And this is undoubtedly what should happen. Despite the fact that the rolled chords are laboriously written-out (to be sure that they are held through by hand), the first bass note in each pair must be held through both measures to create the thunderous effect clearly intended. Leaving the final held chords high and “dry” would be totally counter-productive, As well, the holding these low bass notes for two measures makes them match their continuation at the next explosion in ms. 177-190 etc.:

Yet the issue of the pesky con sordino in m. 163 remains. How could Beethoven have made such a blunder? I offer here an explanation that I have not encounted in discussions of this issue..

What happened next is complete conjecture, Maybe he thought that showing what he wanted in ms. 165-166 would suffice for 163-164. Who would play them differently? Maybe he just left it up to the publisher. This was always fraught with peril and this time was not different. They did the worst thing they could do by removing the one correct senza sordino in m. 165 and leaving the following con sordino in m. 167 stranded: