The Nota Bene in Beethoven's op. 90

The Nota Bene in Beethoven's op. 90

by John Ruggero
At the end of the second movement of his Piano Sonata op. 57, Beethoven wrote secco under the top staff and arpeggio under the lower staff to mean that the omission of the arpeggio sign for the right hand chord was no mistake and that the upper chord should not be rolled:

Despite this warning, the passage was engraved as follows in the first edition and in many later editions (although modern editions have followed Beethoven's manuscript). Note the forlorn and now meaningless arpeggio still remaining in the lower staff: 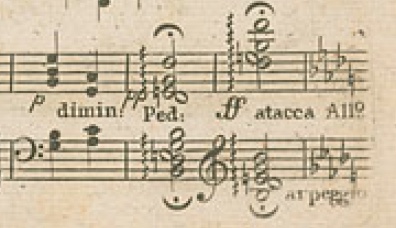 Clearly, Beethoven did not always have luck in communicating his ideas to his publishers. In the following case from the first movement of his Piano Sonata op. 90, this bad luck even extended to the many editors who followed, including modern ones, although he gave an explicit warning not to change what he had written.

Here is the relevant passage in the exposition from the first edition:

And here is the corresponding passage in the recapitulation that has caused controversy:

As we see from these last two examples, Beethoven makes several changes to the ending of the passage. What was an explosive moment of despair in the exposition has been transformed into a poetic cry by means of new dynamic scheme and reducing the right hand to a single note and octaves instead of full chords. I think that this was a response to the shrillness that five-note chords would have caused in the higher register. 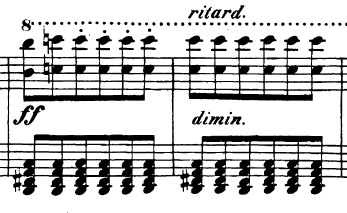 Many slurred the first two notes that he had specifically marked as staccato in the MS, both here and in the exposition. Here is the Casella edition:

The slur clouds the relationship between these first two chords and the previously separated pairs chords from which they are derived.

And the von Bulow edition even suggested adding the missing chord tones to the first chord.

Aside from a wish to make the measures match, the evident disquiet over the measure with the lone B indicates that all of these editors felt that there something wrong. And they were right: even the first edition was in error.

What Beethoven wrote is totally unexpected and looks wrong musically and pianistically:

Yet how carefully he writes it, leaving room after the B to make it clear that it is not under the octave sign. And to cap it off, he pencils in NB, “note well what I have written”, because he knew how strange this measure looked and how editors might react. Unfortunately, this did not stop the engraver from positioning the octave sign over the B. (See the fourth example above.)

But when one actually plays what Beethoven wrote in context, as wrong as it looks, it sounds right. It is better than the version printed in the first edition and all of the improvements by later editors, both acoustically and pianistically. Beethoven was guided by his ears in making his decision, which was apparently not an easy one judging from the evidence of some sort of modification in the manuscript.

To understand why it sounds better requires analysis.

by benwiggy
Just once again, to say how much I love your extraordinary insight.

by John Ruggero
Thank you very much for your compliment, Ben.

by John Ruggero
Thanks for your interest, Harpsichordmaker. I'm working on it.
All times are UTC
Page 1 of 1