Composers vs Engravers: slurs and ties

Composers vs Engravers: slurs and ties

This thread recaps and continues a subject that just arose on the MakeMusic Forum: See http://forum.makemusic.com/default.aspx?f=5&m=467755)

Elaine Gould has, as usual, a flexible approach to slurs in combination with tied notes, and allows the slur to not encompass all the tied notes if there are many of them.

However, there was a time in music engraving when there was greater flexibility, and slurs could begin on the last tied note, or end on the first tied note. This flexibility allowed engravers to present exactly what composers were writing in their scores.

The following is an autograph that shows the great variety of slurring used by Beethoven. At times long slurs encompass tied groups; at other times they end and then depart from a pair of tied notes. At other times slurs are even warped, either because Beethoven changed his mind about the slurring in mid-flight or because his mind and hand were subconsciously preferring a kind of nested slurring, since the suspensions were demanding there own slurs, as at the bottom of the page.

We also see Beethoven's rather attractive and clear calligraphy and notation, contrary to the general impression. Here is the musical handwriting of someone incredibly fluent with musical notation so that it flows out of him as if he were actually playing the piece. Note also the rather spacious presentation very typical of Beethoven, probably to give himself plenty of room for corrections and to make things clear to his copyist, who often had his hands full. 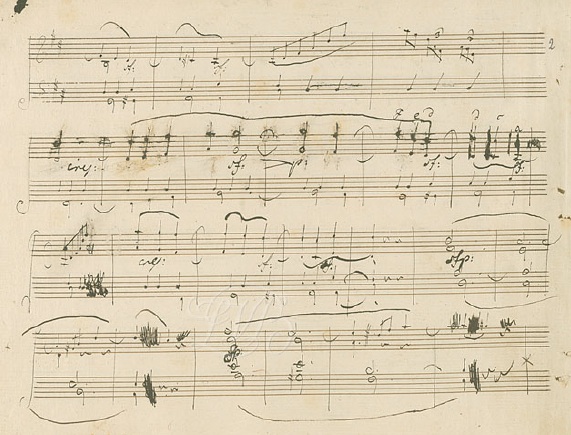 Unfortunately, Beethoven's slurring has been destroyed by editors and engravers since his lifetime. Even some of the best current Urtext editions "modernize" the slurring, sometimes without comment. Here is a first edition (the autograph is lost) that is probably close to the composer's intention, since, at that time, engravers tended to follow autographs closely: 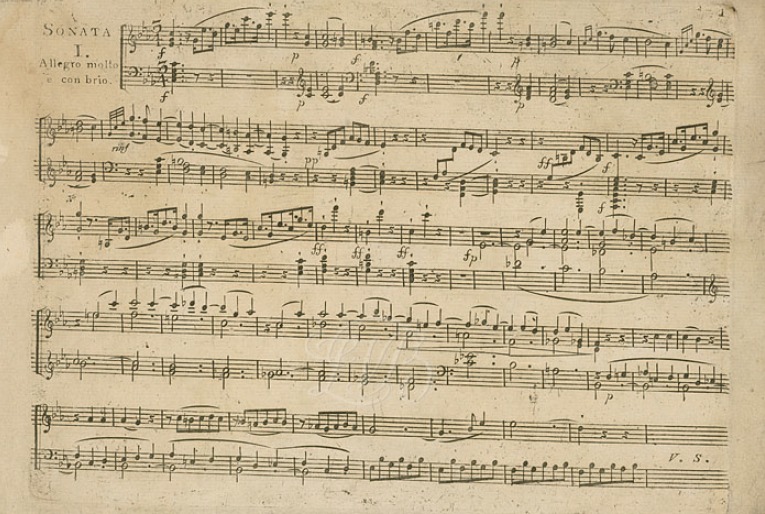 Note again the use of smaller slurred groups (particularly starting at the end of the third line), as if the slurs represented bowing, and giving variety to the articulation and lightness to the music. Here is the same page in an example page from a current Urtext edition, with Beethoven's ignored and replaced by long slurs to conform to "contemporary engraving practice".

Re: Composers vs Engravers: slurs and ties

I would agree that if slurs are to long, they could be broken on a tie. Perhaps, "molto legato" could be used as well.
But I also see your strong point in even shorter slurs, in your example particularly the first and third row in op10. = it emphasis the phrase, and if it was written in the modern sluring rule, that emphasis would be obscured.

It would be interesting what impact would it have if the autograph has been respected in a new, future edition.
Freelance Composer. Self-Publisher.
Finale 25.5 • Sibelius 2019 • MuseScore 2+3 • Logic Pro X • Ableton Live 10 • Digital Performer 9 /// MacOS Mojave, (side system: Fedora 32, Windows 10)
Top

Re: Composers vs Engravers: slurs and ties

OCTO. Beethoven's slurring is retained in the new Wiener Urtext Edition. This is one reason why I generally prefer this edition over Henle for the works of most composers:

It also appears to be respected in the new Alfred edition. However, Alfred does this thing that so many otherwise good editions do:

If the musical phrase begins with a pair of tied notes, (which, in Beethoven, is often syncopated, as in the op. 10 no. 1 example above starting on the 2nd measure of the 2nd line and then later on the page) the slur often starts on the SECOND note of the pair in classical autographs and first editions.

But this is modernized to start on the first note of the pair. This apparently "harmless" change is actually quite harmful, for the following reason: syncopations of this type in classic style music need a kind of light spring or bounce to them which is produced in piano playing by what I term an "up-accent", that is, the arm is actually pushed upward by the fingers as they somewhat explosively produce the tones. If the first note is included in the slur, the tendency of most players will be to produce the accent with a downward push of the whole arm, giving a much heavier effect, as if the first note were a true accented downbeat. All of this by the simple moving of a slur!

Beethoven's slurring is given exactly in the Schenker, and "respected" (that is, they unfortunately do the thing I just described, but are otherwise correct) in the old Beethoven Complete and the Lebert-Bülow editions: