Engravers vs Composers: Slurs of Genius

Engravers vs Composers: Slurs of Genius

The following excerpt is from the second movement of Beethoven's Sonata op. 27 no. 2 ("Moonlight").
A unique S-shaped slur occurs in the left hand of the first measure in the example:

Why? Lack of room above the third beat? Or something else? 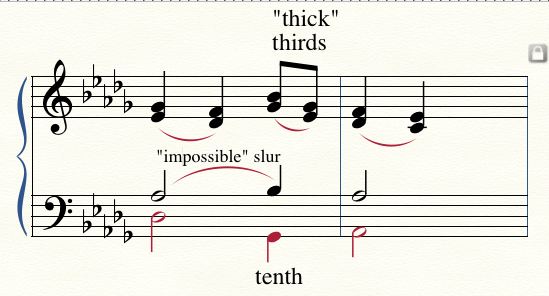 But this presents technical problems. The Bb in the tenor forms a tenth with the bass, which would have to be broken by most players or played by the right hand. The Gb and Eb eighth notes in the alto form thirds with the soprano that sound thick on their own, create a shrill piano voicing overall, and are slightly awkward to articulate and play fluently because of the repetition of the Gb between the two voices.

Beethoven solves these problems by swapping tenor and alto tones between the hands, which necessitates moving the alto down an octave. This also creates a warmer voicing for a very expressive moment in the piece. To show that the notes on beat three of the lower staff are really alto voice notes, Beethoven uses the slur to visually throw those note upward into the upper staff!

Here is the first edition. Already a slur of genius has been destroyed by the engraver: 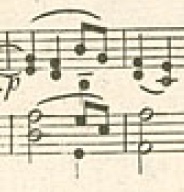 The right hand slur is contested in various editions.

Is it one as in the first edition? Two joined slurs as in the autograph? Two slurs that join by a slip of the pen as in the Schenker edition? Or is it some kind of correction by Beethoven?

My theory: Beethoven is writing in his "string quartet" style for the piano in which the tenor voice would be supplying the legato sustain, the bass the tenuto support, and the soprano and alto the more articulated voices slurring pairs of tones. (This refers to the voices as shown in the analysis.)

Because the tenor voice cannot actually supply a perfectly nuanced sustain between the required tones Ab and Bb, Beethoven's instinct was to supply a little help in the right hand to connect to both the "tenor" and soprano Bb's by means of the three-note slur. Yet, he ALSO wanted a break between the F and Bb in the soprano. To notate this is almost impossible, but the impossible never stopped Beethoven! I think that this is another case where the composer's notation should be left as it stands.
Last edited by John Ruggero on 13 Jan 2016, 14:42, edited 1 time in total.
Mac mini (OS 10.8.5) with dual monitors, Kurzweil Mark 5 with M-Audio Midisport 2 x 2,
Finale 2014d with GPO 4, JW Plug-ins, SmartScore X Pro, Adobe InDesign CS4,
Inkscape .48.5 and .91, FontForge 20150526
http://www.cantilenapress.com
Top

Being a novice at the piano, I'm not going to contest anything in your last post.

I do think, however, that this is a good example of the legitimacy of different editions for different purposes. While your argument as to Beethoven's intentions makes sense, his original slurring does not make the voice leading immediately clear to me at all. As a casual player, I would certainly prefer the edited version, even if it does not reflect his entire thought process. On the other hand, for a more in-depth study of the work, which has to be the main purpose of an urtext edition, I do not see the need to edit the original slurring, certainly not without a footnote reflecting the original.
Top

The only edition at IMSLP that presents the lower slurs accurately is the Schenker edition, which is very widely used in the US as reprinted by Dover. I no problems in this slur for a casual player. But I agree that it certainly deserves explanation. 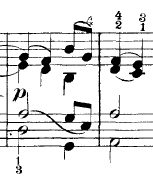 It is curious that Schenker doesn't comment on the lower slur, since he had such a strong interest in this kind of notation. In "Der Frei Satz" he has a short graphic analysis of of this movement and graphs the tenor voice on the third beat up an octave, so he might have agreed with my presentation of the voice-leading, if not of the slur itself.

As far as the upper slurs, I agree that an explanation is owed the player, but again see no problem for any player were it presented as in the autograph.

Schenker made his own editorial decision about the upper slurs, but without explanation. However, he did publish a facsimile edition of this sonata with commentary and mentions that it is unclear whether one or two slurs is meant in the upper staff. All the editions at IMSLP have made the slurs into one long slur without comment.

I can't access my collection of modern editions of the Beethoven Sonatas at the moment but would hope that at least some adhere to the original notation. The Henle edition presents the upper slurs accurately, but without comment. It does not present the lower slur as in the autograph.

After posting this, I realize that I should have pointed out that if the LH S-shaped slur represents two slurs joined, it is exactly like the RH slur! The two "sets" of slurs actually are working together. I find this a very convincing argument for accepting the RH slurs as no "mistake" and engraving this measure as it stands.
Mac mini (OS 10.8.5) with dual monitors, Kurzweil Mark 5 with M-Audio Midisport 2 x 2,
Finale 2014d with GPO 4, JW Plug-ins, SmartScore X Pro, Adobe InDesign CS4,
Inkscape .48.5 and .91, FontForge 20150526
http://www.cantilenapress.com
Top
Post Reply
4 posts • Page 1 of 1