In a recent post from the thread "Composers vs Engravers: Stem direction 2", MJCube wrote:


Do engravings which ignore Beethoven’s stem directions in favor of rules tend to make these passages convey any different impression of line? If we can determine any real difference in how one would play it, then maybe there’s a case to be made for reproducing some or all of the non-standard stem directions as written.

Here is a proposed test to see if there a meaningful difference: five versions of Beethoven's run from the Violin Sonata op. 24. The reader can decide if the notation would influence their performance. Responses would be welcome. 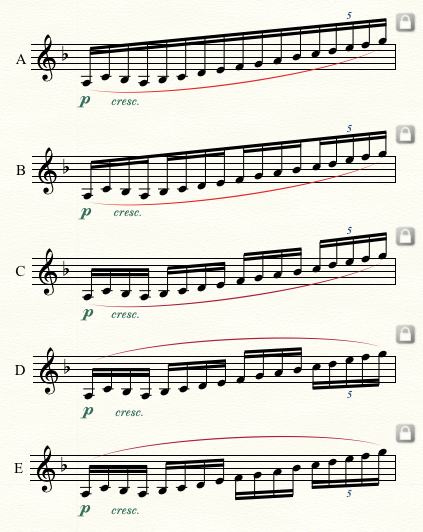 And here is another revision of the test which includes the following measure: 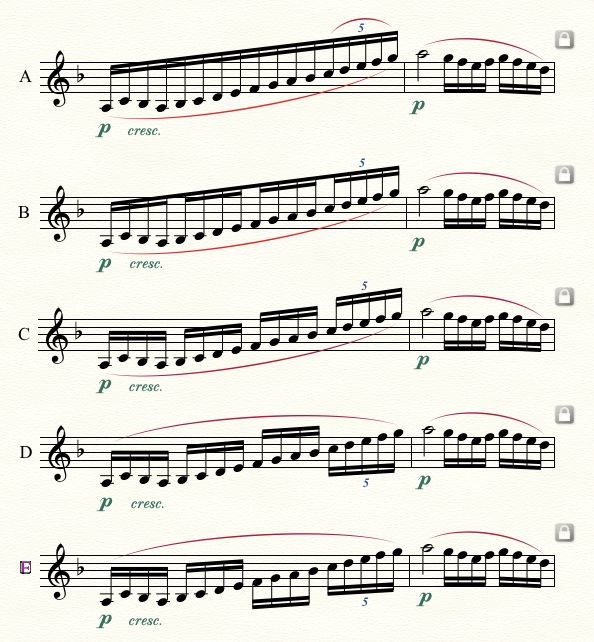 My pure visual experience tells me this:
I like C, but why is slur above?
A - unaccepted.
Somehow E is fine as well.
The currently correct one is D.
I vote for C, but some tweaking with the slur and beams:

I think that the tendency in hand copying to keep stem direction constant does not negate at all the fact that it is also better for continuity if stem direction does not change in the middle of phrases. The two are a happy marriage. And the stem directions of the autograph are observed in the early printed edition in which there is no similar advantage for engraving that I am aware of.

I vote for D, at least without any context. I would, and would expect others to, execute C and D in exactly the same way, though.

Both A and B are just plain wrong. E is a failed attempt at making the line more symmetrical, in my opinion.
Top

John Ruggero wrote:Thanks, Knut. But I am interested in why you feel that A and B are completely wrong.

Because you'd never beam every 16th note in a 4/4 measure.
As for B, this kind of beaming is used to separate subdivisions or divisions of an 8th or smaller. You could perhaps argue that it would be OK to use an unbroken primary beam between 1 and 2 or 3 and 4, but never between 2 and 3 in 4/4.
Top

I agree with Knut; however, particularly in older baroque manuscripts one can find out numerous examples of that kind of beaming. Here is lacking the clear beat "mapping".

John is correct that in this example the opposite stems would visually break the phrase, but I want to add that because of the modern notational rules musicians use to see the CURRENT CORRECT "stemming" - ex.D, and therefore it would be understood as phrasing continuity - without doubt, equally powerful as ex.C.

For me, the beauty is in ex.C - which I could accept, but the currently correct one is ex.D

OCTO wrote:I agree with Knut; however, particularly in older baroque manuscripts one can find out numerous examples of that kind of beaming. Here is lacking the clear beat "mapping"

Knut, while I would agree you and OCTO. (and also with Arnstein) that such "rules" clarify orchestral parts, I would not hold to them for other kinds of music. E. Gould discusses "Beaming to the Meter" and remarks that scale passages can "remain undivided" to show the lack of internal stresses, but she seems to be referring only to secondary beam breaks. But I could find no discussion in her book of NOT beaming to the meter.

If there is no such discussion, then this is quite an omission, because as a pianist, I constantly see such beaming patterns, including great numbers of notes in regular and irregular patterns with or without secondary beam breaks. Here are some examples from Bach's Partita no. 4 and Liszt's Hungarian Rhapsody no. 15 which have regular subdivisions of the beat. In each case, I think that the composer is asking for no internal stress within the run, just as it would appear intuitively. Now the question is: did the composer do this because it was easier to write, or because he was trying to get a point across?

Ex. 1 the 16 32nds divide a half measure in 4/4 with no beam break to clarify the fourth beat
Ex. 2 the piece is in 9/8 which is one more 1/8th than 4/4
Ex. 3 the 16ths divide the 4/4 regularly, and this first edition beams them over two measures!
Ex. 4 the same in a later edition, which "modernizes" the notation and uses beam breaks as in Style B in my test 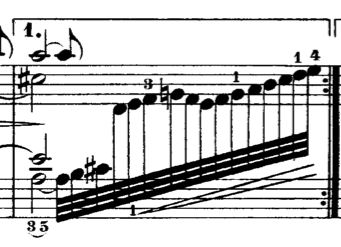 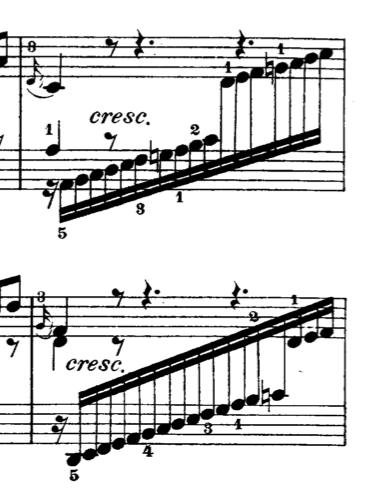 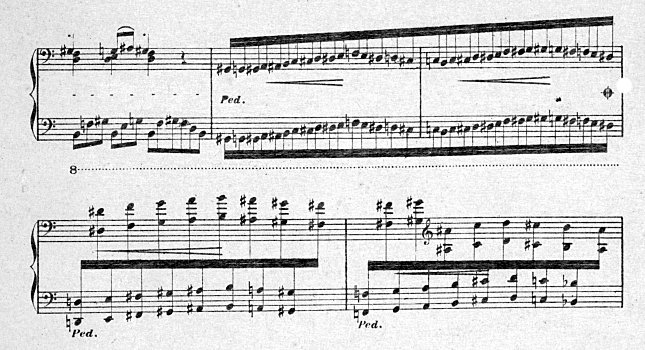 Wow! Let me first say, this quite the glaring oversight on my part. I'm embarrassed!

That said, none of the examples you've posted are slurred, so it goes without saying that the beaming is central to indicating the phrasing. In the Beethoven example, the slur renders the continuous beaming superfluous.

I don't really get why the secondary beam isn't broken across the first barline in ex. 4, though.

Edit: Regarding version A, even if you remove the slur and retain the continuous beaming, I would break the secondary beam between beats 3 and 4 because of the quintuplet. The current beaming makes the rhythm very unclear.
Last edited by Knut on 23 Jan 2016, 18:21, edited 1 time in total.
Top
Post Reply
24 posts