Excellent counterexamples! This forum is becoming a great supplement to my education.

My eye prefers D as the clearest. I note that the standard stem directions allow me to peripherally observe the rhythm while my eye focuses on the noteheads melodically, just as well as stems all in the same direction. Nonstandard stemming or beaming simply draws attention to itself, and makes me think about what it’s trying to convey – which is of course the point of using it.

But I still feel that John is way out ahead of us in perceiving subtleties of execution or interpretation implied by nonstandard notation. John, do you think that fine pianists generally learn this sort of finer information as part of their craft? (If so, it would be nice to share the wealth of subtlety with other musicians, though I don’t have my hopes up for this to become really widespread.)
Top

John - very interesting!! I must confess that I have seen this before but I have pushed it away from my memor.

Knut, I was sure that someone would spot the the weirdness over the bar line in example 4! Since it is from an edited edition (Peters), I would not take it very seriously and assume that it is an error. The new Liszt Complete Works edition (Baerentreiter—Editio Musica Busapest) has the notation similarly but does break normally at the bar line. But to add such secondary beam breaks in a critical edition?

I agree with everyone that a modern performer is so accustomed to Style D that they would probably not be thrown into an outlandishly bad interpretation by it. However, I maintain my initial point: many performers will not give the last note of the run, the G, significance, particularly the pianists, and isolate and (c)rush the quintuplet into the next note. For me, Style A does the best job countering that, Style B next, then Style C. Style D does nothing to stop it, and may even promote it. Since A was archaic in this kind of situation and B was unknown to Beethoven, he settled on C; or his hand and heart settled on C. At the very least, he did nothing to counter the natural tendency to want to continue the stem direction through the passage.

MJCube, thank you for the compliment, but I think that this forum is blessed with some of the most notationally sensitive musicians around, and that is what makes discussing these matters so interesting. (Thanks, OCTO., the visionary!)

In my experience, I haven't noticed that pianists are any different from other musicians in perceiving notational subtleties. I think that most performing musicians take in notation very intuitively after their many years of interacting with it and register little of it consciously. I would say that engravers are probably much more conscious of notation but often interact with it in a purely visual way. I would say that musicologists and music analysts (Horrors!) are probably the most tuned in.

I have strong interest in the practical application of Schenker's ideas (another Horrors!) in performance, which is actually what Schenker was all about. Schenker was really the first to value musical autographs as guides to musical interpretation and not simply material musicologists used in making critical and urtext editions, and probably most who continue this interest have a Schenkerian background.
Last edited by John Ruggero on 24 Jan 2016, 00:27, edited 1 time in total.
Mac mini (OS 10.8.5) with dual monitors, Kurzweil Mark 5 with M-Audio Midisport 2 x 2,
Finale 2014d with GPO 4, JW Plug-ins, SmartScore X Pro, Adobe InDesign CS4,
Inkscape .48.5 and .91, FontForge 20150526
http://www.cantilenapress.com
Top

I'm curious why you think there might be a difference in execution between A and C when both of them are slurred.
Top

I should have also shown in the test that the cresc. leads to a sub. P in the next measure. This is also designed by Beethoven to cause the performer give enough tone to the G and articulate the A that follows.


I'm curious why you think there might be a difference in execution between A and C when both of them are slurred.

The additional force of the beaming in A conveys that there should be no internal accentuation, which means more than just legato. But that assumes that that is actually what Beethoven wanted. The following is an explanation of why I think he didn't want internal accentuation:

As I mentioned, this run was designed to get Beethoven over an awkward place: he had two F chords back-to-back and needed something amorphous to connect. The first 4 16th notes end the piano melody on an F harmony. The notes that follow are a amorphous C7 to lead back to the F harmony in the next measure. It's amorphous because the bass of the chord is absent and only understood from the context.

In the following chart you can see how the run is really two stacked C7s occupying three beats. The outside notes, the bottom Bb and the top G are the important notes. Beethoven positions the low Bb to stand out by placing it on the beat, because this is an active note that needs to resolve to the A in the next measure. The high G is brought out by the cresc. and the fact that it is the last and highest note. Everything in between is only filling in, as if the run were simply an arpeggiated chord. The C's in particular should not stand out because they are simply doubling the root and have no importance on their own. 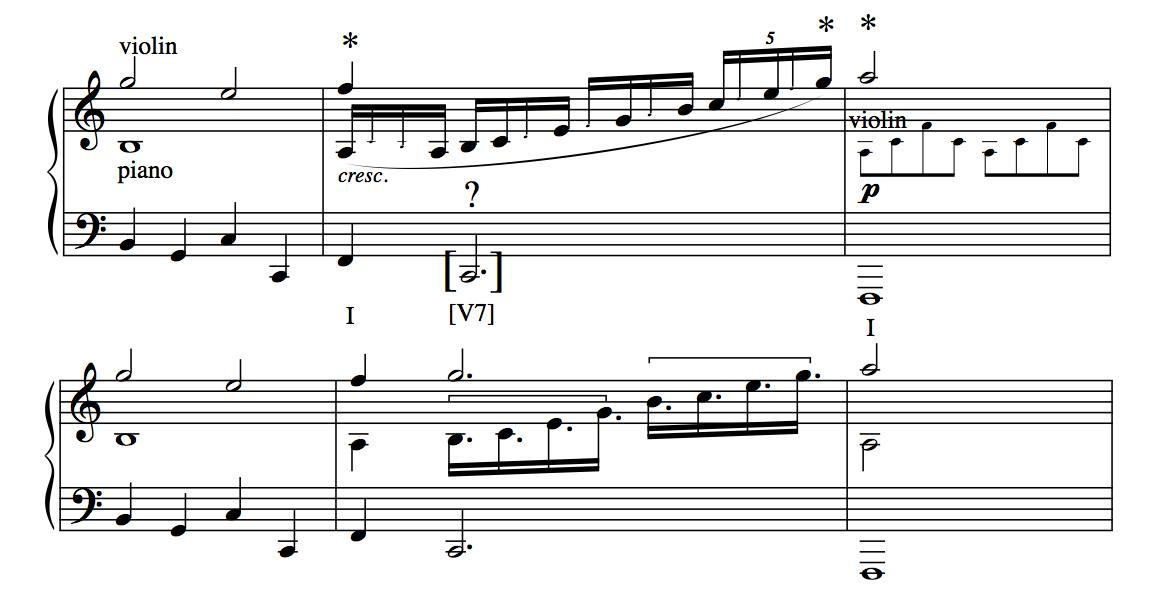 I don’t feel a V chord on beat 2 where you have written it. That bar is all I (‘one’) to me, even with beat 2 outlining the essential tritone. I think it’s unlikely that LvB would feel the line hitting a vertical 7th on beat 2 and a 4th on beat 3, both resolving up (the “wrong way”), even at the tiniest submetrical level. Any harmonic motion seems even less likely in that bar if we regard the slur as more important than the beams (which of course we do).

All that said, I do agree that he intended no internal accentuation!
Top

I am not proposing an upward resolution of the sevenths, MJCube. As I mention in the post and show in the diagram (but not clearly), the B flat resolves normally down a half step to the A in the violin accompaniment, just as it resolved in the piano a measure earlier. I put in dotted lines to show this in the diagram below. (What was not quite accurate is that the Bb passes from the previous C, and then resolves to the A. EDIT. I have clarified that in the diagram below with dashed lines.)

But I understand your qualms about hearing a strong V7 here and greatly respect your reliance on what you hear, which is clearly the only way to go. I had similar qualms, but after much soul-searching and experimentation, find that I do hear a V7 here at a low level of structure. What I find most convincing is that final note of the run, the G, which to me sounds like part of the harmony at that point, not like an inconsequential passing note clashing against the F triad. If this G is part of a harmony, that harmony cannot be an F triad. The fact that Beethoven seems to be demanding an emphasis of this note through the slur, the cresc, and the subito P, seems to bear out this conclusion.

I don't know what your theory persuasion is, but I look at harmony in levels, not in strictly linear fashion, so that a "little" I—V7—I can be born out of a single triad by simple passing and neighboring note motion. This is shown in the third grand staff below. Do we hear the chord labeled V7 as a "real' chord over a F pedal point—after all it has all the notes of a V7 in it—or is it just passing and neighboring notes within a F chord? Actually, it is BOTH and it is only the frame of reference that determines how we understand it. So we CAN hear an overall F chord here, and yet still hear a secondary I -V7-I progression within it. (Please forgive me if this is old news.)

So an alternate and possibly better analysis, since I too am suspicious of the low C with the question mark, might be as follows. Described in words: a F drone is held under a light I-V7-I progression in the upper voices: 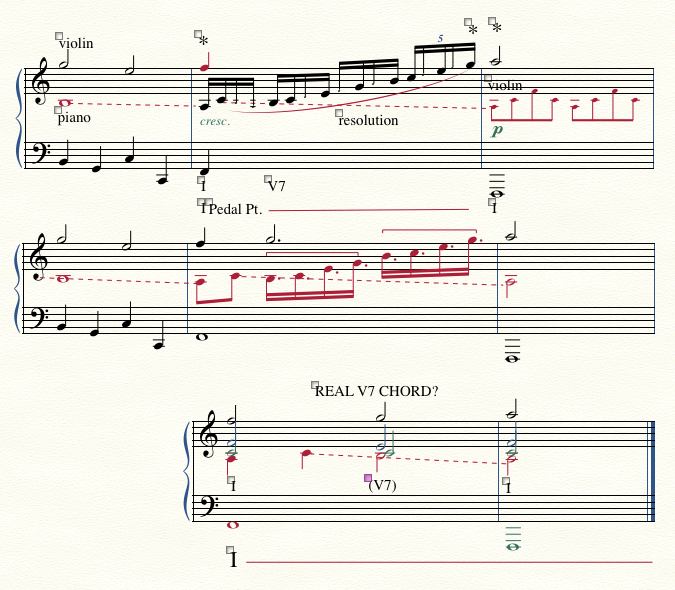 John Ruggiero wrote:The additional force of the beaming in A conveys that there should be no internal accentuation, which means more than just legato.

Sure, but isn't it automatically implied that a slurred passage should have no internal articulation when there is no articulation present? I'm a bit unsure about this, since I'm neither a pianist, nor a classically trained musician, but to me, beams are much the same as stems in that they bear no special meaning with regard to execution, except for rhythmical clarification.
Top


...isn't it automatically implied that a slurred passage should have no internal articulation (sic, accentuation?) when there is no articulation present?

No, it isn't. Most legato passages still express the beat through at least slight emphasis. It is only special passages that don't. One way that composers have shown such special passages is through beaming. Another example of this would be beaming over the bar line to cancel a downbeat.
Mac mini (OS 10.8.5) with dual monitors, Kurzweil Mark 5 with M-Audio Midisport 2 x 2,
Finale 2014d with GPO 4, JW Plug-ins, SmartScore X Pro, Adobe InDesign CS4,
Inkscape .48.5 and .91, FontForge 20150526
http://www.cantilenapress.com
Top
Post Reply
24 posts