Have your scores reviewed by other users. Comment on old and new published scores and on publishers.
Post Reply
152 posts

Attached is my initial re-engraving of Brahms Op. 119, No. 1, based on the 1st edition by Simrock.
None of the mistakes and discrepancies I've found between the manuscript and the edition has been corrected yet, as I'm waiting for John Ruggero to present his contribution before doing so.

That said, any comments are most welcome. 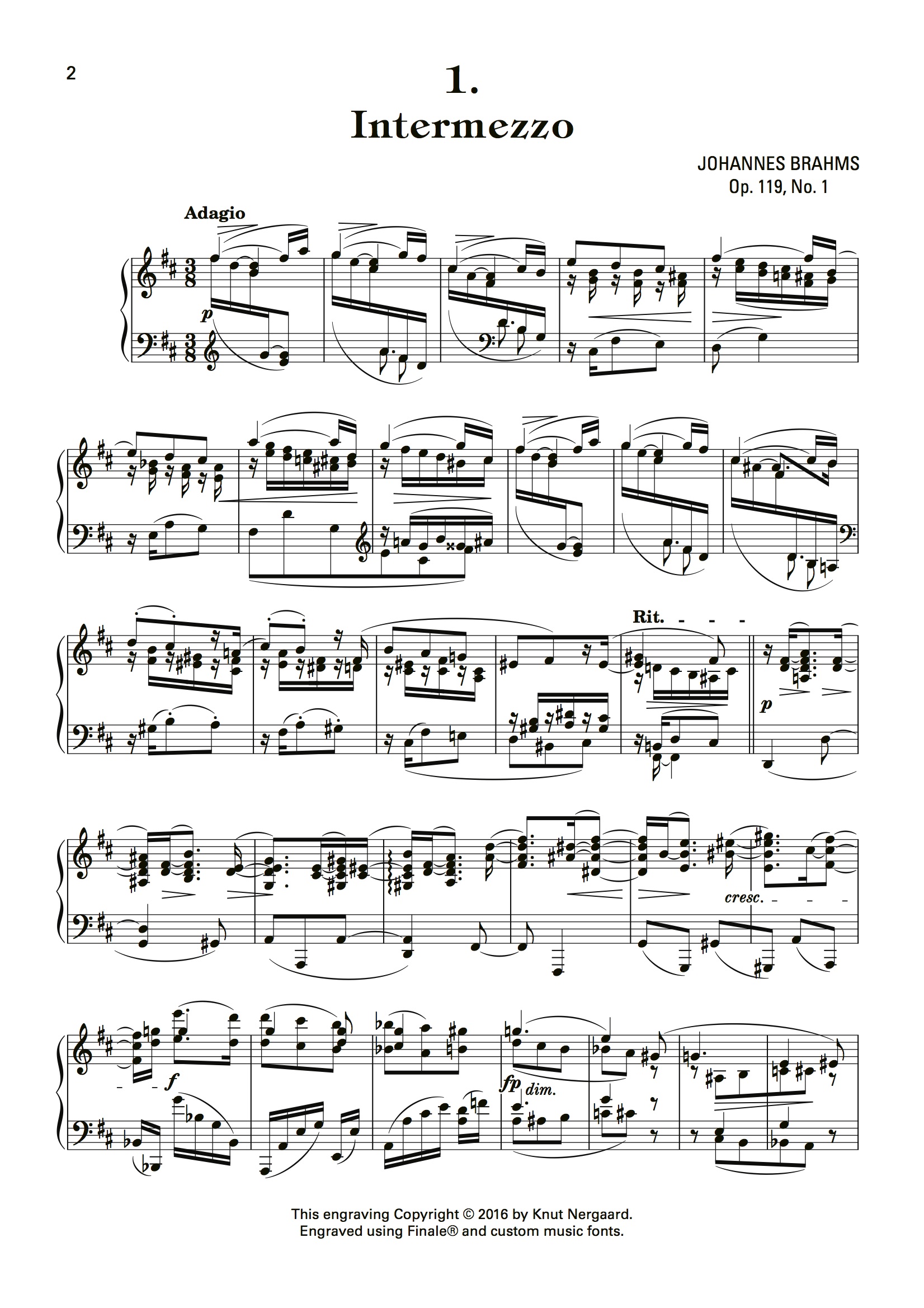 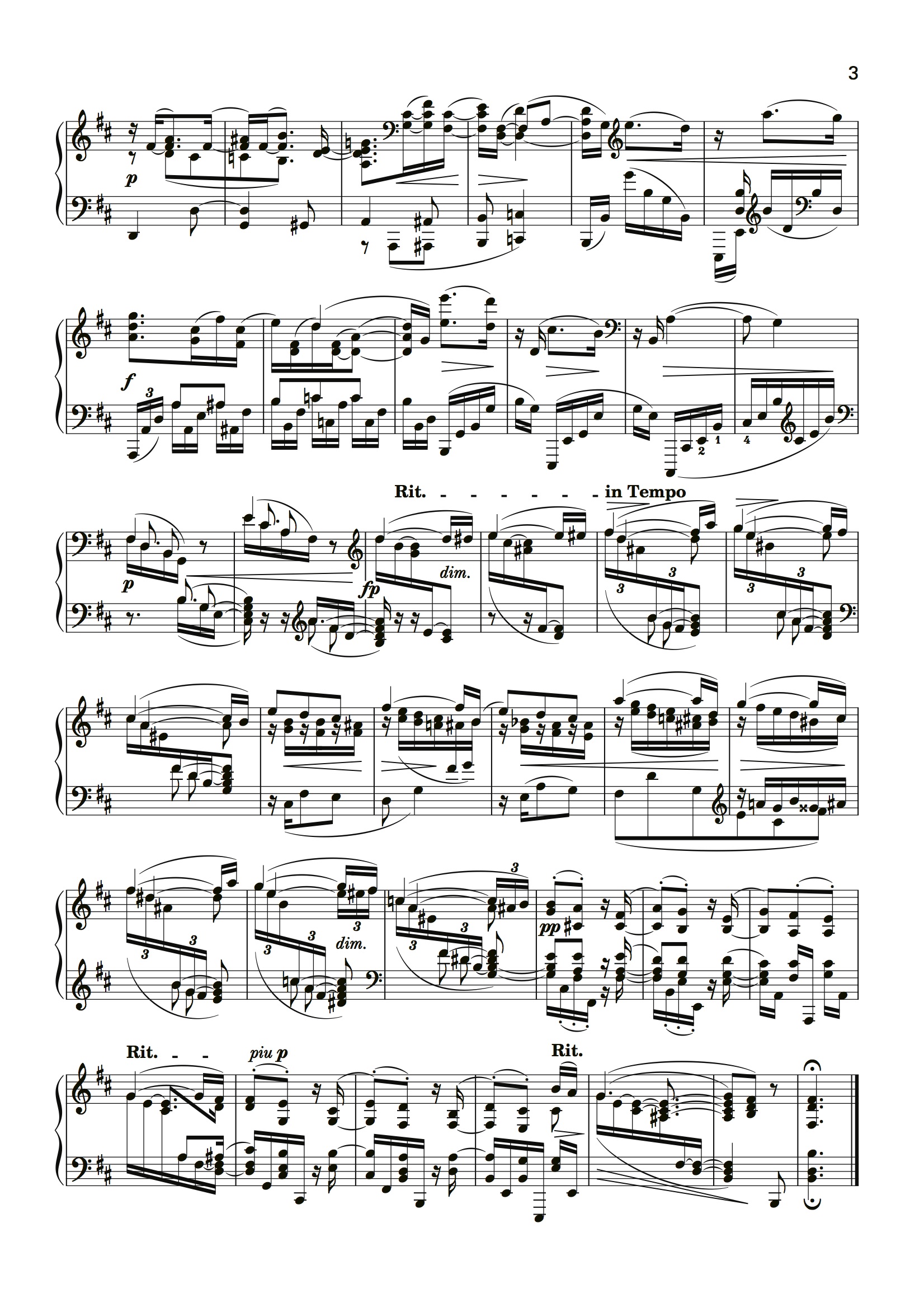 Really beautiful. Very nice balanced in BW power, good spacing.
What text fonts do you use?
Going from back, some kerning of noteheads would be good to have. 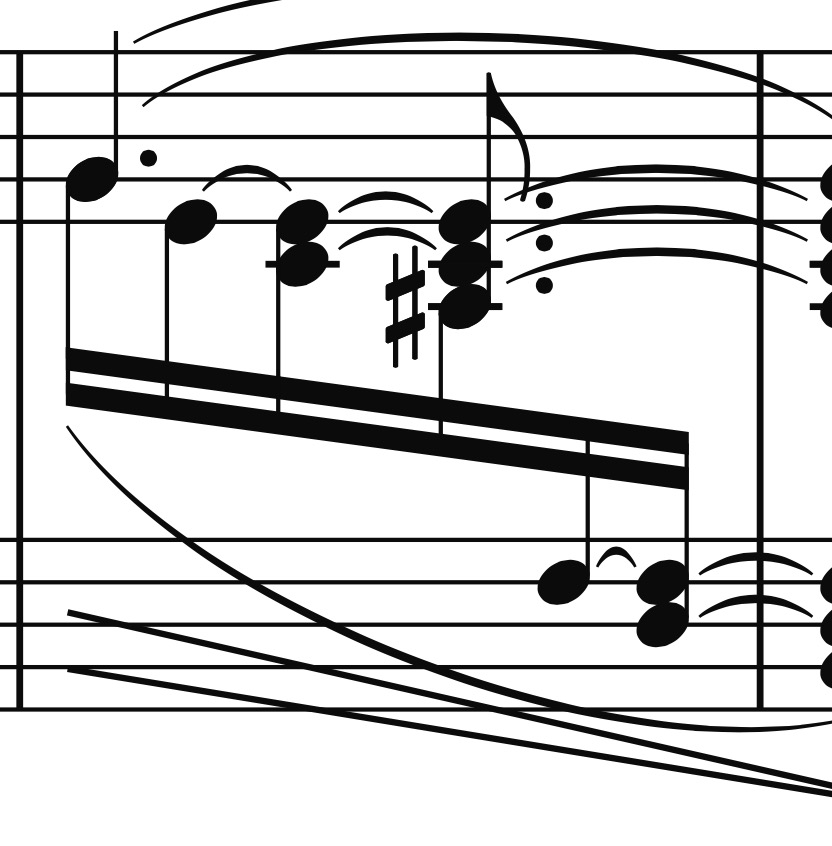 OCTO wrote:Really beautiful. Very nice balanced in BW power, good spacing.
What text fonts do you use?
Going from back, some kerning of noteheads would be good to have.
shot 1.jpg

I've used New Century Schoolbook and my own italic font for text in the score.
The title is ITC Tiffany, and other text objects are done in Univers.

You're right. I must have missed that one. Similar passages in the score should be properly spaced, though.
Top


None of the mistakes and discrepancies I've found between the manuscript and the edition has been corrected yet, as I'm waiting for John Ruggero to present his contribution before doing so

That is very good of you, Knut. My engraving is finished, but I am taking my time and enjoying the final proofing and tweaking, and I definitely don't want to add a bunch of my own errors by rushing. I will definitely post an errata list tomorrow and hopefully my engraving shortly after that. I have not looked at your engraving so that I am not influenced by your decisions, but I am greatly looking forward to seeing it after I post.
Mac mini (OS 10.8.5) with dual monitors, Kurzweil Mark 5 with M-Audio Midisport 2 x 2,
Finale 2014d with GPO 4, JW Plug-ins, SmartScore X Pro, Adobe InDesign CS4,
Inkscape .48.5 and .91, FontForge 20150526
http://www.cantilenapress.com
Top

Thanks, John!
Looking forward to it.

I'm also very much anticipating a re-engraving of this piece in LilyPond. Any takers?
Top

I'm also very much anticipating a re-engraving of this piece in LilyPond. Any takers?

Knut wrote:I'm also very much anticipating a re-engraving of this piece in LilyPond. Any takers?

Knut wrote:I'm also very much anticipating a re-engraving of this piece in LilyPond. Any takers?

To summarize from the previous thread, since Brahms’ meticulous editor at Simrock, Robert Keller, had died, this piece did not receive the same level of critical scrutiny that Brahms had come to rely on. This allowed errors from the composer's autograph (MS) that recurred in the hand copy prepared for the engraver (EC) to remain uncorrected in the first edition.

m. 2-3 These“intensity marks”, like all accent marks, should not be angled. m. 1 is correct; m. 2-3 is not. The angled appearance in the MS and EC is a handwriting mannerism forced by the slurs and should not have carried over into the engraving. Such intensity markings were often misunderstood by engravers as dim. markings, which are sometimes angled. More intensity markings occur in m. 17-18.

m. 4, 6 The RH middle voices should be beamed as in m. 12 and the rest of the piece. Brahms started off with separate flags in the MS, then changed his mind and decided to beam over the rests but didn’t correct these first two measures. The EC also failed to make the correction and this found its way into the first edition.

m. 5 The middle voice should be split as in m. 51. This was pointed out by Knut. This division is clear both times in the EC.

m. 6-7 compare with m. 52-53. The hairpin is possibly problematic, both musically and and textually. It doesn’t exist in the MS and occurs in a different form on its recurrence in m. 52-53.

m. 10-11 The RH intensity markings are missing in all sources. This would be understandable if the patttern continued on, but leaving out just these two is strange. See also comment to m. 55-57.

m. 14-15 The somewhat unusual nested slurs do not occur in the MS and seem to result from some kind of compromise between the previous slurring of the three note motive and its new continuation in 14-15. In the MS there is are small swell hairpins centered around the E# in measure 15. It is unfortunate that these were apparently discarded in the EC.

m. 16 The LH 16th rest is misplaced or there is an upper one missing. The MS has one only, but EC has one for both LH voices.

m. 17 A precautionary natural on higher A in the RH is missing in all sources.

m. 22, last 16th, through m. 24, first two 16ths, of the RH. The decision to change the stem direction at this point is debatable. The MS and EC continue on with the same stem direction, which avoids visually breaking this very continuous and gradually intensifying phrase.

m. 25 The precautionary accidental given before the B natural in both the MS and EC is missing here. This may have been an editorial decision, but is debatable given the chromatic situation.

m. 29-30 The slur is missing below the RH middle voice. In another situation, a slur might be omitted since it could be considered implied by the slur in the LH, but here it is inconsistent with the m. 27-28, where both moving voices are slurred. 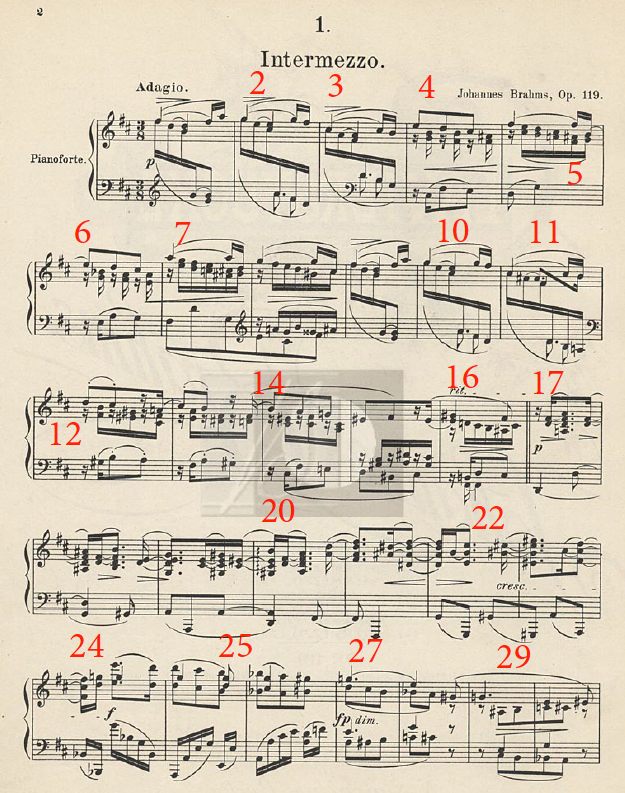 m. 34-35 The highest D in RH should be tied to the first 16th in m. 35.(see m. 23-24 from which this is derived). The tie is clearly visible in the MS, but Brahms had the habit of writing too-short ties in such situations that do not reach to the first note and this created confusion. The top slur should connect the highest D not the F# (which is a tied note) to the G. See m. 38-39 where the slur is correct.

m. 38-39 The highest D in the RH should be tied to the first sixteenth in m. 39. The tie is clear in the MS. The very strange “slur” between the A and D is a misinterpretation of this tie.

m. 39 In the MS a forte stood here and a dim in m. 40. The decision to remove them in the EC was unfortunate because while it is clear that there is a climax in m. 39, it is not clear that a general dim. follows leading to the piano in 43. (As a matter of fact, when I first played this piece, I made a cresc. leading to 41.)

m. 45 The long lower slur connecting the staves as in 46 etc. is missing. Because it was so difficult to engrave?

m. 45-47. The “rit.”, the dashed line and “in tempo” should be above the staves, as in the MS. The EC was forced to place it between the staves because of the lack of space above. That is not the case here, where the markings add clutter between the staves.

m. 49 The first note in the RH should not be dotted.

m. 50-51 the LH slurring differs from m. 4-5. This is undoubedly an error because the three note motive in m. 50 has always been slurred as a unit, and continues to be in m. 52. m. 51 is actually a shortened version of this motive and deserves its own slur.

m. 55-57 The last LH chords in each measure should be beamed with the triplets as was done previously throughout the piece.

m. 55-57 The intensity markings are now completely missing in RH, which creates confusion. Is a different interpretation intended? This does not seem to be musically justified since the intensity of the music has actually increased with the triplets. Observation of the MS explains what happened: lack of space for these markings. This was carried uncritically into the EC and the first edition.

m. 61 As it stands, the C# appears to be a dotted 16th rather than a dotted 8th. The C# should be stemmed with the E as an 8th note on the right side, not as a 16th, on the left. The EC misunderstood the MS, which is correct but a mess. This carried over into the first edition. 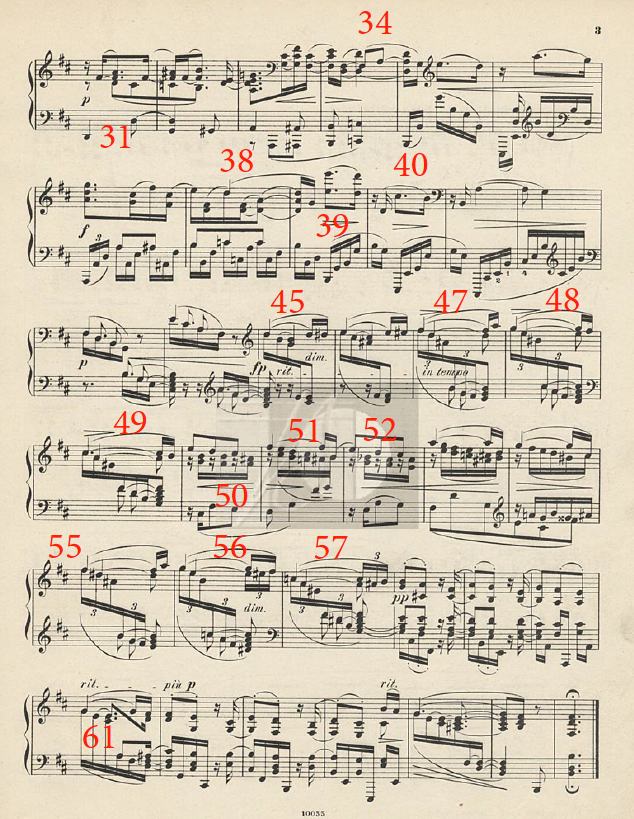