John Ruggero wrote: ↑
09 Dec 2017, 00:20
Another possibility would be to write out the first one exactly as you find yourself actually playing it. You might discover that you play it somewhat the same way each time even if it is irregular.Then "sim." over a gliss. line for the others.

The all three examples are written exactly as they would be performed.


David Ward wrote: ↑
09 Dec 2017, 07:48
As a non-vioinist, but one contemplating the writing of a violin concerto, I don't think I'd even write quite as high as no 2 (the B a minor 3rd below that D might be my notional highest), so it's interesting to see a violinist writing way higher.

), which would be just minor third down from the highest note in my example. I know it is easier to be so high on the cello than on violin, but a bit extravaganza is welcomed here.
Freelance Composer. Self-Publisher.
Finale 25.5 • Sibelius 2019 • MuseScore 2+3 • Logic Pro X • Ableton Live 9+10 • Digital Performer 9 /// OS X El Capitan, (side system: Debian 9, Windows 10)
Top

I meant with exact pitches the first time. But this may be completely contrary to your intention.

Taking back this topic, I continue with my violin piece in MuseScore.

A very interesting thing is clear: MuseScore is not capable of doing many things automatically, and therefore I am forced to do manual adjustments, thus taking my own decisions in pure engraving. Also, with manual adjustments you will never get equal-to-all positioning which adds some kind of beauty. It was interestingly explained in Zizek's talk about imperfection and falling in love ( https://youtu.be/7xYO-VMZUGo?t=140 ) but I indeed want to stress how the total control of Sibelius' magnetic layout makes scores not looking beautiful but looking - plain.

I have done now the first page of my violin piece in MuseScore 2.
I have started on Linux about year ago, than on OS X than stopped; and now continue working on Windows 10 and a large monitor (27" BenQ).

What I can say: the output is very good, better than what I expected. I have started the same score in other software, but I was unable to do the same appearance in Sibelius and even not in Finale. to continue in MS was indeed appealing. There is something pretty nice in lines, curves and spacing, that makes MS look better in this case. But I have edited manually all measures, nothing is by default. What is very nice, as I have described before, I have been able to move items and keep them there fixed, which is very good. Sibelius makes that almost impossible, even when the magnetic layout is turned off.

Here is the first page, zoomed out, but for people interested in having a full PDF page, let me know and I will send it to you privately (I am not sure how to share a file with just a certain people, and I don't want this to be available for download, that is why. The piece needs to be performed and registered first). 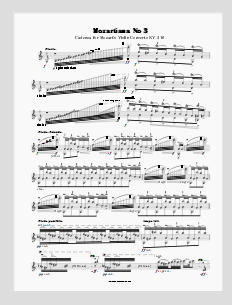 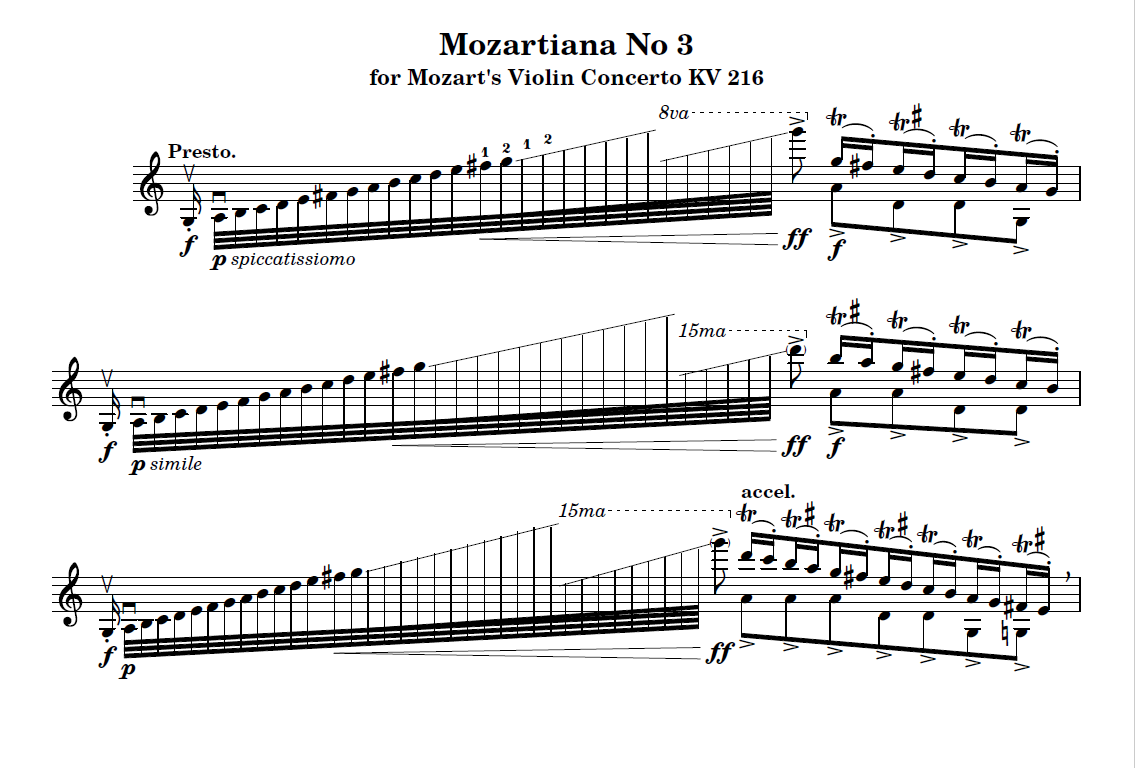 That's really nice, Pierre. And so is the font. The left side of each slurs could be closer to the beams. And the trill accidentals look a little large to me. Are those things adjustable?
Mac mini (OS 10.8.5) with dual monitors, Kurzweil Mark 5 with M-Audio Midisport 2 x 2,
Finale 2014d with GPO 4, JW Plug-ins, SmartScore X Pro, Adobe InDesign CS4,
Inkscape .48.5 and .91, FontForge 20150526
http://www.cantilenapress.com
Top

OCTO, the MuseScore looks perfectly acceptable to me (except for the treble clefs

.) But the dashed lines do look a little strange. Can one change the settings for those? I do like the spacing of the first three measures in the LilyPond better from the purely visual point of view, although I think I understand why you did it as you did from the musical point of view. The slurs are sometimes running into the staccato dots. Does MuseScore have collision avoidance?
Mac mini (OS 10.8.5) with dual monitors, Kurzweil Mark 5 with M-Audio Midisport 2 x 2,
Finale 2014d with GPO 4, JW Plug-ins, SmartScore X Pro, Adobe InDesign CS4,
Inkscape .48.5 and .91, FontForge 20150526
http://www.cantilenapress.com
Top

Interesting, your example in LilyPond looks (not fonts) very similar to MuseScore. I just wonder if there is any similarity in the core of both programs.

Not "total control" of all aspects, as one would do in Finale. I have problems with the distances from the circled letters and lines, I haven't found solution how to change this:

John Ruggero wrote: ↑
14 Nov 2018, 17:41
I do like the spacing of the first three measures in the LilyPond better from the purely visual point of view, although I think I understand why you did it as you did from the musical point of view.

Exactly. The initial output in MuseScore is almost the same as Pierre's, and it is indeed more correct, however I have felt free to edit that.

John Ruggero wrote: ↑
14 Nov 2018, 17:41
the MuseScore looks perfectly acceptable to me (except for the treble clefs

I know... I have used to have it, so now I have accepted it. The treble clef was even worse some years ago, now is better. I haven't tried to swap only the clef symbol with another font, so I don't know if it is possible to change just that.

Where exactly? I have tried to find the collisions but didn't find any. However, I have found other things that should be fixed!

Very limited. Almost every thing (except note spacing) should be fixed manually. Slurs are snapping good, but sometimes they cross over even noteheads. Accents and tenutos lift the slur, but not staccatos.

In spite of this, I find that manual positioning is very healthy. Of course, if you know how it should be fixed, otherwise it is a nightmare (as numerous examples on musescore.com ).
MuseScore is more like an empty canvas. Than it should be manually edited, every measure and every system must be fixed for itself. It is somehow a tedious and time consuming work. I guess it is similar to LiLyPond or SCORE, but for myself I need to have GUI in order to work - just because I don't have time to learn another language...
There is something interesting in a manually edited score, where all parameters and positions "vibrate" because they are not automatically fixed to look the same. Such as flowers in a field: if all flowers looked exactly the same the experience wouldn't be as all flowers have small variations.

On the contrary, I have not found a comparable smoothness in other software, even not Dorico. All symbol connections are perfectly positioned (to 100%), if one knows "stem connections" and "flags out of place" in Finale - that is what I mean.

Yet, I am not so sure if I would use MuseScore in my more complex a3 orchestral scores. I don't know if it would work and not becoming just a corrupted mess after a while. There are none examples of such scores, so I stay away. Unfortunately. It is pity that nobody from MuseScore has never created a "Takemitsu like" or "Messiaen like" full score with parts in order to demonstrate the stability of the software.

John Ruggero wrote: ↑
14 Nov 2018, 17:30
That's really nice, Pierre. And so is the font. The left side of each slurs could be closer to the beams. And the trill accidentals look a little large to me. Are those things adjustable?

Thank you John; yes all sizes/position are adjustable. I've change the slur settings and the sharp size.

OCTO wrote: ↑
15 Nov 2018, 03:58
Interesting, your example in LilyPond looks (not fonts) very similar to MuseScore. I just wonder if there is any similarity in the core of both programs. [...]

The answer is "no" at 90 %. I remember having read something about it years ago but cannot find the thread.
Here's another output: 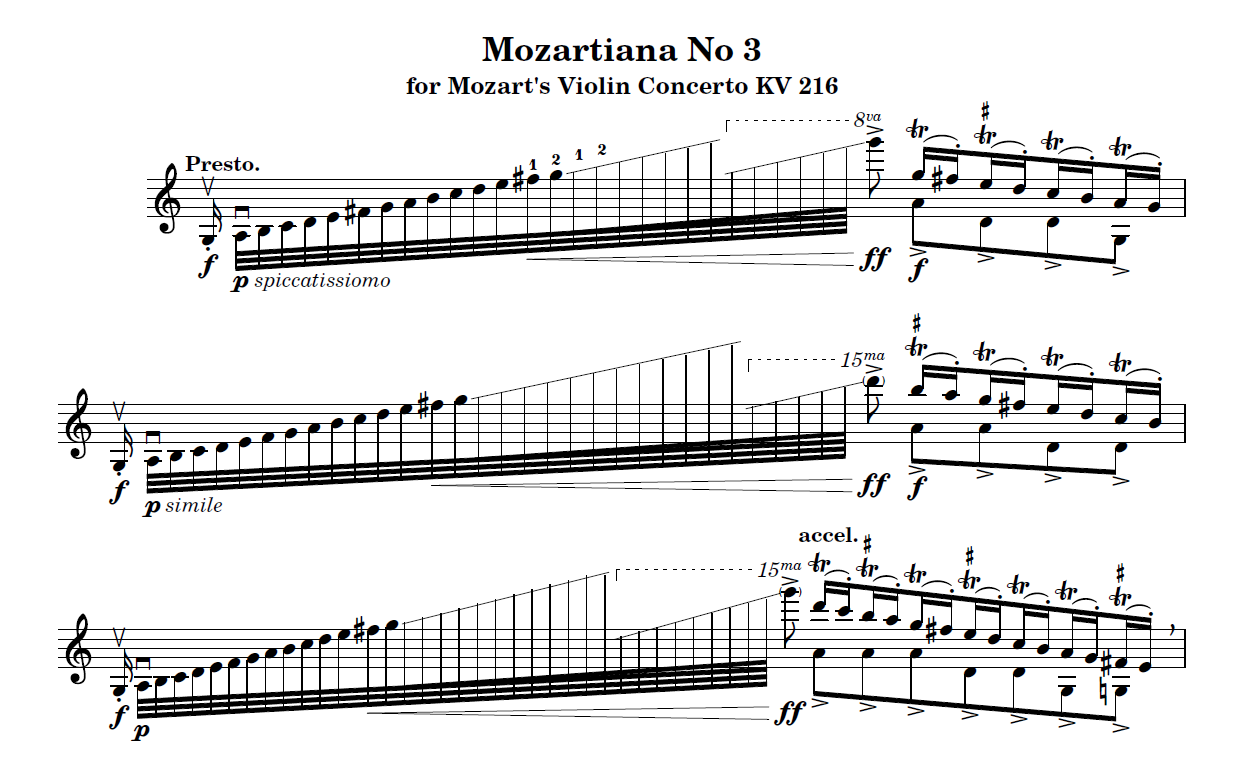 
Octo, I think your work with MuseScore is great. I'd never thought that the output would be so nice. It's a nice surprise.
Congrats.

Could you show us a partial screen shot as per page 1?