Oh dear, oh dear: why was Dorico not around when I started computer notation?

I'm soon to be 78 and realize I simply can't face learning new software to replace Finale, but am instead frustrating myself trying to revise a huge - gigantic, 16 very large files - piece originally typeset in Finale 2010, but now opening with frustrating (but so far correctable) font errors in Finale 25.5.

I'm soon to be 78 and realize I simply can't face learning new software to replace Finale, but am instead frustrating myself trying to revise a huge - gigantic, 16 very large files - piece originally typeset in Finale 2010, but now opening with frustrating (but so far correctable) font errors in Finale 25.5.

I need (but can't afford) a full time assistant!

For what it’s worth, I’m not 77, but I too was a long-time Finale user and I got the hang of Dorico within hours. I found it intuitive, straightforward and elegant right from the start. There’s really no comparison to Finale in terms of ease of use. What’s more, it keeps getting better faster than anyone could reasonably expect.
Have you given it a shot? Maybe you wouldn’t even need an assistant anymore, not for new projects.

In 1999, I attended a demonstration of Adobe's new DTP app, InDesign, and I was amazed by all the things it could do, which Quark XPress could only 'work-around', or do in time-consuming manual ways; and I was excited at the prospect of it transforming our working practices and making life easier. I was impressed with the thinking behind the concepts and the attention to detail.

That is exactly how I feel about Dorico now: this is how a notation app should be in the 21st century. Let me worry about the notes, and let the software do all the tedious chores. And things will only get better, (in the words of the song). Using anything else is just a waste of my time.

The new Flow Titles features mean the ONLY thing I have to do to produce a working set of parts is to fit page turns. I haven't worried about note collisions in months, or adjusting staves by hand to fill the page.

David, I'm doing several large projects in Dorico -- an 18th-century opera, a concert-scale Mass, and even the Monteverdi Vespers! The division of music into Flows; the use of Layouts and "Players" make it so easy. Doing these things in Finale -- hiding staves for entire movements, or using separate documents -- was just painful.
Top

OCTO wrote: ↑
29 Nov 2018, 14:30
benwiggy, have you completely abandoned Finale for the future projects/publications?

Since Dorico 2.0 came out in ?February?, I've produced several choral mass settings and motets, which are effortless. Almost NO layout work, after setting up the master pages. I'm also re-setting some of the larger concert works that I've already completed in Finale, as I can have a single document with Full Score, Vocal Score and Parts, and ensure greater uniformity of engraving style. (And no differences of opinion between them!)
I've also embarked on some fairly major large-scale projects, including complete operas, songbooks, and other things.

As with Finale, Dorico's out-of-the-box settings still need some tweaking, particularly slurs and beaming, but once you've set them to your liking, you know that the whole project will be consistent.

But I don't miss all the tedious manual adjustment, applying plug-ins (why can't I just HAVE Patterson Beams as settings?); checking for all Finale's layout problems and collisions.

Finale users often find Dorico too constricting -- "Why won't it let me do this?" But flexibility is being added: the new bracket grouping feature, for example. Every time I find a limitation, I know that it will get addressed in a matter of months.
Top

How easy would it be to typeset these pages in Dorico (see 2 scans of the A3 MS)? I think I might work out how to try in Finale, but…

(BTW these pages are not from the opera referred to in my previous post in this thread.) 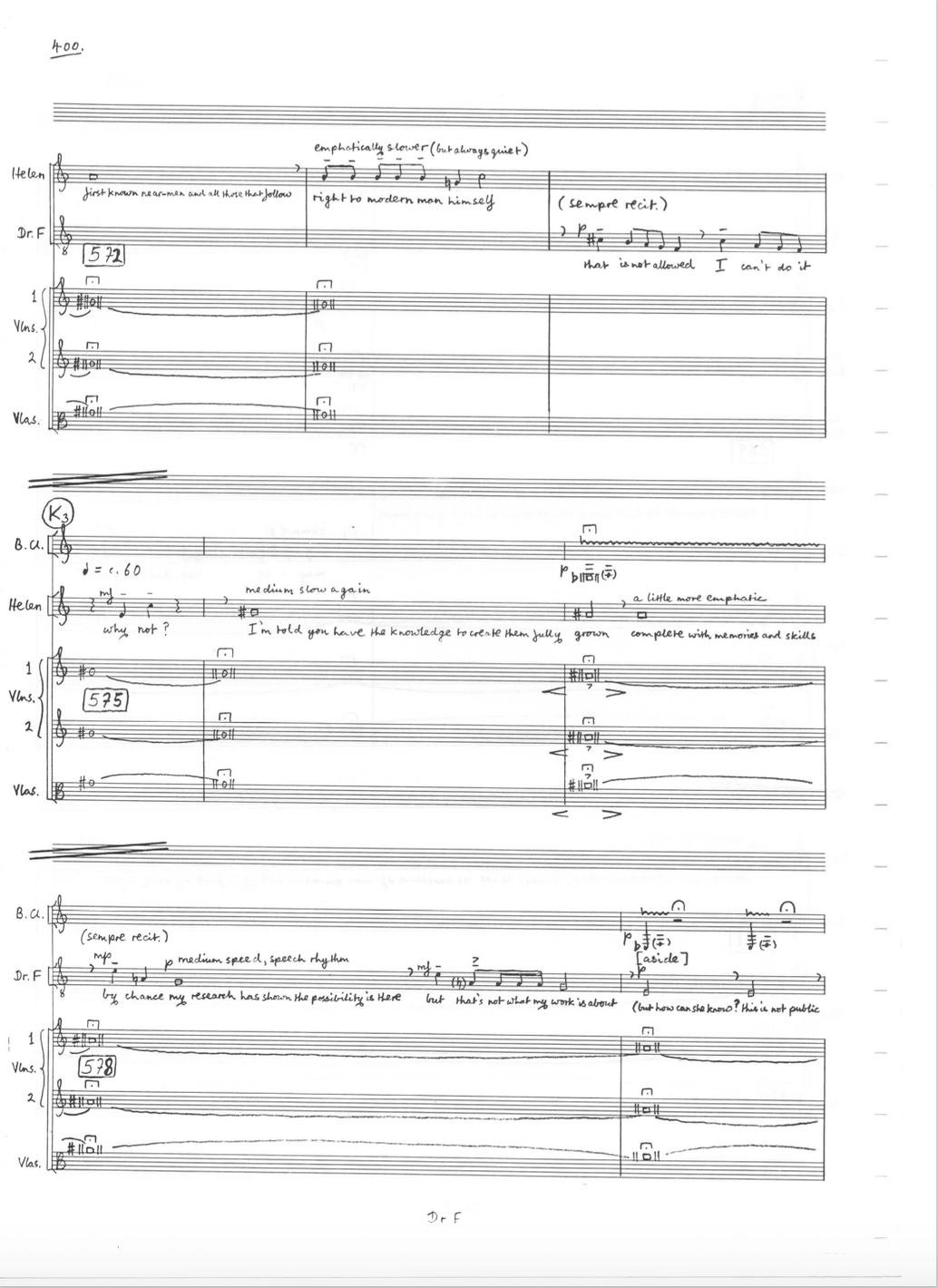 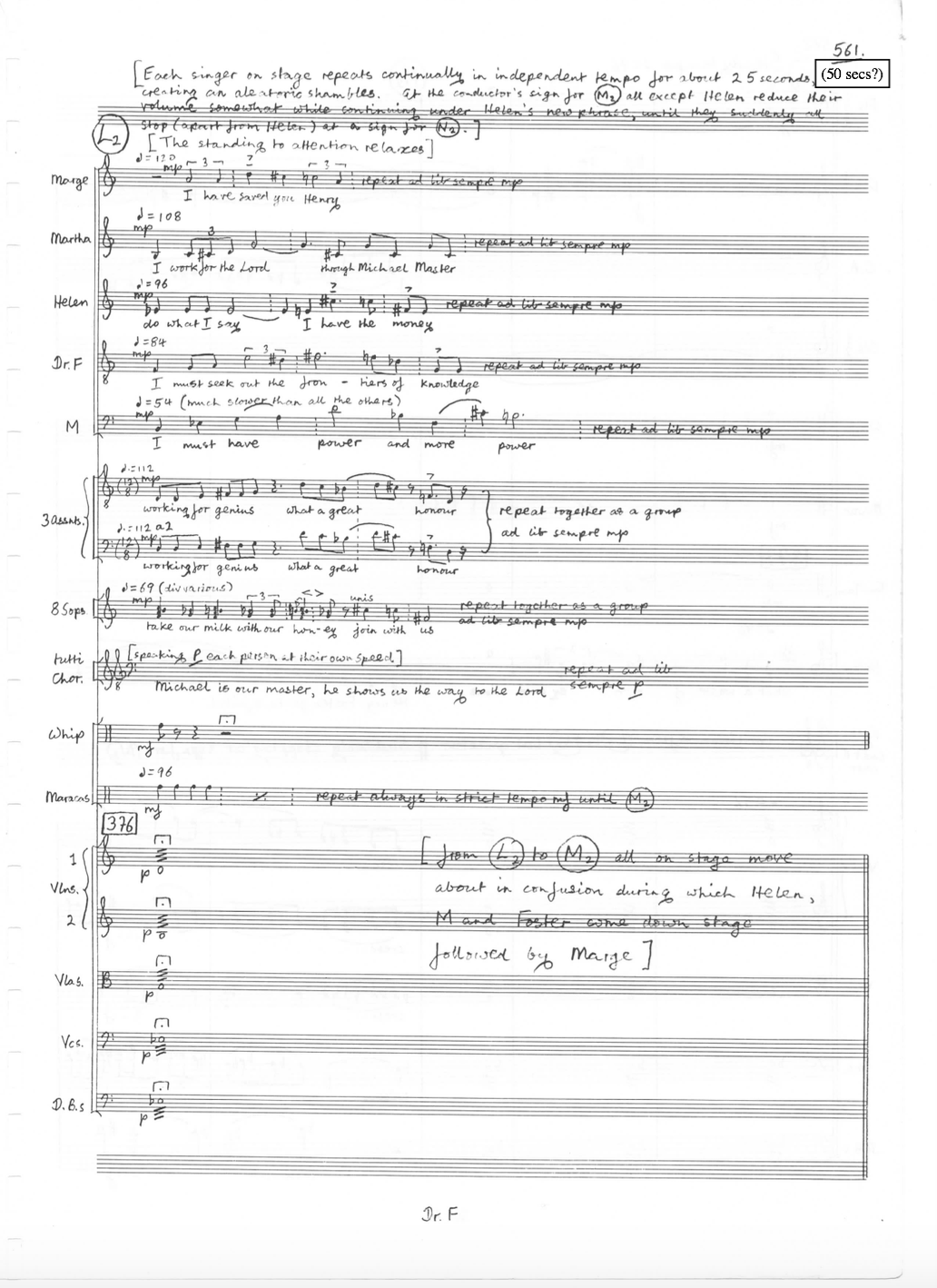 the first page would be easy enough: Dorico copes fine with open metre (also independent metres). Aleatoric stuff is not explicitly handled yet, and might require a bit of fiddling.
Top

Yes, I agree with Ben. Notating the first page in Dorico would be a piece of cake, a matter of minutes.

The second page would be fiddly, to be honest. I’m not sure if it can be done without faking the barlines.
Once there is support for different simultaneous tempos, this too will be a piece of cake though. That’s just the pattern…
Top

The pace of development by the Dorico team is remarkable, and the new improvements to Dorico tempt me to give it another trial to see if I can use it.

The capabilities of the symbol editor were not completely clear to me in the video. Can one actually alter the shape of the Bravura glyphs to incorporate features from other fonts? It did appear that I might replace the Bravura treble clef with my own treble clef as a graphic, avoiding the need to convert it to SMuFL-compliant format. This is very appealing.
Mac mini (OS 10.8.5) with dual monitors, Kurzweil Mark 5 with M-Audio Midisport 2 x 2,
Finale 2014d with GPO 4, JW Plug-ins, SmartScore X Pro, Adobe InDesign CS4,
Inkscape .48.5 and .91, FontForge 20150526
http://www.cantilenapress.com
Top
Post Reply
44 posts