benwiggy wrote: ↑
17 Aug 2020, 13:35
Interestingly, NoteAbility Pro does not seem to be ramping down development: there's a version for iPad now available. I bought just to have a go. It's not going to win any UI prizes, but there's a lot of functions, certainly. 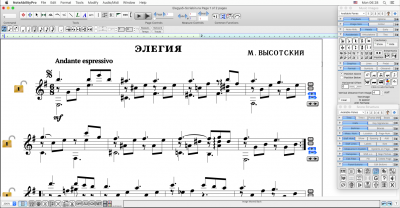 canonperpetuus wrote: ↑
31 Aug 2019, 16:50
About 5 years ago I obtained a copy of SCORE (with PDF user guide and manual) from an acquaintance and have used it in DOS-BOX running on both Windows 7 and Windows 10 machines.

Please excuse me for being jeallous!!

I have enjoyed browsing through a SCORE manual book I found somewhere over the wide internet.
After some sleepless nights of googleing I haven't found even a single option to obtain SCORE legally or illegally

Can somebody please help me with this?
Would love to experiment with SCORE as a new geeky hobby

Have you seen Tantacrul's video showing you the SCORE workflow?

SCORE was fairly expensive - back in the days when software was very expensive. I suspect the only purchases were made by companies, whose copies are now either long gone or in the back of a cupboard. (Good luck finding a floppy disk drive!) Some freelance engravers might have (had) it: I last heard someone say they had it but no longer used it, c. 2005.

I think of SCORE the way I think about metal plate engraving: yes, you can obtain the best results, with a lot of learning and experimenting, but it's an obsolete method from another age. Actually, I'd be more interested in trying sheet engraving.
Top

The true power of SCORE is in its handling of vector curves. In general, it is a vector graphic software, rather than music TYPE setting, since there are no types to type.
As benwiggy suggested, it is obsolete, but I understand your passion!

Yes, SCORE is obsolete now. This makes me feel sad as the real problems with it are the legacy hardware limits (vector limits per page, low screen resolution and that sort of thing); the way it works is fundamentally fine, for those who have the patience for it and who want to work that way. Having spent nearly 15+ years sitting in SCORE working all day it became second nature in the end and it was hard to imagine working any other way.

Having written quite a few tools for manipulating SCORE files, and therefore being pretty familiar with a lot of the internal workings, I did make a start on a sort of desktop clone of it which at least got as far as opening up files and being able to display them in a window (at least partly - to implement the translation of all the parameter types and values into graphics would be a huge job, but I made a start on the basics), but that was rather too much work to keep up purely as a hobby, so I abandoned it. I attach a screenshot for the curious.

Incidentally, though SCORE is all vectors, it doesn't do curves - all the curves are drawn as series of short straight lines! (which is why creating and editing symbols was such a pain) 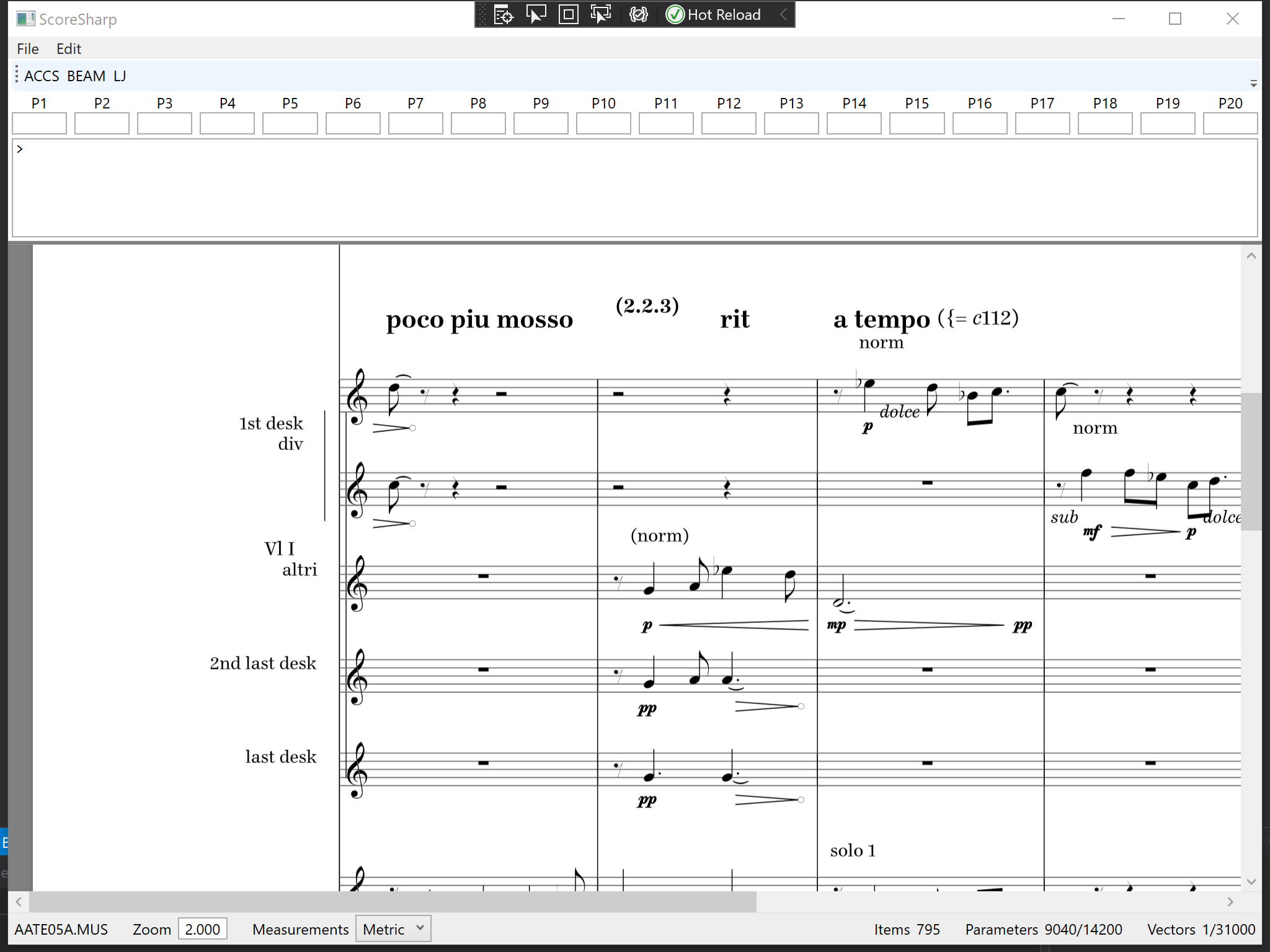 Oh yes, I guessed so!

oktophonie wrote: ↑
19 Jan 2021, 12:24
Incidentally, though SCORE is all vectors, it doesn't do curves - all the curves are drawn as series of short straight lines! (which is why creating and editing symbols was such a pain)

So that's why the font Score (which is I believe extracted from a PDF) looks pretty much zig-zag, not curved!

But, why the code couldn't be translated from Fortran into another language (Lisp?) and transformed into a fully working new app? I am not a programmer, so that is maybe not possible.
Freelance Composer. Self-Publisher.
Finale 25.5 • Sibelius 2020 • MuseScore 2+3 • Logic Pro X+ • Ableton Live 10+ • Digital Performer 9+ /// MacOS Mojave, (side systems: Fedora 32, Windows 10)
Top

Unfortunately the code isn't available; it's not open-source, and when Leland Smith died he left no arrangements in place for what should happen to it, and his family didn't seem interested in doing anything with it.

It would be perfectly possible to recreate it from scratch though (the way it works is fundamentally pretty simple), but it's just something that would take too much time to really be worthwhile.
Top

I don't know where you can get a full version of SCORE I'm afraid, but the freeware preview versions are out there if you look hard enough.

The freeware Windows ScoreView application is available to download from the archive.org server. It opens .mus files and prints to EPS as well as giving a taste of the SCORE experience! Does everything WinScore does, except save.
https://web.archive.org/web/20191226113 ... nload.html

For those wishing to try the old SCORE out, the freeware SCORE Preview (SCORPREV) application (similar to version 3.11 of SCORE and thus requiring DOSBox or similar to use on modern systems) is available from a mirror of the CCRMA FTP server here:
http://mirror.informatimago.com/next/cc ... pub/score/

I know this is late in the thread, but I wanted to make a comment about LilyPond.

I've gotten right up to the point of creating modern scores in LilyPond. I've learned how to tweak all of the elements of the page, spacing, etc. I've used it to publish several academic and scholarly projects in recent years. I've used it for my own music. I've been working with it since 2008.

What I can say confidently is that LilyPond is only usable when the following three conditions are met: That last one is crucial. It is so much like programming, and I've been around enough programmers to know that they are dedicated enough to finding solutions to problems, and lazy enough to avoid learning how to do it from scratch (if the solution exists in someone else's snippet). I started using LilyPond before I started using broadband internet, and so my only source of comfort was downloading the Notation Reference and Learning Manual to aimlessly search for a solution). One of the first biggest projects I made in LilyPond was back in 2013 when I was asked to arrange a selection of a famous work by Brahms for String Quartet. At the last minute, I had additional instruments added to the project, and it was the proving grounds for a lot of concepts in LilyPond.

There are a few things I begged for in LilyPond from the getgo: I still use it for examples, small projects, easy stuff. But, I've given up on my dream of using only open source apps. I love the "openness" of the file structure, but its biggest strength is also its greatest weakness. Sure, I can semantically parse what's going on without the program (if it were to be abandoned), but at the same time that kind of work is as intensive as creating the file in the first place.

Musescore is next for me, but I won't entertain it probably until 4 (edit: I mispoke). By then, more of the glyphs which are missing should be filled in (on the new Leland font... so gorgeous!), and maybe some better intuitive pallets and being able to use open meter, irrational meter, etc. I'd love to use it for analytic notation, but I'm not sure about that yet. Also, it's still too basic to reproduce some scores of Bach, such as keyboard works with 6 voices per staff!
Last edited by DatOrganistTho on 01 Feb 2021, 19:30, edited 1 time in total.
LilyPond Lover
Composer and Transcriber
Teacher and Performer
Top
Post Reply
83 posts