Occasionally, Beethoven and other composers have written slurs that have strange or indefinite endings. The most common case is a slur that stands for legato simile that is, as an abbreviation to continue the legato throughout the prevailing pattern. Such slurs end at improbable points to avoid misunderstanding, as in the beginning of the fugue in Beethoven’s Piano Sonata op. 110. The slur ending at the arrow directs that the following eighth note counterpoint is to continue on with a legato touch:

However, there are cases that have deeper causes, as seen in the first movement of Beethoven’s Piano Sonata op. 101:

At X the slur begins quite strangely on the syncopated bass note E and then continues on into the next measure where it trails off. I say strangely, because Beethoven would not normally slur a syncopated repeated note accompaniment since legato was considered self-evident, and, as mentioned in an earlier post, he rarely slurs repeated notes.

The meaning of this slur was already misunderstood in the first edition, which replaced it with a more normal slur starting in the next measure:

What the engraver didn’t understand is that the bass line ascends through the notes C# D# leading to an expected E, which is forced to appear at first one octave higher than expected for pianistic convenience. It finally makes its appearance in the proper register in the next measure and is then repeated several times in the following, (including another C# D# E shown in smaller type in the example).

Since this is no ordinary E, but the final structural bass note for the entire development section, it was indeed inconvenient that it could not appear in the correct register. To compensate, Beethoven, indicates by means of this strange slur that a conceptual bass instrument is holding a tied E pedal point under all of these measures. I have therefore engraved the slur as it stands in the manuscript, but continued it with a dashed slur for two more measures.

The slur at Y in the first example is interesting because it is a case of an only apparently indefinitely-ended slur.

The first engraver tried to make some sense out of this slur by continuing it on for one more note, which is meaningless (see the arrow in the third example). And he makes an even more fateful mistake by changing the direction of the stem direction of the two thirds. (boxed).

Later editions like von Bulow, Schnabel, Arrau, Cassela including the Breitkopf and Haertel Complete Works include one more note. Tovey adds even another, but, with his superior musicianship, comes close to the truth by adding a dotted line to show the actual course of the voice leading, as explained below.

Schenker found the correct solution. The legato is to continue on into the right hand because this middle voice melody is imitating the G#-A-B-C natural or sharp motive that is used in the outer voices. To include the final left hand notes within this slur is musically impossible, because they belong to completely different voices, as shown by Beethoven’s downward stems in the second example. The actual course of the voice leading is shown in the following example:

However, Beethoven didn’t actually continue this slur beyond the first two notes, because he didn’t need to. Beethoven’s slurs don’t show phrasing; they show legato. And the practice of the time was for articulation indications to affect all voices that moved in the same rhythm. The slur over the upper staff already makes the third and fourth notes of the alto voice legato. Only the first two notes that begin in the left hand need a slur, because they have a different rhythm.

Thus Beethoven wrote a simple two note slur that trails off a little because his musical instincts and emotion always controlled his pen, and he felt the notes leading on into the right hand. He assumed that the course of the middle voice would be clear to players because of the stem direction, and therefore it was unnecessary to clutter the music with a slur between the staves, as in Schenker’s edition: 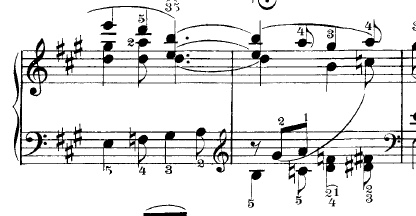 Of course if the water is muddied by changing the stem direction of the left hand notes, as in all the editions except Schenker’s, then the clear course of the melody is complete lost:

and this change seems to have bamboozled some of the foremost Beethoven specialists of the past.

The measures will appear somewhat as follows in my edition: 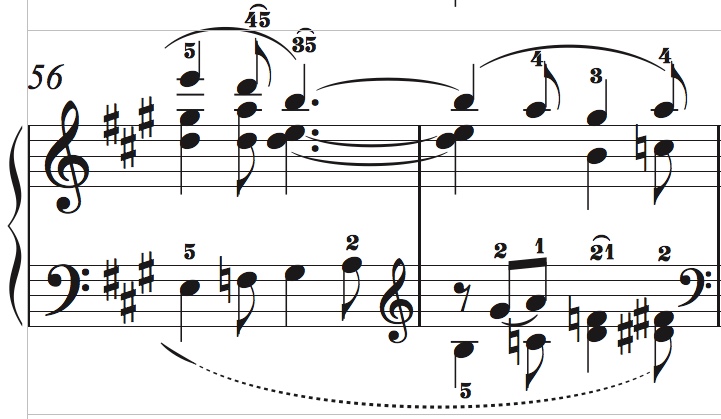 As ever, John, a fantastic and scholarly insight.

Are these going to be available to purchase on your website?

PS. I still shudder at Finale/Maestro's positioning of quaver flags. Never zoom in!

Thank you so much, Ben. I really appreciate that. Yes, it will be available on my website along with the Chopin Etudes. Also Bach's Italian Concerto and other items.

i don't understand why the flags did that when I placed into Notat.io. They are perfectly aligned with the stems at 800% on my computer. Here it is again as a test: 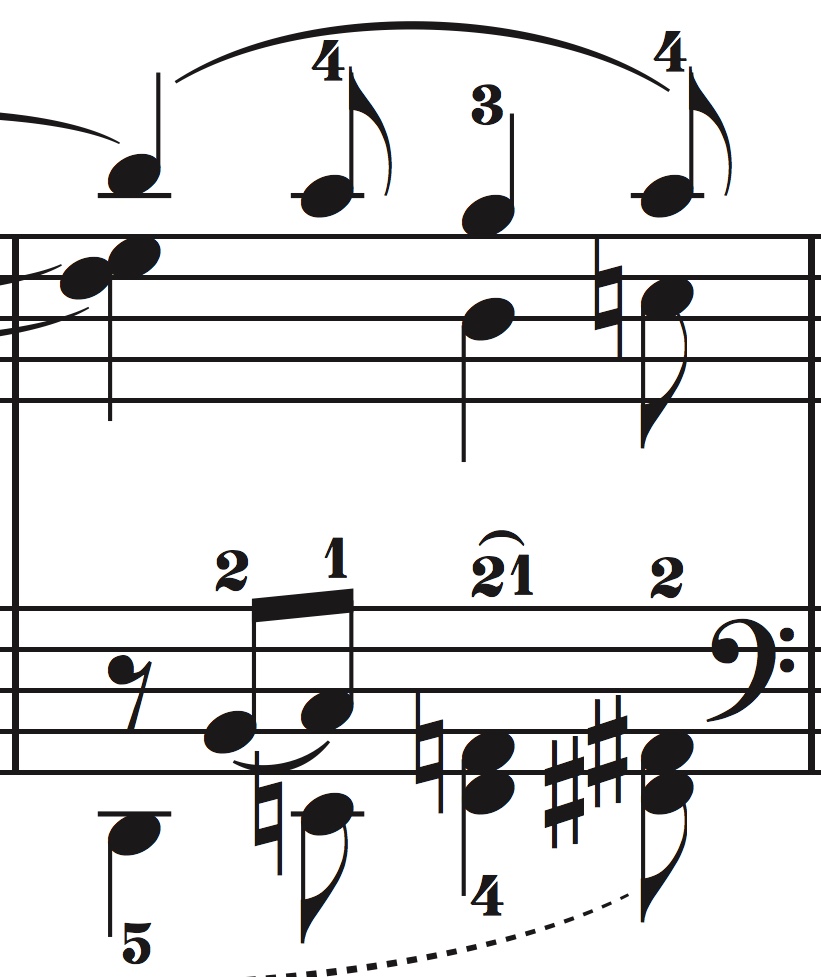 Well, that worked just fine, so this is not a Maestro issue. Very strange. Anyone know what might have caused it?

Yes: some zoom sizes look worse than others, I suspect because of a rounding calculation of using a particular pixel or not.

I used to find Finale's default settings for the position of the flag and the stem didn't quite align; and if you changed the stem thickness, you had to push the flag further away from the note to 'cover up' the stem, leaving an unsatisfactorily long tail. You can just see the stem poking out of your Top As.

I'm not that fond of Bravura's 'quill' flags, either. I prefer podgy flags, with a little bit of air before the note.

But I digress..
Top

Yes, it was a zoom problem.
I just did a flag comparison at https://elbsound.studio/music-font-comparison.php and found that I actually like the Maestro flags better than most because of the air you mentioned, but they have too much air. So maybe I prefer the flags of the very first font in the list, Aloisen New, if they didn't connect so high on the stems.
Last edited by John Ruggero on 21 Nov 2020, 13:37, edited 1 time in total.
Mac mini (OS 10.8.5) with dual monitors, Kurzweil Mark 5 with M-Audio Midisport 2 x 2,
Finale 2014d with GPO 4, JW Plug-ins, SmartScore X Pro, Adobe InDesign CS4,
Inkscape .48.5 and .91, FontForge 20150526
http://www.cantilenapress.com
Top

Aloisen is almost identical to Sonata, as you can see on that comparison. Many symbols are identical. (The same is true of Briard, in some cases the glyphs are so identical that you wonder whether they didn't just copy and paste.)

Apropos of nothing, I've recently interviewed Cleo Huggins, the designer of Sonata, about its creation.
Top

Yes indeed, Aloisen and Sonata flags seem to be the same, and the Sonata flags join at a better, lower place on the stem. The Bravura flags have a similar shape to the Sonata but are thicker. I prefer the more thinner, more graceful style of the Sonata and Maestro flags.

Ben, would you know if the Sonata flags work seamlessly with Maestro? And is Sonata a free for commercial use font? I checked out Cleo Huggins because of your comment. A remarkable person.
Mac mini (OS 10.8.5) with dual monitors, Kurzweil Mark 5 with M-Audio Midisport 2 x 2,
Finale 2014d with GPO 4, JW Plug-ins, SmartScore X Pro, Adobe InDesign CS4,
Inkscape .48.5 and .91, FontForge 20150526
http://www.cantilenapress.com
Top

If you have bought Sonata, on its own or bundled with software, then yes, you can use it in works without further licensing, just like any other Adobe typeface.

You can fiddle with the flag positions in Finale > Document Options > Flags to seat them where you want. While the eighth flags are easy enough, the trick is with the smaller durations, whose flags are composites and require adjusting two separate parts.

So one must still purchase it from Adobe. I saw it offered for free at various sites.