The red arrow points out the whatchamacallit in Beethoven’s manuscript of the second movement of his piano sonata op. 111.

Not really. Beethoven carefully restored the lines that were obliterated by a correction.

It looks nothing like the Beethoven’s usually strongly arched slurs surrounding it. However, that has not stopped editors (starting with the first) from making it a slur. But there is already a slur between the 7th and 8th sixteenth melody notes:

Similarly, it looks nothing like the many ties on the page.

So what is it? Accidental, extraneous lines don’t appear in the manuscripts of Beethoven’s piano sonatas; but this could be an exception. However, the context provides some evidence that the line was intentional.

Now at this very moment he made a correction. The enlargement helps one identify a possible original version. Note the phantom evidence of the stem originally reaching down to the lowest line, and the clearly added two notes in a different size, and the new 16th beam. The strange line was added at the same time: 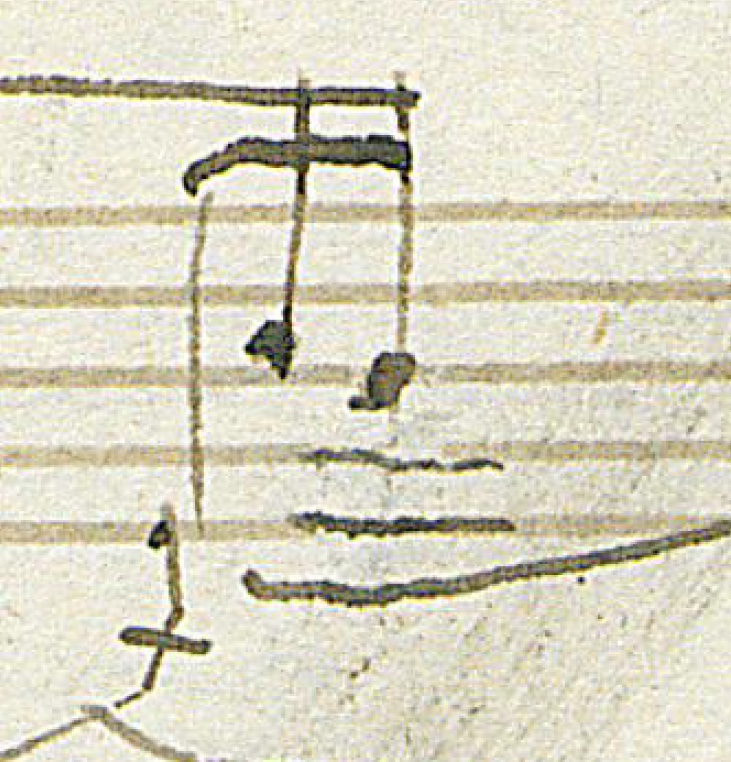 This leads to the following hypothetical original version:

The correction added the urgent anticipation of the next two notes of the melody, a technique that Beethoven is famous for during his last compositions.

However it left a hole in the middle voice. A possible solution was to hold the soprano E through into the next part of the measure as a middle part. (There is even the possibility that he wanted it tied to the next E, although the shape of the line leads one away from this theory.) Perhaps not wanting to rewrite the music with double stemming at this point, and leaving it until later to work out, he simply drew this strange line and then forgot about it. If so, perhaps he intended something like this:

Here is an interesting notation in Scarlatti’s Sonata. K 54:

The wavy line is not a trill according to the Scarlatti authority Ralph Kirkpatrick, but an indefinitely held keyboard note, something like a lasciar vibrare held by the fingers rather than pedal.