There are other interesting cases of stem direction in the third movement of Beethoven's Sonata op. 31 no. 2.

At the beginning, all the right hand stems (but the last marked *) are up. This keeps a consistent stem direction, particularly the eighth notes, which are the structural notes, and also gets the right hand beams out of the way of the left hand beams on a page that does not allow for much room between the staves because of page turning. This theme looks crowded with down stems as engraved after Beethoven's time.

With the change of direction on the final note of the theme, Beethoven seems to be calling attention to the fact that it is exceptional and not short like the others, because when the theme recurs at the beginning of the recapitulation, this same note, again marked *, now a staccato eighth-note, is up-stemmed like the rest. 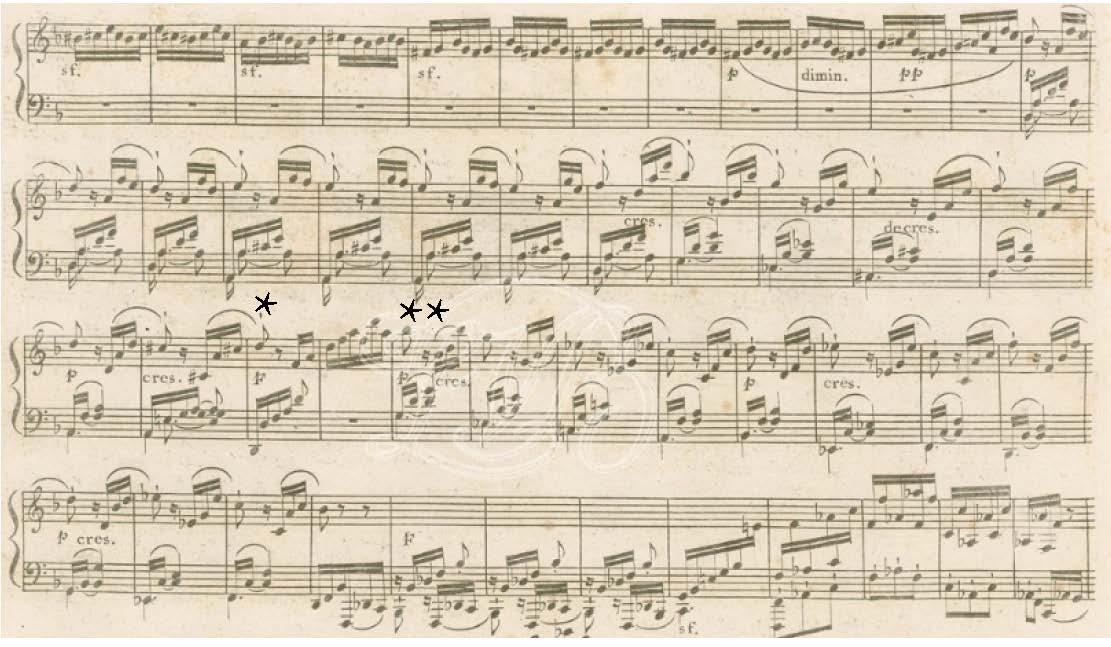 Later editions have considered this quarter note to be an error and made the measure conform to the later eighth-note variation. This change is not based on the two original editions, both of which have the quarter-note and down stem. While one night prefer the quarter note here, it is possible that Beethoven changed his mind about it and corrected it the second time it occurs, an example of "progressive correction". We will never know, but this changes nothing about the stem and its possible function.

The phrase that follows at ** in the previous example is new material. (This transition has always struck me as the most forced and unconvincing stretch of music that I know of in Beethoven's music.) This time the structural eighth notes are all down-stemmed as if to distinguish this phrase from the theme. The sixteenths also start off with down stems, but then change to up stems to avoid running into the left hand.

When the theme occurs once again in the coda, it must now be down-stemmed because of the added upper drone. The rest of the theme maintains this new down-stemming of the structural eighth notes, with the sixteenths conforming as much as possible without running unto the lower staff. Note that the final staccato eighth note of the theme, is now down-stemmed like the rest!

What is the notational purpose of the double-stemmed first sixteenth note of the left-hand groupings? I understand the meaning later when that note should be held throughout, but I don't quite understand why he would double-stem with equal durations.
Top

Schonbergian wrote: ↑
21 May 2019, 03:40
What is the notational purpose of the double-stemmed first sixteenth note of the left-hand groupings? I understand the meaning later when that note should be held throughout, but I don't quite understand why he would double-stem with equal durations.

He really thinks of two voices, not just one note that should be held longer. I think it does make a difference that there’s a second individual voice that starts on the low note, too – it adds emphasis to the downbeat and a very distinct rhythmic pattern to the whole structure. Without those double-stemmed sixteenths the accompaniment would be meeker.
Top

Schonbergian wrote: ↑
21 May 2019, 03:40
What is the notational purpose of the double-stemmed first sixteenth note of the left-hand groupings?

As a great improvisor, Beethoven experimented with all kind of interesting piano textures and accompaniment patterns. Some of these experiments appear in his sketchbooks.

This movement may be one of those cases where, as with certain works of Chopin, one suspects that the opening accompaniment pattern was the starting point for the entire piece. Here he is experimenting with converting a standard bass note—chord accompaniment pattern into something new by jumping very quickly between the two. A similar case occurs in the main theme of the last movement of his Piano Concerto no. 4.

If there were no downward stem on the bass voice, one might be tempted to finger the pattern entirely legato playing the tied note with the thumb and crossing over with 3-2, which would probably be contrary to Beethoven's interesting idea.
Mac mini (OS 10.8.5) with dual monitors, Kurzweil Mark 5 with M-Audio Midisport 2 x 2,
Finale 2014d with GPO 4, JW Plug-ins, SmartScore X Pro, Adobe InDesign CS4,
Inkscape .48.5 and .91, FontForge 20150526
http://www.cantilenapress.com
Top
Post Reply
4 posts • Page 1 of 1