The left hand slurs in the rondo theme of the third movement of Beethoven’s Piano Sonata op. 13 are both elaborate and somewhat unusual: 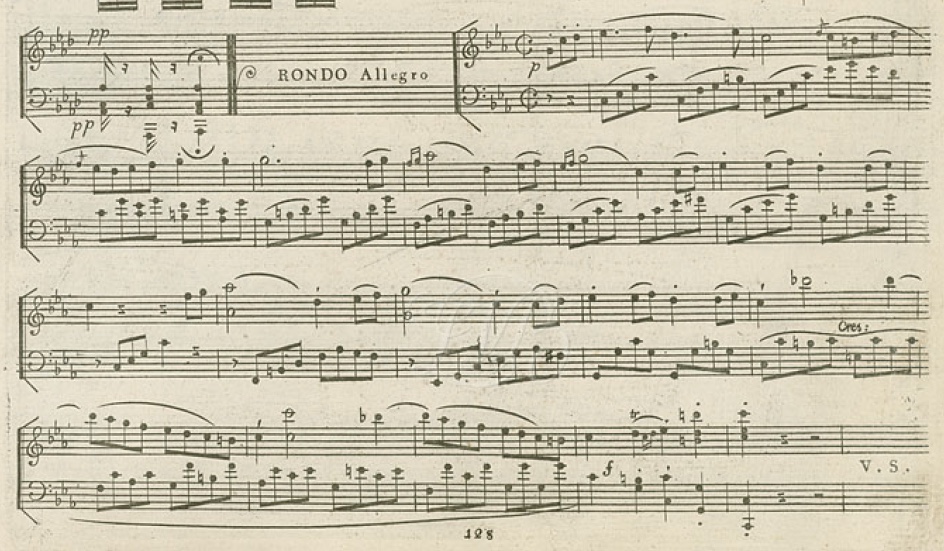 As was standard practice at the time, the slurs over the broken chord accompaniment mean that all notes are to be held through each other with the fingers to create a fuller accompaniment without use of the sustaining pedal. Therefore ms. 1-3 would be played:

Note that left hand sustains where the right hand melody has a sustained note, and the two hands work together to create a richer and more singing sonority than what appears to be on the page. When the right hand has faster notes or staccato notes, there is less necessity or desirability to sustain the left, and slurs are therefore omitted. This doesn’t mean, however, that the bass notes would not also be held at least a little longer than notated since this was standard practice even for unslurred broken chord accompaniment as shown in m. 3 of the second example. And it is something that one's fingers do instinctively, unless the player chooses not to.

The long left hand slur at the end of the theme again indicates a continuous holding through with the fingers to bring out the beautiful voice leading and full texture necessary for the climactic conclusion to the theme.

But the slurs in ms. 4-7 are curious. Beethoven doesn’t usually abbreviate in quite this way. More normally, he would slur over the first two or three consecutive groups, and then end the slurring at an unlikely place to indicate simile throughout. In this case, however, one might contend that Beethoven felt this system would lead to confusion about the group in m. 8, which must be non-legato, even though an unwritten simile was considered to end at the first change of pattern. It is perhaps for this reason that most later editions, like Schenker’s supply slurs on the second beats of ms. 4-7.

But I think this is a mistake. Beethoven is actually notating a beautiful effect by means of this unusual slurring. Once again the left hand slurs match the long notes of the melody and are not present for most of the faster-moving and detached notes. (The exception is, of course, m. 7, where he continues the left hand pattern for consistency.) This creates a more varied and interesting sonority and rhythm for the bass part and a lighter feel throughout:

It also solves an interpretative issue that has always bothered me: the sudden change of left hand articulation in m. 8 is hard to bring off gracefully if the previous groups are all sustained.

Beethoven cleverly continues the new accompaniment rhythm and articulation of m. 8 into ms. 9-10 to bridge the two phrases, a technique that Schenker called “linking”. In linking, something that happens at the end of one phrase occurs immediately at the beginning of the next. (This was a technique that Brahms used extensively, and is seen in many other composers. One might even think of this melody as containing a very expansive version of linking, since ms. 5-8 in their entirety provide the basis for the following phrase!)

In Schenker’s personal copy of his own edition, he has penciled in pedaling for the first half note beats of ms. 9-10. His reasoning may have been that since 9-12 are clearly intended to be more forceful than 5-8, and slurs cannot appear in the left hand because of the linking, Beethoven must have pedaled the first beats just as he had directing over-holding of these notes with the fingers previously. Again, this is what many pianists would do instinctively. Since the second beats of ms. 9-10 are not pedaled in Schenker's copy, this corresponds exactly to the slurred and then unslurred left hand pattern in ms. 4-7 as I feel it should be interpreted.

Were someone to object that pedaling obliterates the non legato linking effect, I would respond that a pedaled non-legato produces a very different result than legato, because non legato does more than detaching the tones; it causes the performance to become more rhythmic and less nuanced, which is felt even through pedaling.
Mac mini (OS 10.8.5) with dual monitors, Kurzweil Mark 5 with M-Audio Midisport 2 x 2,
Finale 2014d with GPO 4, JW Plug-ins, SmartScore X Pro, Adobe InDesign CS4,
Inkscape .48.5 and .91, FontForge 20150526
http://www.cantilenapress.com
Top
Post Reply
1 post • Page 1 of 1