The following chord in “The Old Castle” from Mussorgsky’s Pictures at an Exhibition is somewhat reminiscent. Both passages occur over extended pedal tones, and the appoggiaturas involve dominant ninth chords, so there are two layers of dissonance at work. Mussorgsky prolongs his dissonant chord for two measures, which greatly heightens the effect.

As can be seen both in the first edition and in the corrected copy that was prepared for the engraver, Beethoven actually wrote the following: 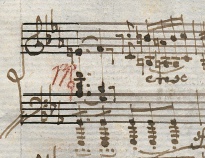 Most later editions make the corrections shown in the first example: the D added to the second chord and the two ties. But I find it unlikely that Beethoven would make three errors and then overlook these errors when adding the dynamic and accidental in orange pencil.

As well, there is a very good reason that Beethoven wrote what he did.

Brahms told Schenker that Beethoven was the most idiomatic composer for the piano because he created his quasi-orchestral effects without burdening the player with unnecessary notes. This makes Beethoven's piano music a physical delight to play.

In this particular case, Beethoven shows how sensitive he was piano sonority along with his desire for keyboard spielfreude. The two appoggiaturas resolve to an ugly dissonant interval, an open seventh. Experiment will show that this is not mitigated by the correction in the first example.

Beethoven’s clever solution is to replay the third, the B natural, which "beautifies" the seventh. He doesn't repeat the D because this would have created too full a sound for the resolution and been awkward to play. Omitting the D in the second chord allows the third finger to connect to the second finger in the second chord to produce a comfortable legato between all the voices in both chords.