At the most dramatic moment in the first movement of Beethoven’s Sonata op. 31 no. 2, the first editions read: 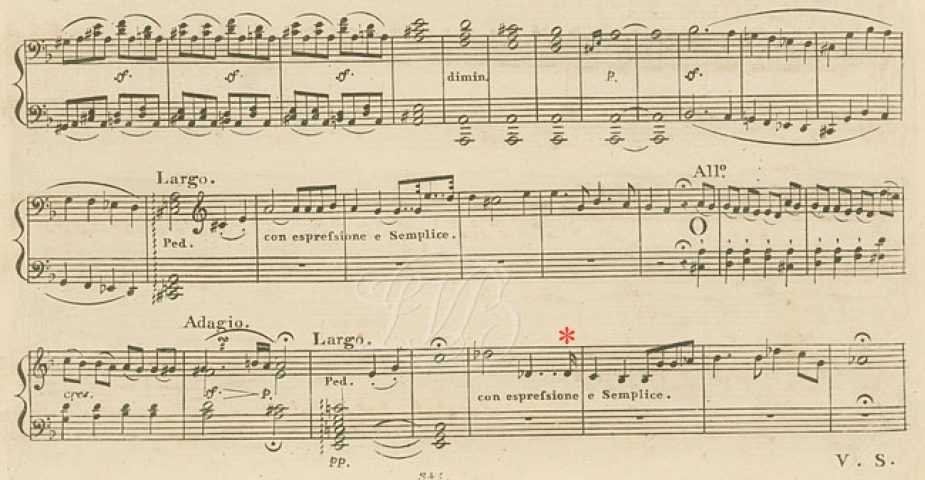 But in a later edition of the sonata in the possession of Beethoven’s benefactor and student, Archduke Rudolf, the starred D flat is corrected to a C natural. Whether the correction was by or directed by Beethoven, however, is still controversial.

The Breitkopf and Haertel Complete Works may have been unaware of the correction and engraved D-flat. Later editors have gone both ways. Schnabel was convinced that the D-flat was correct, as was Arrau. Schenker was just as convinced about the C-natural but, to my knowledge, never explained his reasoning. The latest editors like Perahia for Henle and Hauschild for Wiener Urtext also feel that C- natural is correct.

We have seen that in such cases, internal evidence can be the editor’s friend.

Here is the relevant part of the composer’s two page sketch for the movement as transcribed by Gustav Nottebohm. It is clear from the sketch that the recitative sections were foremost in his mind in his initial inspiration for the movement: 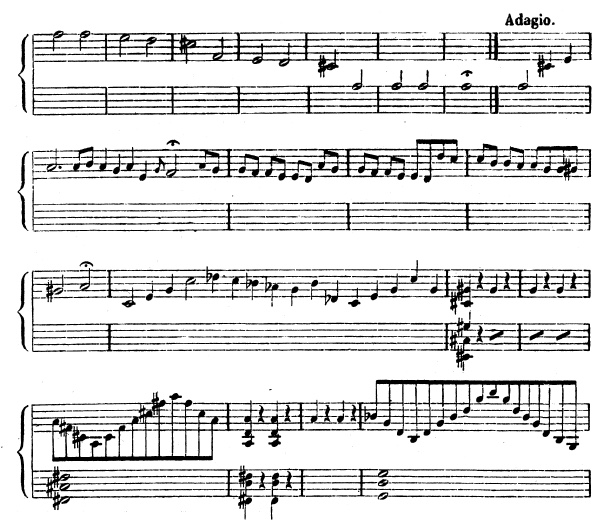 A comparison of the original and final versions is enlightening. The same Schenkerian linear structure organizes both versions, as shown by the top staff. (This structural line is mentioned by Perahia.) This line never changed from the sketch to the final version, while the rest of the movement was highly modified: 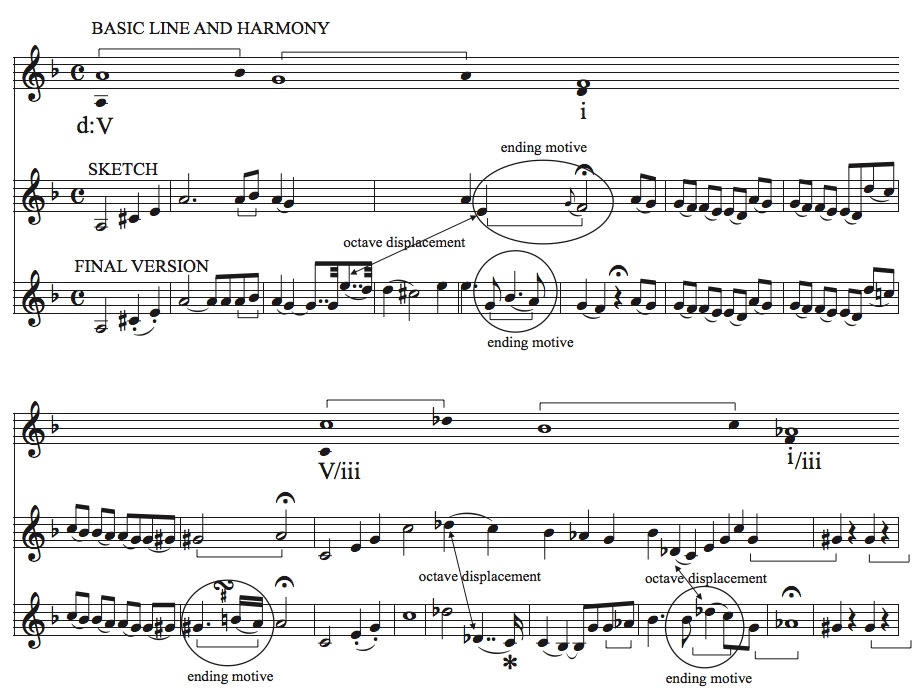 Note the prominent use in both versions of one of the main motives of the piece, an appoggiatura and its resolution, which tends to move downward in groups. I have identified it with a slur throughout the analysis. There is also an inversion of the same motive to form a main tone-escape tone pair, which I have bracketed. Note that the escaped tone motive occurs also within the basic line.

In the final version, Beethoven uses octave displacement of notes in the original sketch to add additional content in each half of the recitative. This is shown by the arrows. In the first part of the recitative, the lowest note E in the sketch is moved earlier, an octave higher, and decorated, This, however, obliterated the encircled ending motive, which required correction in the final version.

In the second part of the recitative, the high and low D-flat-C pairs, swap registers, displacing both. This clearly has a bearing on the controversy regarding the starred tone.

I leave it to the reader to observe the interesting rhythmic parallelisms between the two halves of the final version of the recitative.

For me, Beethoven’s extensive use of the slurred two-note motive throughout the recitative and specifically the significance of the D-flat-C acting in two registers in the second part absolutely requires that the D-flat resolve immediately to a C at the star to form a descending group of two note resolutions; D flat-C, C-B-flat to match the other displaced descending pair E-D D-C-sharp in the first phrase. To do otherwise would be inconceivable. Conclusion: the correction to C-natural is by Beethoven and should stand in first place in the main text as in Schenker’s edition.
Mac mini (OS 10.8.5) with dual monitors, Kurzweil Mark 5 with M-Audio Midisport 2 x 2,
Finale 2014d with GPO 4, JW Plug-ins, SmartScore X Pro, Adobe InDesign CS4,
Inkscape .48.5 and .91, FontForge 20150526
http://www.cantilenapress.com
Top
Post Reply
1 post • Page 1 of 1