Note: To understand Beethoven’s decision in m. 196 of the first movement of his Sonata op. 90 requires dealing with the movement as a whole. The reader may supplement this discussion by following the score at:

In the first movement of the Piano Sonata op. 90, Beethoven confronted and solved a problem that would plague generations of composers who came after him: how to convincingly integrate a large, self-sufficient Tune into a sonata-allegro, which formerly had been based exclusively on short motives and open-ended themes. Here is the beautiful and Romantic opening melody, virtually a piece unto itself, that occurs twice complete and once incomplete at the very end. It is even set off with an ending fermata rest, which makes continuation even harder:

The tune has several interesting special features. The first measure sets out a motive X which is used throughout the first movement. This first measure plus the last three measures are the core of the Tune and also provide a structure for the entire movement. Note that these measures make musical sense as a unit and together also represent motive X.

While these outer measures lie exclusively in a low register, the rest of the Tune fleshes it out by moving up from the G to B and then E within the E minor triad, as shown by the letters in the first example.

The sudden jump up to the high E in m. 16 is the memorable Hook that literally hooks the tune into what follows: first to the F natural in the next section and finally to the fortissimo climatic F sharp and G that is the first of the two areas that are the main subject of this post. It was absolutely essential to the structure of the piece that the F sharp lead as a passing tone in the same register as the Hook to the high G. The resulting wrenching shift to the higher register in m. 53 refers back to the similar shift in m. 16 of the Tune:

The closing section of the exposition repeats the melody G-F sharp (motive a which is derived from the first two notes of X in m. 1) in three registers:

But we await eventual closure of the G F-sharp to the note E to complete motive X. This comes at the end of the development where, after a long ascent that is related to ms. 2-16, a remarkable passage that covers all registers completes motive X to form and lead back the opening of the Tune, which appears complete and unchanged to begin the recapitulation.

From this point, the Hook need not lead on to a higher note because the climactic moment of the movement in the development has passed. Instead, the music focuses on the lower register and motive b (see bracketed motive b in example 1) a C-B that will parallel in E minor the G-F sharp of the exposition.

This takes us to the nota bene measure 196.

At this point the only reason Beethoven needed to achieve a high register was to provide sufficient room for the closing music (a transposition of example 4 up a fourth to E minor) which is based entirely on the expression of the motive b played in several registers. Beethoven even minimized the importance of the moment by means of dynamics and texture: the fortissimo in the exposition (see example 3) is replaced by a simple swell and the five note chords become empty octaves.

To replace the dramatic jump upward in the exposition, Beethoven now jumps downward to the lower B, which now does not need to connect anything to the high C. It also has the advantage of avoiding an ugly gap between the single melody note and the chordal accompaniment to make a sound that is comparable to the full chords in the earlier occurrence.

And it places the B back to its starting register which will now become crucial in ending the piece. 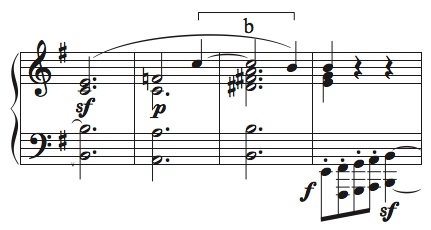 Beethoven reviews the various registers of the piece and its material in the coda. The way in which ms. 16-24 of the Tune appear once again to end the piece reminds one of a sectional form like a rondo. This was just another part of Beethoven’s ingenious solution to the problem of coherence in using Romantic melodies as part of a sonata-style movement.
Mac mini (OS 10.8.5) with dual monitors, Kurzweil Mark 5 with M-Audio Midisport 2 x 2,
Finale 2014d with GPO 4, JW Plug-ins, SmartScore X Pro, Adobe InDesign CS4,
Inkscape .48.5 and .91, FontForge 20150526
http://www.cantilenapress.com
Top
Post Reply
1 post • Page 1 of 1