Here's a succession of beams for the same notes with different durations.

This is what Dorico does by default, and Finale (after running Patterson beams plug-in) does the same.

Do we think that the two bars with dotted notes should have beams at the same length, or not?

In the first dotted bar, the higher note has more beams, so doesn't need to lengthen the stem; and in the second bar, the lower note has the extra beam, so it does need a longer stem, pushing the beaming down a space.

However, there's also an argument that it ought to be the same as the bar that's all 32nd notes.
Top

I was trained by Universal Edition standards, so my opinion may be biased but here's what their Product Design Standards document shows for a flat beam with downstem whose lowest note is in the fourth space. 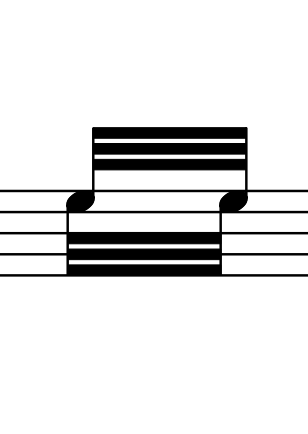 I would make the stem the same length.
Also, the last bars should have the stem shortened, were I to engrave this.
Artistic Score Engraving — music preparation services
Metagrid Viewset for Sibelius
Top

Ooooh. That's basically adding all the third beams without changing the length of the stem. I'm not sure I like that.

Ted Ross says "Approximately ½ to 1 space is added to the length of the stems for each beam more than two."

Yes, UE standards are nice for many things, but sometimes one needs to use their personal judgment.
In this case I would keep it shorter, but it would also depend from other factors, such as whether there would be accidentals or not.
Artistic Score Engraving — music preparation services
Metagrid Viewset for Sibelius
Top

However, the issue here is whether the stem length in bar 4 and 5 should be the same; not what it is should be.
Top

Please forgive me for bypassing the point.
I believe they should be the same. This is one of those occasions when shorter is too short and longer is too long, but having 3 beams there is no other good looking position within the staff.
Artistic Score Engraving — music preparation services
Metagrid Viewset for Sibelius
Top

My opinion is that they should be the same, especially if the bars are consecutive or part of a continuing or recurring pattern. Changing length of the stems can imply a change in pitch or rhythm. This may lead a reader to hesitate and wonder if they mis-read the music.
There is no computer problem so complex that it cannot be solved by a sledge hammer.

Here is what Finale default does with it (no Patterson), which I think is the best solution:

Yes, you're right, but after running Patterson (with all default settings), I get this:

In Dorico, I can fix the error by setting the stem length for beamed 16ths to a value LONGER than that for 8ths! I don't know whether that will have some other effect.

I'm sure that as ever, context is key, and a real piece of music may demand a unique treatment.

I've been trying to find 'real-world' engraved examples of this particular pattern, to no avail.
Top

benwiggy wrote: ↑
25 Sep 2022, 10:54
In the first dotted bar, the higher note has more beams, so doesn't need to lengthen the stem; and in the second bar, the lower note has the extra beam, so it does need a longer stem, pushing the beaming down a space.

However, there's also an argument that it ought to be the same as the bar that's all 32nd notes.

I saw this over on the Dorico forum too, and was curious what the answer was as well. Your explanation certainly "explains" the behavior, but I was also wondering what would be preferred.

I did a little experiment a year or so ago trying to figure out how to get Dorico to match Ted Ross and UE beaming exactly since they both have precisely prescribed examples. After a deep dive into it, I have to admit I'm not really a fan of some of the UE examples. Much of beaming is very subjective, but I would suggest that a few of the UE beaming examples are actually objectively wrong. For example, in the below 4th patterns, the first and third downstemmed beams should never end in hang, only sit or straddle. Prescribing hang there just looks wrong IMO.

Adding a third beam there without extending the stem at all looks pretty strange to me as well, although while flipping through a few etude books to see if I could find Ben's example, I realized some publishers are ok with almost no gap at all between a notehead and a third or fourth beam, like this Karg-Elert example below.