I have mentioned that Beethoven seems to use almost every aspect of musical notation in imaginative and expressive ways. The lowly barline is no exception.

In the second movement of his Piano Sonata op. 22 he uses a double barline to define the first theme of a sonata-form exposition (the manuscript is by one of his copyists):

This may be unique in his output, and at least rare, for the following reasons.

1. Beethoven uses double barlines sparingly; never for key or meter changes, for example, and only to mark off a section he wants set off.

2. The whole point of sonata form is non-sectionalization (something that many later composers seem to have forgotten).

Apparently, Beethoven wants this very lyrical piece to start off in the style of a simple song, which it strongly resembles, whose first part is a closed-off A section to be followed by a B in a different tonality. But then a surprise: this initial impression is found to be incorrect when the next section enters in the tonic and we realize that this a complex sonata movement. This message is communicated through an adroit use of standard and entirely musical notation with no fancy Italian required.

When the section recurs in the recapitulation the two sections are now interconnected and, of course, no double barline appears.

Unfortunately, the first edition replaced the double barline with a final barline, which is overkill and confusing.

The following two cases show expressive uses of the absence of an expected barline:

The first movement of his Piano Sonata op. 109 is unique in fusing two very different kinds of music together within a sonata-form exposition, the first in fast 2/4 and the second in slow ¾. The first slow section ends with a scale flourish whose meter has confused many editors, particularly because of the 2/4 meter indication at the end of the flourish. Schenker was the first to explain that despite the appearance of free time, this bar is in exactly two bars of ¾ time; the 2/4 half-measure represents the last quarter note of the second ¾ bar, but now within the fast tempo:

So this notation might be considered something quite new: a nested meter change.

Note that in the manuscript, Beethoven goes to the trouble of lengthening the staves so he can fit the entire three beats of the first “measure” on that line (there is even a bar line at the end of the line that doesn't appear in the first edition) and thus start the second “measure” on the next. Note also that he actually wrote a bar line before the 2/4 and then erased it after realizing his error:

But why did Beethoven remove the final barline in the first place? With one stoke (or rather the lack of a two stokes) Beethoven tells us that the stormy opening of the second movement should interrupt the decaying final chord of the first movement in an unexpected and startling way, almost as the first movement never had a chance to end completely. For this reason, placing a key cancelation at the end of the line would have taken away from the visual impression of incompleteness...

Unfortunately, while the first edition engraved most of this correctly, it added a final barline, royally ruining Beethoven’s inspired notation. Beethoven’s final barlines don’t resemble his double barlines at all and look like this at this stage in his life: 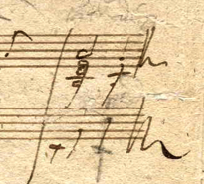 so the first edition had no grounds at all to engrave a final barline. To my knowledge, Schenker’s edition was the first to eliminate any barline at the end of the movement.

In this particular case, condition no. 2 prevails and so a double barline is used. But it appears in the upper staff only to show that the final soprano note C ends the variation. The lower voices, which are confined to the lower staff, have no barline at all since they do not end at this point (certainly not on a first inversion tonic chord) but continue on to finish out the variation (and the three-beat measure of 12/32) on the first beat of the next variation, a pick-up beat. In this way, the final melody note middle C is distinguished from the middle C that starts the next variation, and lower voices of the next variation are felt to continue from those before: 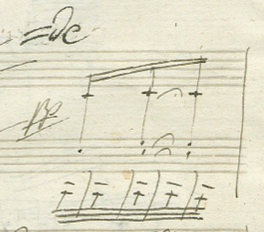 Later editions, including Schenker’s, draw a double barline through the staves and put the right hand entirely on the upper staff in the bass clef starting from the last beat in the variation and continue on into the next variation with this arrangement, which obliterates the wonderful visual connection within and between the variations. My edition may be the first to include the original notation. Beethoven’s notation is still that controversial after over two hundred years.