I've taken a sample page from Henle's edition of a Mozart Piano Sonata (K.330, 2nd section), and tried to replicate the beaming and slurring in Dorico.

Here's the catch -- my primary aim is to use Dorico's Engraving Options to make global changes that get as close as possible, in order to reduce the manual fine tuning to as little as necessary. So interested in your thoughts.

Here's the Henle page. (It's available on their website as a sample: but I've provided it here 'for the purposes of review, criticism and education', with the addition of a watermark. Hopefully that's OK.) 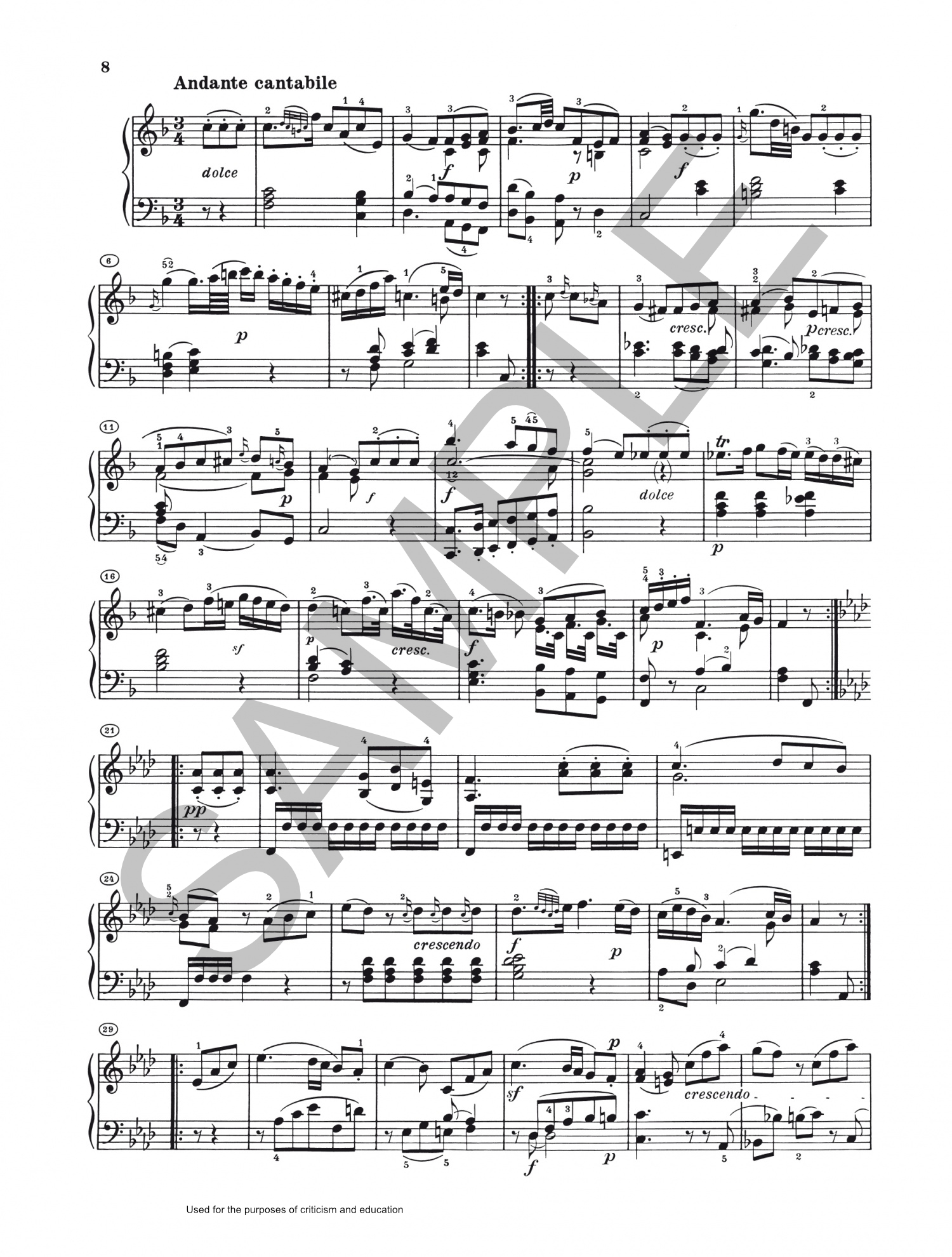 Here's my attempt. Bear in mind that apart from a few egregious examples (mostly the grace notes), all the slurring uses the parameters I've set in Engraving Options, with no manual adjustments. There are no manual changes to the Beaming, except for the beam grouping, e.g. beaming 3 quavers together, splitting the notes of 2nd beat of bar 6, etc. 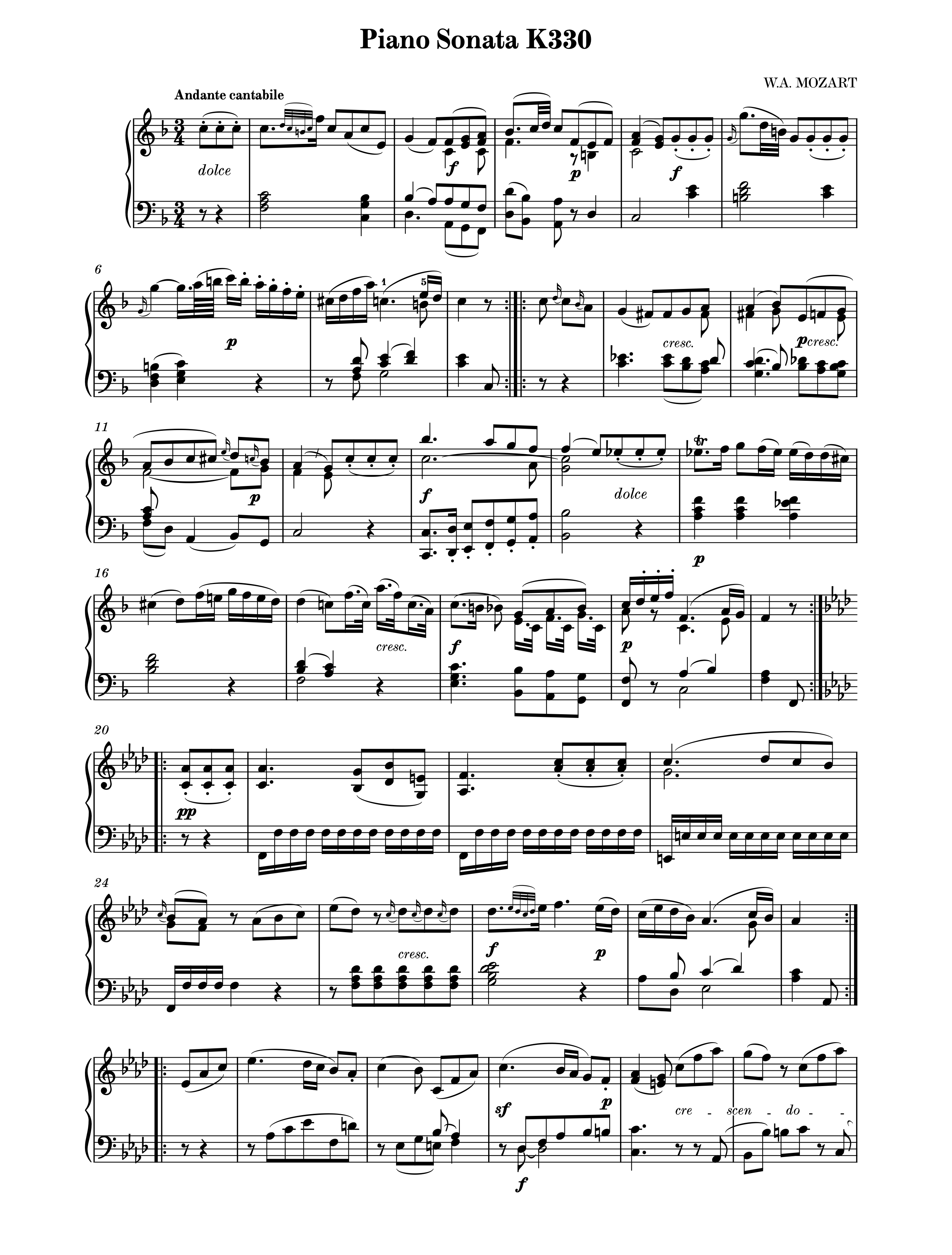 The most obvious manual adjustment that needs to made is 'floating' the left hand end of those slurs in 19 and 27, which can't be done in Options, AFAICT.
Top

What an interesting exercise! I focused mainly on the slurs and beams in the following comments. As you may be suggesting, they do have a strong impact on the overall appearance of engraved music.

1. To me, the most glaring Dorico deficiency are the slurs, which have a strange contour with a long flat middle and the ends suddenly dipping down toward the noteheads. And the belly of the slur is too thin, so the slur doesn't catch the eye. Many have pointed this out since Dorico 1. However, with some changes to the settings, as proposed by Fred G. Unn in a Dorico thread, they can be much better. Yet the ties have a beautiful contour and fullness in Dorico! So strange.

2. And as far as positioning, the Dorico slurs sometimes hug and get lost in the staff lines. Compare the Henle. m . 12, 24

3. There are the kind of deficiencies in the Henle slurs that one sometimes sees in hand engraved music. m. 7 was a real goof on the part of the engraver, caused by the finger number. It should have been corrected. The slurs in the portato indications in m. 12, 14 in the Henle look OK to me, but I usually flatten a slur in a portato indication more than other slurs to make the symbol appear unified.

3. The Dorico font for the expressions is a little too thin for my taste. But one sees this with some publishers.

4. Both follow the rule to place the beams on top of the staff lines, but, at times, Henle allows them to follow the contour of the notes more musically, even when this creates bad angles with the staff lines. The Dorico just follows the rule, which gives a cold, machine-like appearance. ms. 3, 6. 7 etc.

5. The two staves of each grand staff are too far apart from each other in the Dorico. The Henle exemplifies something that I have long believed: the two staves of a grand staff should appear to have been forced apart by what is going on between the staves. That is, there should be minimal breathing room. This keeps the two staves more in contact with each other in a way which makes for better reading. It also makes it possible to put more space between the systems and get more systems on the page when necessary. Note that Henle even shortens the stems of beamed groups to keep the systems close, as in m. 2.

6. To me, the Dorico piano braces are thick and ugly. The Henle braces, with their nice balance of thick and thin, are much better. I like and use Wess' brace, which is even better: 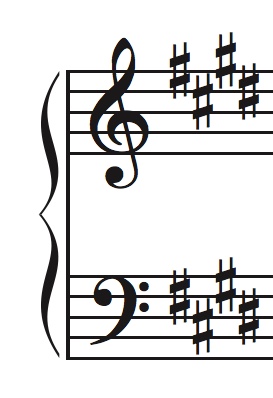 To be fair to Dorico, the music font is Sebastian (including the braces); and the expression font is of my choosing (but yes, probably should have gone with a different weight). I may not have always changed things for the better.

I thought I had taken on board Fred's slurs settings, though they may have got lost in various attempts at a 'house style'.

Yes, I noticed that the staves were a bit closer in the Henle. I hadn't done anything about that. I was only focusing on the beams and slurs at this point.) Dorico pushes stuff away to avoid collisions. So, e.g. b. 27, the stems could 'overlap' vertically.

Just a reminder, that I accept there is still manual work to do: but the quest is to get the best from the Settings as possible first.

I have also done the page in Dorico's Factory settings, which is ... different, certainly!
Top

Here's a revision. I've thickened the slurs' middle, and increased the fraction of the length for the 'shoulders'. Manual adjustments are still to be made. 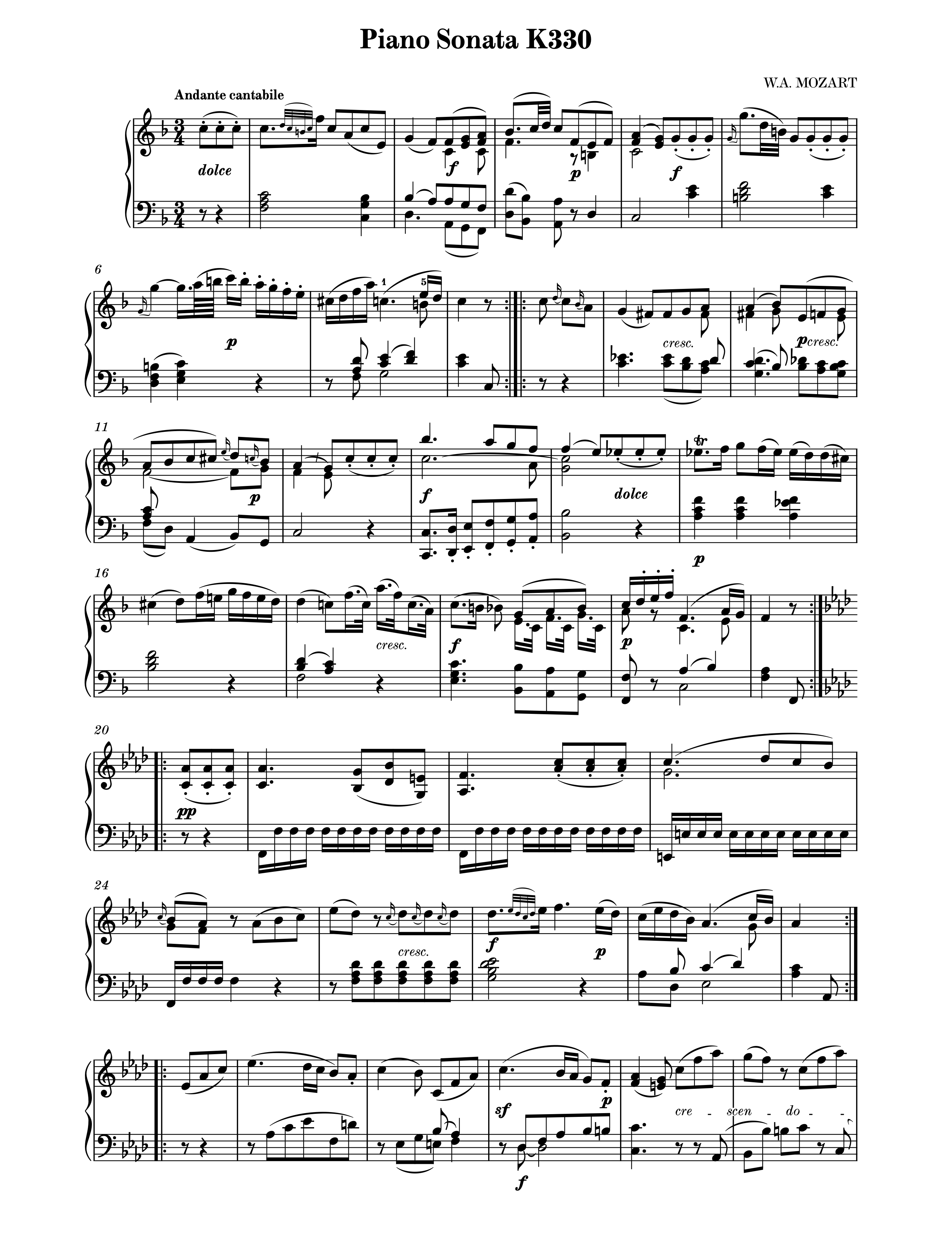 The slurs are now vastly better, Ben, as is the staff spacing. However, the slurs on the stem or beam side such as those in ms. 2-3 are all slightly too arched for my taste. Yet the ones on the note side, like the first one in m. 5 is just right, as are the ones in m. 6, and the first one in m. 7. The one that involves both stem and note sides m. 7 is too flat. I don't understand the discrepancies, if the settings are same for all.

I would have positioned the first finger number in m. 7 lower, and the second higher, but of course in a way to allow the slur to have its natural curvature. The interaction of finger numbers and slurs is a whole subject unto itself actually.

IMO making the piano brace a glyph was a huge mistake and something that would probably force me to design my own glyph and bring it into Dorico unless an existing one could be edited within the program.
Mac mini (OS 10.8.5) with dual monitors, Kurzweil Mark 5 with M-Audio Midisport 2 x 2,
Finale 2014d with GPO 4, JW Plug-ins, SmartScore X Pro, Adobe InDesign CS4,
Inkscape .48.5 and .91, FontForge 20150526
http://www.cantilenapress.com
Top

I have increased the short slur height to 5/8th of a space (from 3/4), which may be one fraction too much.

Yes, there's still work to do, but the exercise is about minimizing what needs to be done! The other question is, of course, whether these settings will work well for other documents.
Top

My experience with Finale was that once the slur settings were right for the majority of cases within one document and style, they worked well for all.
Mac mini (OS 10.8.5) with dual monitors, Kurzweil Mark 5 with M-Audio Midisport 2 x 2,
Finale 2014d with GPO 4, JW Plug-ins, SmartScore X Pro, Adobe InDesign CS4,
Inkscape .48.5 and .91, FontForge 20150526
http://www.cantilenapress.com
Top

This is a great thread and I'm really curious what settings some others are using!


John Ruggero wrote: ↑
02 Oct 2021, 15:55
IMO making the piano brace a glyph was a huge mistake and something that would probably force me to design my own glyph and bring it into Dorico unless an existing one could be edited within the program.

For me one issue with the Dorico brace is that the default setting is so close to the barline. My proofreading eye is naturally drawn to collisions and I keep glancing over at it thinking they are touching. I think the eye is incorporating a bit more weight due to the proximity of the barline.

Moved out a bit so there's a touch of white space it's still not as elegant as the Wess brace, but doesn't quite seem as abnormally heavy to me. 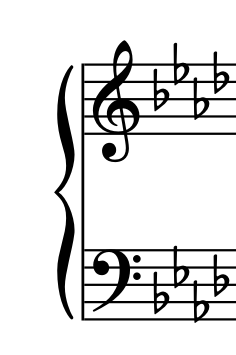 I actually tried to spend some time tweaking my beam settings a couple of weeks ago. I tried to copy pages 104 and 105 of the Ross book to start by getting some good settings for two notes, but ended up quite frustrated.

Here's as close as I could get just by using Engraving Options and no manual tweaking: 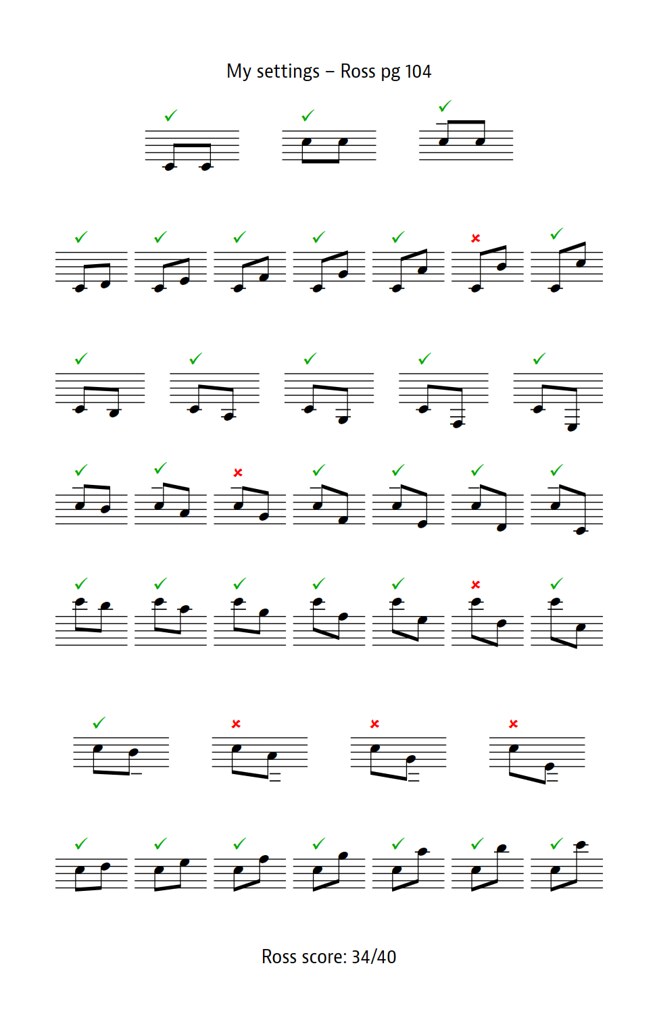 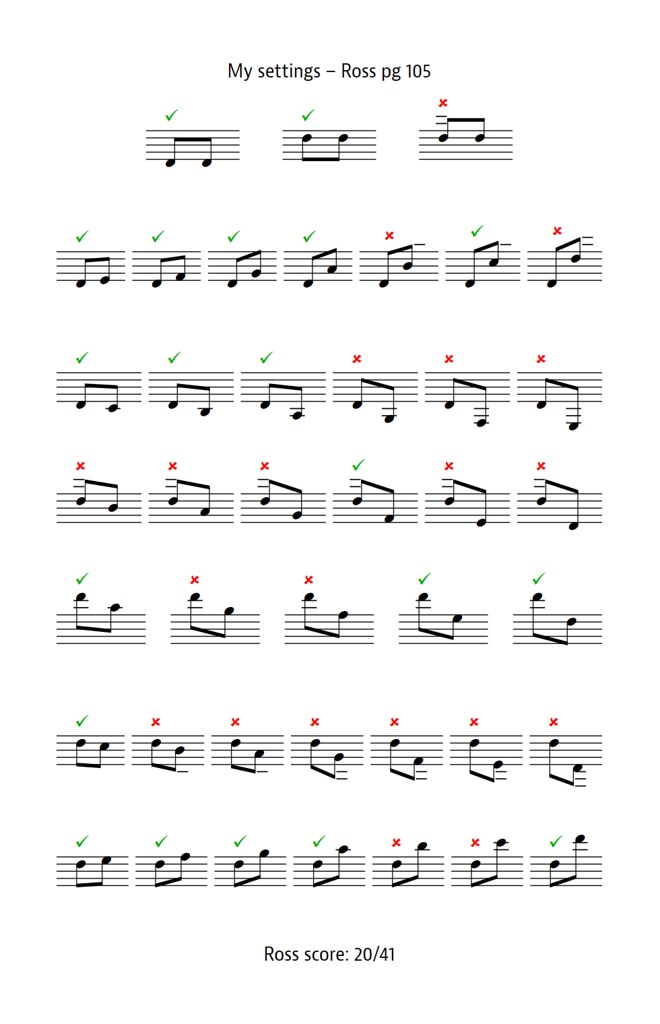 I scored 54/81. Not awful, but certainly not great either. The 3 I missed on pg 105 system 3 are particularly terrible IMO.

Here are the Dorico defaults: 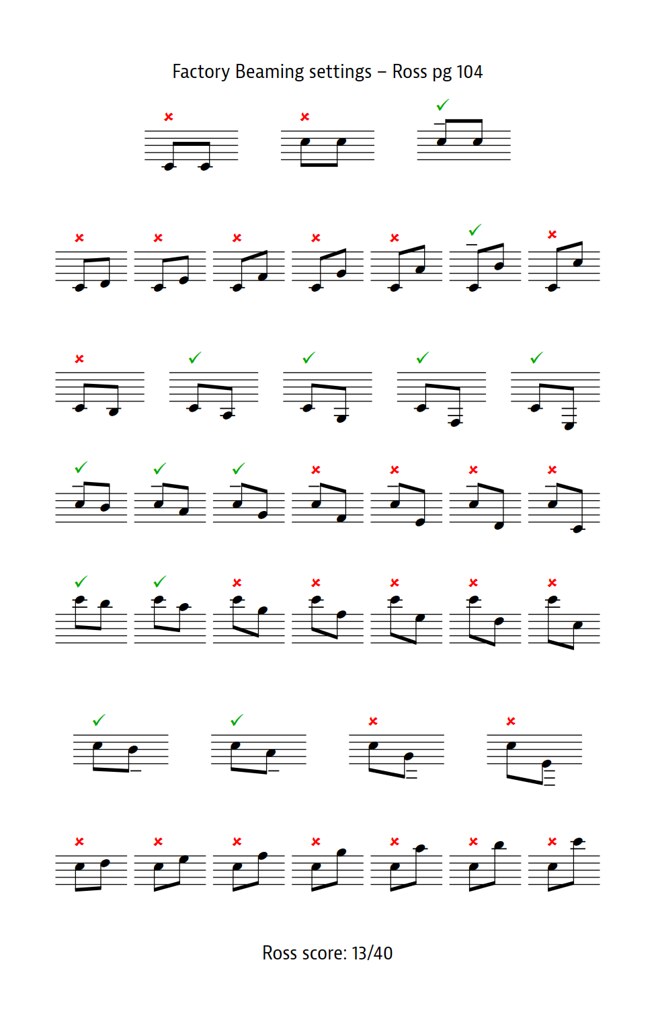 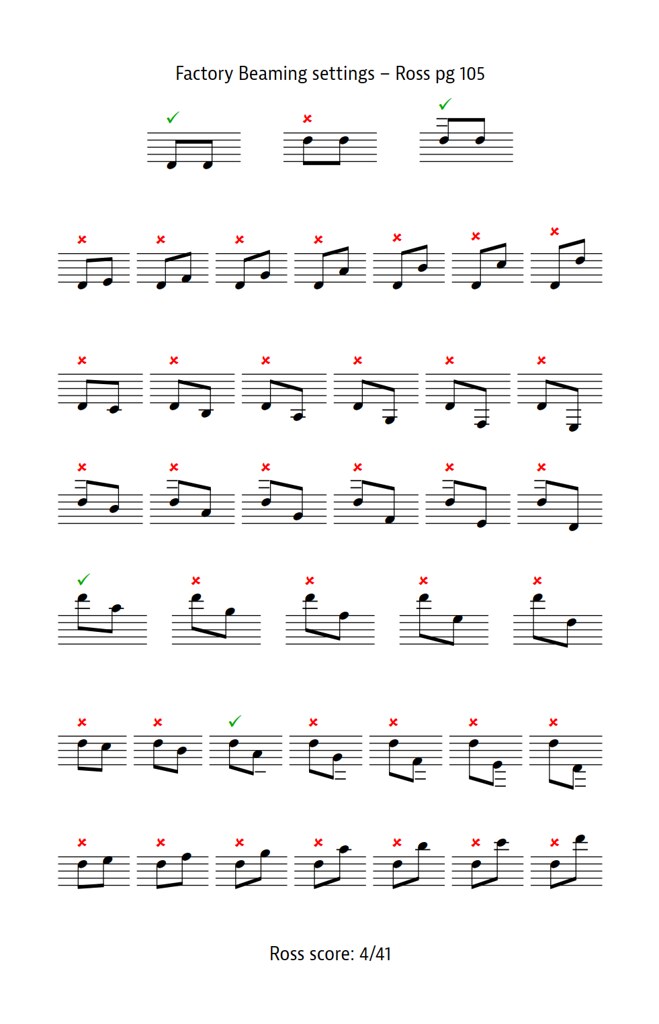 One of the issues with Dorico's beaming is that there is some sort of bugginess with the effect of ledger lines on the "narrow beams" setting. I reported this and there was a confirmed issue, but I haven't really been able to figure out how (or if it's possible) to account for this by tweaking other settings.

Has anyone else tried a similar test? Could you get closer without any manual adjustments?
Top

Ben, did you tweak any of the grace note slurs where there's a single note in your K330 example? Or are those your defaults? I'm getting much worse results than you with my default grace note slurs so was just wondering if there was some setting I was missing.
Top
Post Reply
41 posts