Apropos of nothing, here's a table of Finale release dates and number of days between releases. This update comes 274 days after the previous one, which is significantly longer than any other recent update. 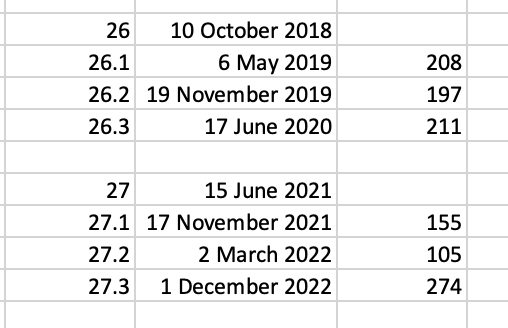 I so much need to get back to using Finale as well ... 15 years after last time ... it's like a primal calling! :-D
Artistic Score Engraving — music preparation services
Metagrid Viewset for Sibelius
Top

I don't recall all the news in earler updates, so I can't really compare them with those in the latest one. But surely it's a significant improvement that Jari's plug-ins finally are included in Finale. Nice, although somewhat belated, gesture!
Finale 26, 27 on Windows 10
Top

Anders Hedelin wrote: ↑02 Dec 2022, 13:14 But surely it's a significant improvement that Jari's plug-ins finally are included in Finale.

Well, it means that those who didn't know about the plug-ins get the benefit. To those who already use the plug-ins, it's "business as usual". Though by taking in the development in-house, the future of the plug-ins is more secure, as Jari has not been working on them for some years. (Apple Silicon versions are welcome.)

Other than that, there are some desirable fixes and improvements: mostly "no longer crashes", and "now works".

Actually: the improvement to Linked parts is pretty significant. It's basically completed the implementation from 2007.

But: for the length of time they spent, it's a bit underwhelming. Compare to the number, size and scope of features and fixes in Dorico in the same period.

Speaking of plug-ins: Patterson Beams has been in Finale for 20 years or more, and is essential for anyone who wants 'pro' beams. In all that time, could they not have incorporated it into the program's core drawing routines?
Top
Post Reply
5 posts • Page 1 of 1