Internal evidence and op. 2 no. 1 continued

Internal evidence and op. 2 no. 1 continued

When I wrote previously regarding the missing staccato dot for the opening note of Beethoven's piano sonata op. 2 no. 1 I was not aware of the two existing sketches for this movement. I think that these sketches lend more support to my argument that Beethoven did not intend the first note to be staccato.

In the first sketch, which was presented and discussed by Gustav Nottebohm, (the first person to deal seriously with Beethoven's sketches) the opening upbeat is missing. Beethoven originally thought of the opening motive as consisting of five notes only, running up the F minor triad from F to A flat. This explains the missing upbeat to the second statement of the motive in ms. 3-4. The upbeats written as small notes before ms. 5-7 leading to the climactic C are all present. 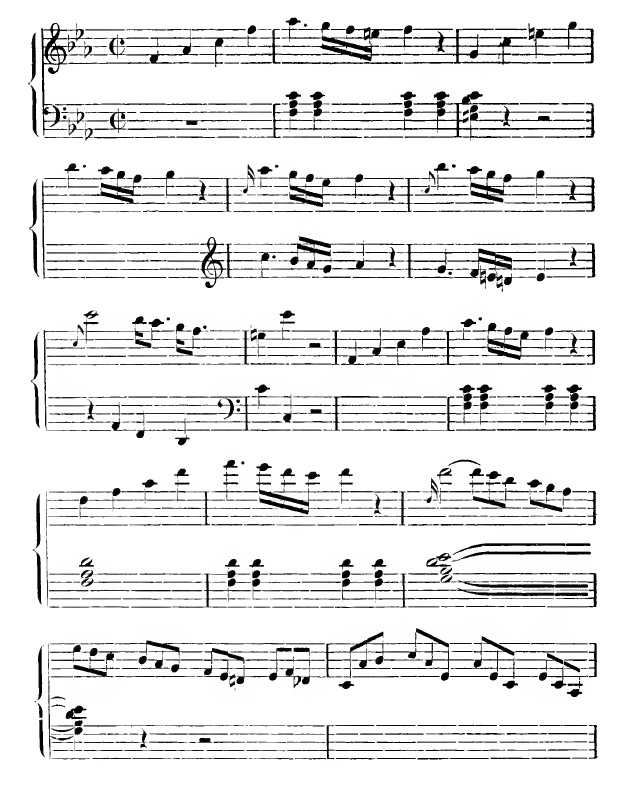 This sketch supports my contention that the arpeggiated chord in m. 7 in the final version is simply a filled-in octave, and should be started before the beat like the preceding small notes. The before-the-beat interpretation for all of these small notes is supported by the way in which m. 8 is engraved later in the piece as m. 108. As another example of Beethoven's progressive correction, Beethoven wanted this inverted turn played before the beat, but also knew that many performers would play it on the beat, and eventually settled on a way to clarify the interpretation. He puts the small notes before the bar line in m. 108 and expected the engravers to correct m. 8. As usual, they don't, leaving the two conflicting versions. Unfortunately, later editions make the later statement conform to the first.

The now famous initial upbeat was finally added in the second sketch, which is quite close to the final version. This kind of change is typical of Beethoven's thought process and working style. Often the details are cloudy in his mind and only gradually come into focus. He suddenly realizes that the upbeats in ms. 5-7 need a precedent. Who would have guessed that the opening note which seems to generate so much of this movement was not even part of his original inspiration!

However, what is still missing in the second sketch is the extended and very dramatic transition section (ms. 93-99) into the recapitulation that is based on the opening note. Somewhere between this sketch and the final draft, it was added as a logical response to the addition of the opening upbeat. Only when that note was added was the stage set to replace a perfunctory transition section in the second sketch with a brilliant replacement. (The second sketch is available in the article A Little-known Beethoven Sketch in Moscow by Boris Schwarz The Musical Quarterly vol. 56 no. 4.)

The internal evidence of these two sketches suggests, then, that the opening note is something separate from the five notes that follow, much like small leaping notes in ms. 5-7 are something different from the notes they decorate. As something apart, it deserves its own special articulation, something to resemble the slurred leaping notes that follow. But slurring to the following note is not a solution, because the upbeat does not lead to the F as a goal but to the entire five note motive that follows with the final A flat as the ultimate goal.
Mac mini (OS 10.8.5) with dual monitors, Kurzweil Mark 5 with M-Audio Midisport 2 x 2,
Finale 2014d with GPO 4, JW Plug-ins, SmartScore X Pro, Adobe InDesign CS4,
Inkscape .48.5 and .91, FontForge 20150526
http://www.cantilenapress.com
Top

Re: Internal evidence and op. 2 no. 1 continued

Murray Perahia plays a non-staccato upbeat in his performance of the Sonata op. 2 no. 1:

Another example of a non-staccato upbeat: the last movement of Beethoven's Sonata op. 2 no. 3:

Re: Internal evidence and op. 2 no. 1 continued

Additonal evidence for the long pickup occurs later in the fourth movement of op. 2 no. 3. Here the pickup note, which is clearly related to the opening piclup is trilled, thus lengthening it:

The theme of this movement is quite like the opening of op. 2 no. 1 in that the pickup has a kind of self-sufficiency and is followed by staccato notes. In the following example the pickup is actually detached from the staccato notes and placed two octaves higher to avoid direct repetition of the following note!