Chord name positioning seems to really be an interesting topic with different possibilities. Dorico seems to default centering for example.

But look at this example from Dave Brubecks "Time Out & Time Further Out" (Songbook for 2 albums, 1962) – left-alignment with alignment to accidentials if present: 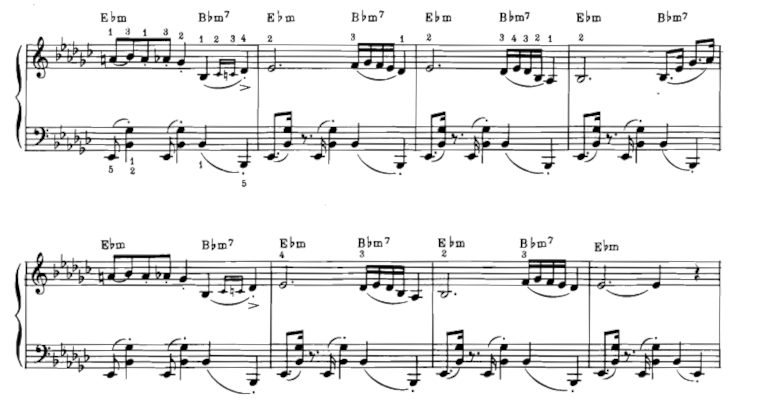 What I like here better than in John Ruggeros "Falling In Love With Love" example is that the chords are close but not as close to the staff which makes for better readability.
Top

Even the original (illegal) Real Book was mostly left aligned: 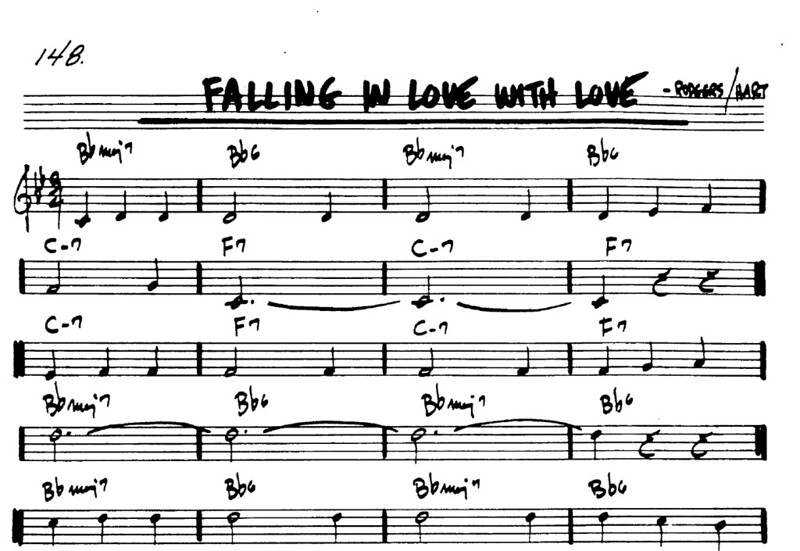 The Shur New Real Book series is probably the standard most jazz musicians are accustomed to. They are all left-aligned except for where horizontal space doesn't allow, and then they will sometimes move the chord to the left. 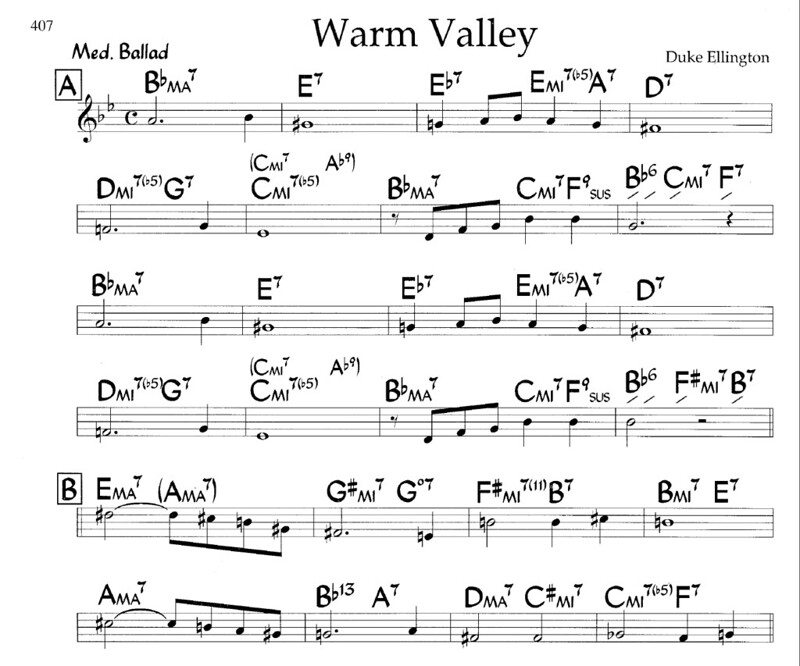 I just had 3 nonet arrangements of Lee Morgan tunes premiered on Thursday. Here's a snippet of the piano part to my arrangement of Lee's "Stop Start." Tempo is quarter = 224 (and we took it faster on the gig, LOL) If I had used centered chord symbols, there's no way these hits would have been clean. 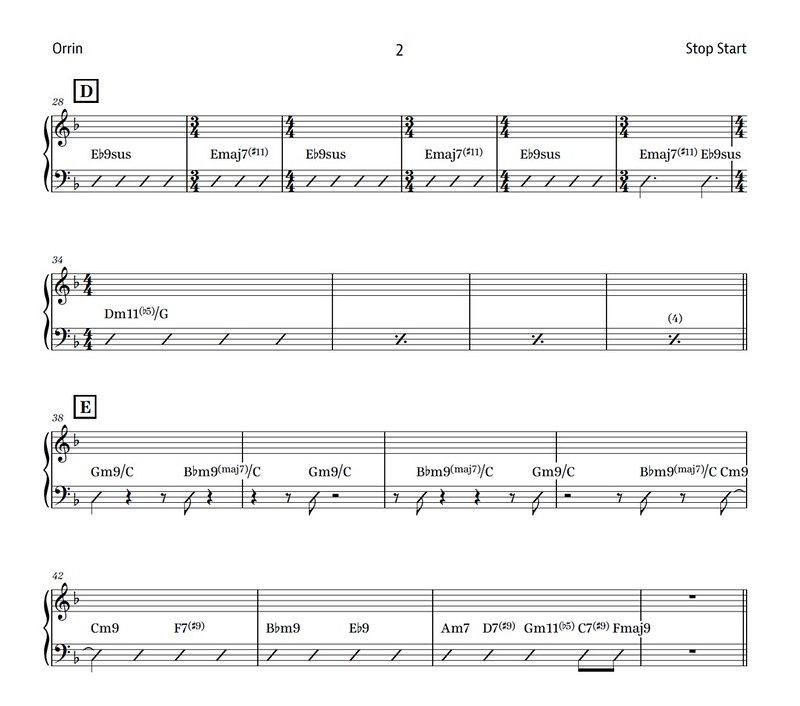 If you do not have much space use two colors

Lead sheet handwritten by Thelonious Monk with melody on staff in blue and chords squeezed in between in black with slashed quarter rhythm for orientation as there is not much alignment at all: 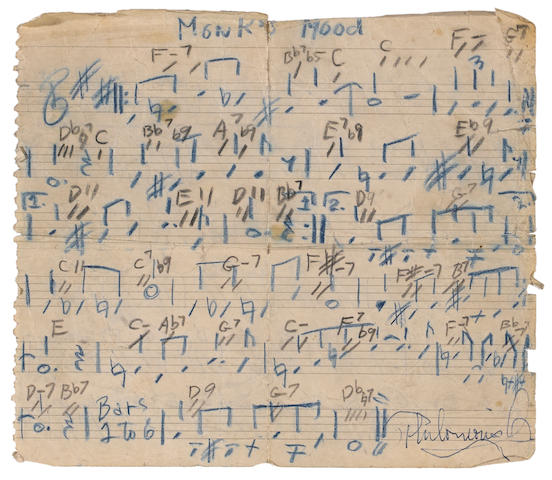 This is a fascinating find, thanks for posting! Do you know anything more about the context or for what recording session or gig he wrote this out? It's pretty interesting because it's a Bb part with concert changes. There are quite a few musicians that always wanted transposed parts with concert changes (Dizzy Gillespie, Joe Henderson, etc), but I wasn't specifically aware of one of Monk's tenor or trumpet players wanting that. It also is too low to be a tenor part (the A's are off the horn) although Trane, Rouse, or someone could have easily read it up an octave.

It's also interesting that Monk thought of those chords in the 1st ending as 11th chords. I guess I always thought it was Am7/D - Bm7/E there or D7sus - E7sus. I always played Dm7-5 instead of Fm in the third bar too, as well as Am7-5 instead of Cm in the 5th bar of the bridge. I know Dizzy always thought of m7-5 chords as m6 chords with the 6th in the bass (so Am7-5 was Cm6/A) so it's not completely a surprise Monk would maybe be thinking along similar lines.

There are actually 3 different pens or pencils used here as the one he used to sign his name is different. I wonder if he wrote out the melody (in blue) and then he or someone else added the changes later. Interesting little scrap of history!

EDIT: I just went back and listened to the 1947 Blue Note version, the 1957 live at Carnegie Hall, and 1959 Town Hall versions. The bass player is playing a D in the third bar in each version, so that chord is really Fm/D or what we would now call Dm7-5.
Top

Did they use slashes to show bass notes back then? I thought that notation was more recent and don't see any in Monk's Mood. Maybe that explains the D11?

Most of the chord symbols are centered in John Mehegan's multivolume jazz improvisation course. A few more examples are shown below.

A guess at what happened: Many of the earlier engravers (but not all) centered the chord symbols as we do articulations and chord analysis numbers because it looks good and the lack of complexity made it possible. With increasing complexity, engravers were forced to left justify the ones that wouldn't center easily and finally opted for consistency and began to left justify them all.

In hand copying, the symbols were always placed much more casually. I give an example from one of my father's personal fake cards below.

@ Fred G. Unn: I have no other context than it was mentioned somewhere in a blog or forum that there were Monk manuscripts on eBay IIRC so I downloaded the images. Until you mentioned it I had not even realized that it was written for a transposing instrument :-D

D11 i s Am7 over D (third omitted) or better C6 over D in the thinking of the old boppers. They were thinking everything as sixth chords. That is why what makes the Barry Harris Method so easy while it goes way beyond the superficial look at the so called sixth diminished scales in recent years:

This is (part of) Barry Harris’ methodology in a nutshell (I hope it does not go too far beyond the scope of this forum) which was a real eye opener for me. Take a II-V progression in minor, e.g. Dm7/b5-G7 (for C minor). Now instead of thinking complicated Greek names (introduced into Jazz by George Russel’s "Lydian Chromatic Concept") like playing Locrian over a Dø think "Fm6 with the sixth in the bass" and play in F minor over that chord (like arpeggios: Fm triad, Fm add9, Fm6, Fm6/9) and over G7 just play the same thing or something similar a minor third above (see above: G7alt = Abm6 over G7). I decoded Dizzy's weird intro to Monk's "’Round Midnight" recently after having read an interview with Diz where he talks about having started using "minor chords with the six in the bass" and his exchange of ideas with Bird and Monk. That intro is a sequence of minor II-Vs going down in whole-tone steps and that complicated sounding melody is nothing more than what I have described before. It is very easy once you get the hang of it

What you have proved through listening as you described in your edit: The bass player knew he had to play the "sixth in the bass", even if that bass note is not notated like in the handwritten lead sheet. You can see the same thing in many Tune-Dex-Card based fake books or in original sheet music: Fm or Fm6 going to G7 instead of Dm7/b5.
Top

@ John Ruggero: The slashes in Monk's lead sheet don't show "something over something", (bass note or polychord) but rhythm shorthand: one slash stands for one quarter beat – same thing as in Fred G. Unn’s Lee Morgan example above. In the first bar of "Monk's Mood" the Fm7 (notated with a "minus") lasts 2 beats, then Bb7/b5 for one beat and C [C6] on the 4 etc. Its those slashes written below the chord names. There are (rhythm) slashes below the 11th chords as well in the 1a volta repeat.

I guess they did write the chords in the simplest way possible back then as they knew how to interpret it – like e.g. the "minor with the sixth in the bass".

Here another Monk manuscript with the chords written below the melody 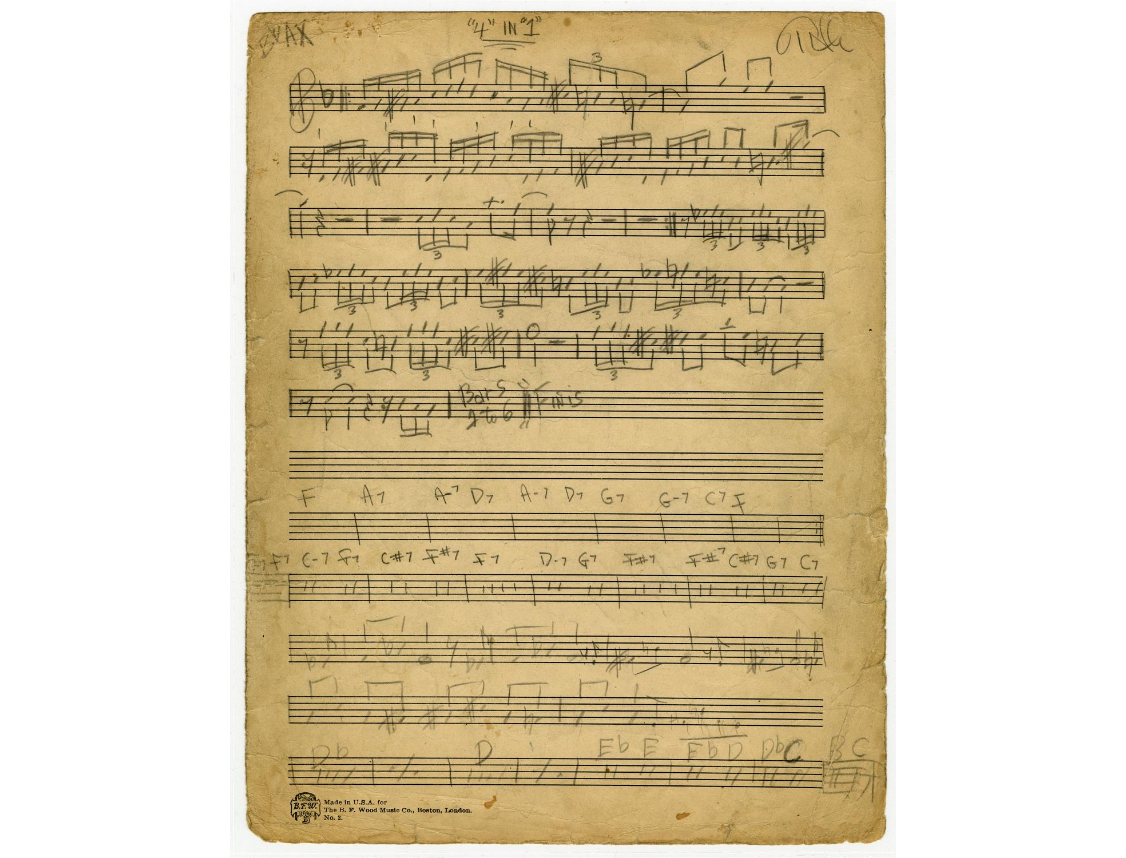 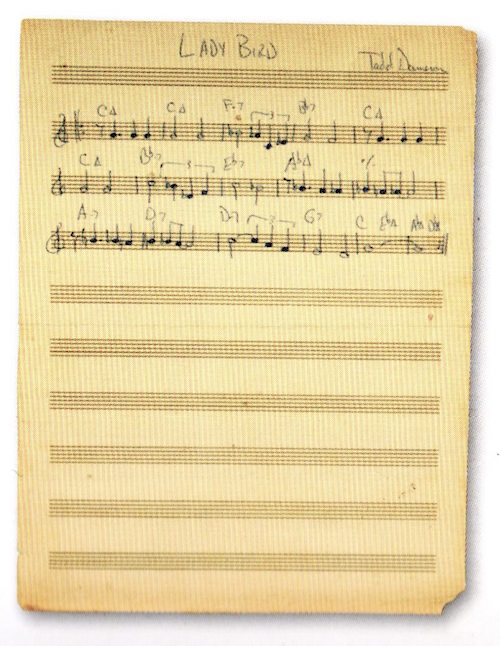 In "Monk's Mood" Thelonious used a natural sign in front of the 7, e.g. D♭♮7 in the last bar.
Top 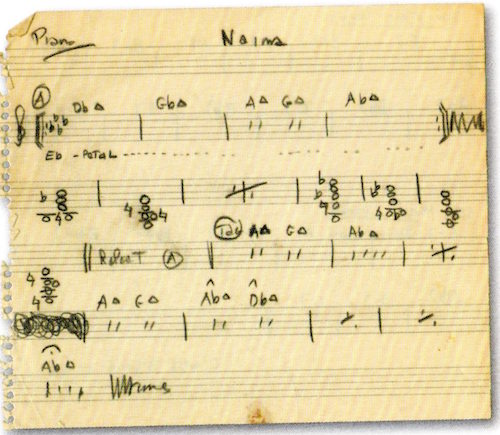