According to Elaine Gould, "The ends of the slur may be placed as close as half a stave-space from the center of noteheads..." (p. 110)
According to Ted Ross, "Long slurs always start and end over or under the center of a notehead." (p. 141)

Neither addresses the positioning of short slurs, particularly steep ones.

Finale centers all slurs as at A:

The hand engravers, however, positioned steep slurs as at B, that is, shifting them a half a notehead to the right or left and in some cases a little closer, because of the improved look. The shift starts in the second measure of B. Were the spacing tighter, it might have started earlier with fourths rather than with sixths.

Here is an example from the Cortot edition of Chopin's Etude op. 25 no. 5:

Given the simplicity of the change, one would think that this is something that software could take care of automatically.

Here is an example from the same piece comparing "corrected" slurs in the first measure to default slurs with my settings in the second measure:

I think we've discussed similar things before**, and the suggestion was made to 'reduce the angle' -- e.g. leave the slur end on the inner note floating a bit.

It may be entirely personal preference, but I find the 'verticality' of the last bar of A and B to be difficult to look at.

In your Chopin example, I don't know whether it's an optical effect, but the slurs in 2nd bar look like they're too far left, even if they're centred. The 1st bar looks more balanced.

In the thread about my Dorico slur options, I chose to start and end slurs a tiny bit 'outside' the central point of the notehead, for exactly this reason. But you're right that software should accommodate this.

I never did really figure out the logic behind the Dorico illustration for beam angle:

I know we discussed it on that thread, but none of the results make much sense to me with the values given. The illustration is just wrong I guess, and you said you thought it was the "avoid" angle, but I'm still not quite conceiving of what the angle on the diagram should look like here. How would you draw the angle on the diagram to reflect what Dorico is actually doing?
Top

Only if absolutely necessary and as little as possible, in my opinion. With some editions it seems to be an easy answer to every difficult steep slur. For example the end points of the Dorico slur in the example directly above are way too far from the noteheads for my taste, causing the slur to dissociate from the notes.


benwiggy wrote: ↑
14 Mar 2022, 16:09
In your Chopin example, I don't know whether it's an optical effect, but the slurs in 2nd bar look like they're too far left, even if they're centered. The 1st bar looks more balanced.

That indeed is the optical effect of centered slurs over large intervals with tight spacing. They not only look bad, but don't even appear centered.


benwiggy wrote: ↑
14 Mar 2022, 16:09
In the thread about my Dorico slur options, I chose to start and end slurs a tiny bit 'outside' the central point of the notehead, for exactly this reason. But you're right that software should accommodate this.

I've noticed that engravers have different takes on this problem when dealing with two-note slurs as in the examples above. Some do what you just described. Some center the slur over the first notehead but pull the slur over to the outside of the second notehead. Others simply move the entire slur over without any change in the shape it would have had if it had been centered as I did in B in my first example. This works amazingly well in most cases and is what the software could be doing since the size of the shift seems to depend entirely on the spacing. As the spacing widens, all the problems disappear.

For example, here is the Dorico example above in a very wide spacing with an unadjusted Finale slur with my settings. (The Finale default has the same shape but the famous indefinite tips.) Then the spacing is compressed and the problems appear. I adjusted it by first moving the ends to point to the outside of the noteheads. Then I lifted the ends only enough to provide enough clearance to reshape the curves slightly into more graceful curves. The top of the slur remains at the same height above the slur throughout.

Looking across your A and B examples, as the slurs become increasingly vertical, they seem to lose their purpose, which is, after all, describing a horizontal connection between the notes.

Whether centred beaming would be the best fix, I don't know. (A somewhat belated reply.)
Top

benwiggy wrote: ↑
10 Jun 2022, 08:28
Looking across your A and B examples, as the slurs become increasingly vertical, they seem to lose their purpose, which is, after all, describing a horizontal connection between the notes.

That is a good description of what happens with very large intervals, although I'm not sure that I agree with "lose their purpose". There is also the solution to place one or both of the ends of the slurs far from the notes to decrease the curvature for very large intervals. Centered beaming accomplishes that best since the ends of the slurs can be close to the note heads and beam.

However, I am more concerned about intervals in the mid-range as in the second measure of the original example. I find the adjustment at B more attractive, what one sees in good hand engraving and something that software should be doing. Perhaps something to bring up at Dorico.
Mac mini (OS 10.8.5) with dual monitors, Kurzweil Mark 5 with M-Audio Midisport 2 x 2,
Finale 2014d with GPO 4, JW Plug-ins, SmartScore X Pro, Adobe InDesign CS4,
Inkscape .48.5 and .91, FontForge 20150526
http://www.cantilenapress.com
Top

from a completely ignorant engraver who relies on you guys for proper engraving, a comment/question: could it be that the Chopin example above is shifted slightly to the right because of the dotted values?

maybe a published sample of non-dotted values might be more appropriate?
Top

Sure, non-dotted coming right up from the same piece. Note how the slurs are shifted the most for the larger intervals and not much or at all for the smaller ones. From the Mikuli edition published by Schirmer. Of course, there is some inconsistency of the type that one always sees in hand engraving. 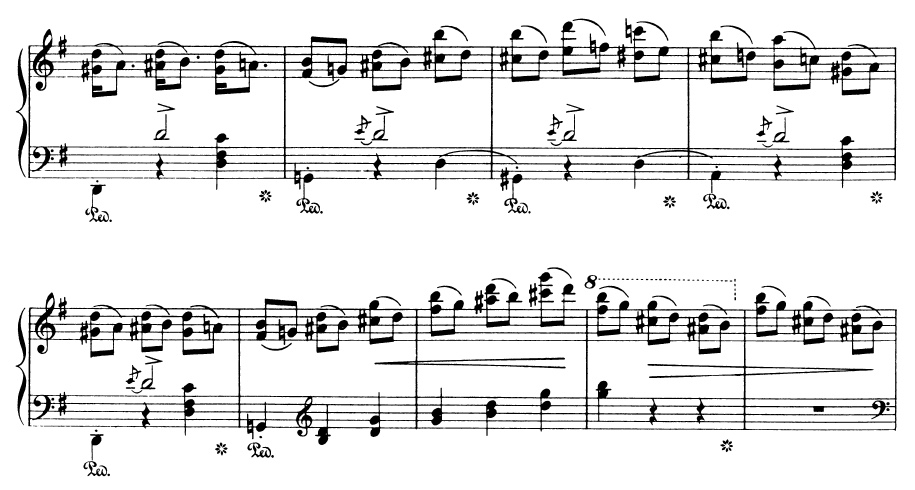