Many years ago, Heinrich Schenker showed why it is a blunder to rewrite passages in older piano music to take advantage of the later increased range of the instrument. A composer takes range into account when a piece is conceived and uses any constraints imposed as a creative incentive. As well, the compass of a piece of music is like a painter’s canvas in that it defines the events that take place within its borders. Adding notes beyond the range would be like patching on some extra canvas here and there to complete something in the painting that the artist had intentionally left running off the frame of the picture.

For example, Chopin’s Etude op. 10 no. 1 is all about the outermost notes on his keyboard, low C and high F, which he references throughout the piece. These two notes were clearly symbolic for Chopin throughout his creative life as a kind of alpha and omega of his musical universe. Yet at one point, he is seems in need of the higher F sharp and G, which causes him to write the ending somewhat differently than if he had had these notes. This creates a new pattern that he carries on in the next two measures where there is no range constraint and this even influences what follows at *. Somehow the constraint has made these final moments more poignant and this is shown by his hairpins of emphasis. This would all be lost if the passage were modernized, and to my knowledge no one ever has, fortunately: 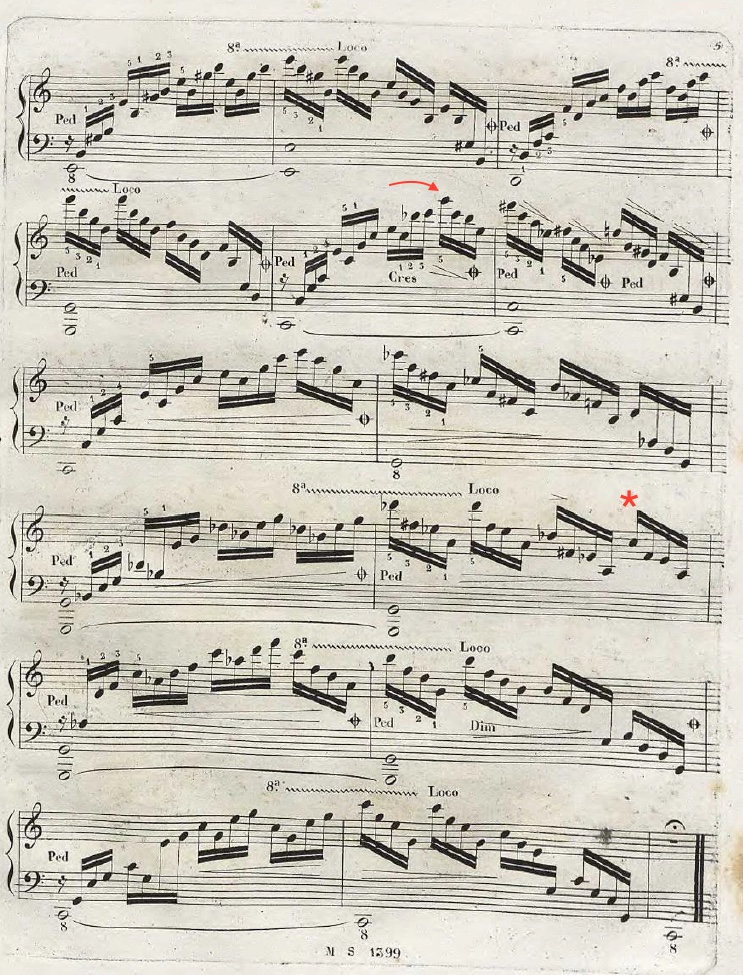 Schenker probably would have said that the strong use of a high G as a destination tone would have sounded out of place since the basic melodic outline of the piece only goes to the high F as a significant tone.

However, there are a few cases in Beethoven’s piano sonatas where the composer seems in sore need of an extra note and practically begs the performer to add it, and perhaps counts on continued improvement on piano technology to make this possible. For example, in the first movement of the Sonata op. 10 no. 1 the higher octave supporting the G flat neighboring tone almost certainly should be supplied since doing so does no violence to the musical conception and makes the passage more complete:

Yet in what seems to be a similar case, with the missing octaves at ** in the Sonata op. 14 no. 1, the situation is actually quite different.: 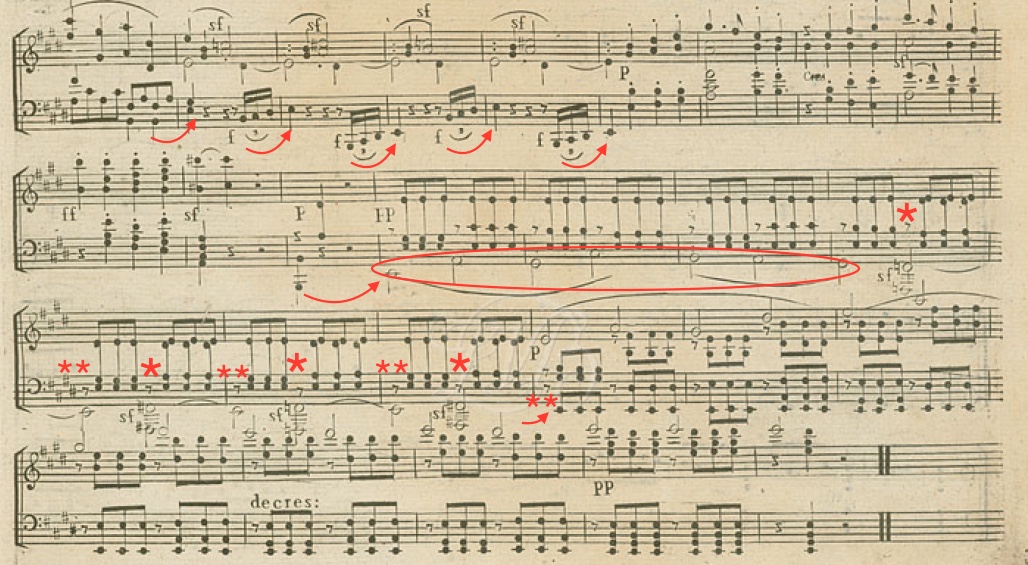 Here, I believe that the low E's should not be added at ** because the real lowest E of the piece is so structurally significant. In particular, the sliding motion from the dominant B up to the E shown by the arrows:

Beethoven is only adding the reinforcement in octaves at * to help the sf effect, not to gain a lower structural position. Notice that he doesn’t add octaves to the bass part (in the oval) until the sf, even thought it would have been possible for all but one of the notes. To me, to encounter an even lower E coming out of nowhere would “steal the thunder” of the droning Bass E’s in the coda that follows immediately and kill the poetic ending.
Mac mini (OS 10.8.5) with dual monitors, Kurzweil Mark 5 with M-Audio Midisport 2 x 2,
Finale 2014d with GPO 4, JW Plug-ins, SmartScore X Pro, Adobe InDesign CS4,
Inkscape .48.5 and .91, FontForge 20150526
http://www.cantilenapress.com
Top
Post Reply
1 post • Page 1 of 1