In the Baroque and Classical styles, articulation was a primary means of expression and this music comes to life when players use a great variety in the lengths of notes and degrees of silence between tones. One of the reasons that Bach et al didn't write in many markings was that the articulation used at that time was so complex that it was impossible to notate. This art was forgotten for a very long time until 20th century musicians like Rosalyn Tureck and Glenn Gould and many others, restored this important aspect of this music. Gould's used of imaginative articulation was what got him so much attention, even if he sometimes carried it to crazy lengths. Tureck, I believe, said that she had a sudden epiphany when she realized that the legato style of Bach playing then in vogue was completely wrong for the music. I myself cannot abide Bach playing that does not reflect the reports of Bach's own playing: "He sounded like he had rhythm in every bone of his body." This kind of rhythmic vitality can only be conveyed by very imaginative use of articulation.

The Romantic style was highly influenced by Romantic opera and saw a great reduction in the variety of articulation, with legato largely holding sway. Musicians brought up in the Romantic style might even try to apply this approach to earlier music, with unfortunate results. Later music has to some extent restored the balance, but in my opinion no later style has ever equaled what was accomplished during these earlier times. Only jazz has retained this kind of variety and I think that it is one reason why some jazz players have admired Bach's music.
Last edited by John Ruggero on 25 Oct 2017, 11:27, edited 1 time in total.
Mac mini (OS 10.8.5) with dual monitors, Kurzweil Mark 5 with M-Audio Midisport 2 x 2,
Finale 2014d with GPO 4, JW Plug-ins, SmartScore X Pro, Adobe InDesign CS4,
Inkscape .48.5 and .91, FontForge 20150526
http://www.cantilenapress.com
Top

I agree with you and have long complained of ill-defined articulation. As long ago as my adolescence (1950s) I complained that in a certain style of orchestral playing then prevalent all these (see screenshot) were likely to sound near enough the same, at least on tutti strings, but that I believed that they should each sound clearly distinct.

I'm not sure John that I'm with you on the influence of 19th century opera. Singers sound consonants, as I try to remind cellists playing the Casals arrangement of Fauré's Après un rêve. I tell them that it is not an extended melisma, but they still prefer to go for unbroken legato. I listened the other day to the 1947 Toscanini recording of Verdi's Otello. It is full of clear articulation, and given that Toscanini was a cellist in the first performance of this opera in 1887…

Thanks, David. I just meant that the big folk-like legato melodies of 19th century opera had a tremendous effect on musical style. And of course, good musicians have always used clear declamation in all styles.

Here is a way that one might actually play the first few measures of the third movement of Beethoven's Sonata op 13, showing how many notes would be shortened, some marked with staccato and legato indications and some not. Note that some notes are actually lengthened by common agreement among musicians of that time.

Here are a couple of examples from Beethoven's Sonata op 7. Beethoven would not have used all of these tenuto markings if players of that time routinely held notes full value: 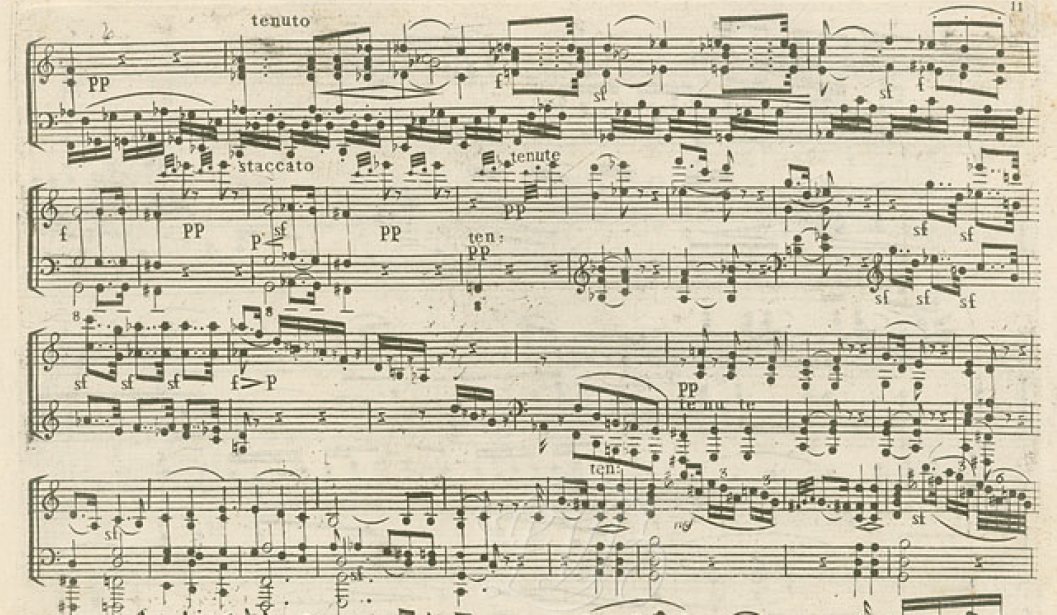 I just listened to a variety of recordings of the passage, and with the exception of Wilhelm Kempff, all of them seemed to hold the long r.h. notes in the second and fourth measures by their full value. The shorter notes seemed to vary more, but, in my estimation, only due to variations in tempo, and the more recent recordings seemed to stress the full duration a bit more than the older ones.

I'm wondering when the tenuto developed into it's current duality of duration and emphasis? I also think it's curious that many less authoritative sources still, primarily or solely, focuses on the durational aspect, even though this does not reflect current practice.
Top

When I was a young piano student, decades ago, I really wondered what was the point of a tenuto dash. If all notes were to be played to their full length by default anyway, what does one need a tenuto mark for? No one could give me a really satisfactory answer back then.

Only later I came to understand that the manner of playing all notes to their full length by default is not what was done in the earlier centuries. The default manner back then was in fact to play notes not to their full length, unless there is an explicit marking to the contrary (e.g. a legato slur). And this had been so at least ever since legato slurs came into use (which happened during the Baroque period). Further, it is my understanding that even during the 19th century, unmarked notes were not supposed to be played to their full value, unless legato execution was marked or otherwise expected - which indeed started to be more and more the case by the end of the 19th century.

But the rule that all unmarked notes should get their full value by default is really a 20th-century idea, born out of the anti-romantic, neo-classistic movement that wanted to eschew the Romantic idea of performer-centric interpretation, and return to the music "precisely as the composers wrote it" - which is, as we know by now through the advances of historical performance research, not at all how pre-20th century composers expected their music to be read.

Fortunately more and more performers today understand that the "full value" paradigm does not apply to pre-20th century music. However, that paradigm certainly should apply to much of the music of the 20th century, and most present-day composers still expect that to be the case. Unfortunately, the waters around this matter are now seriously getting muddied by performers often not knowing any more whether a composer expects the modernistic (full value) or the classical (shortened) way of interpreting unmarked notes!

Getting back to the tenuto dash: I find it quite useful as a mild accent sign, and I use it as such both as a performer (when marking my own scores) and as a composer. This meaning is quite accepted today, and you cannot really expect performers not to interpret it that way.

Moreover, it is generally accepted that if there are several successive notes with tenuto dashes, they are to be played slightly separated (non legato). What else could it possibly be - if you wanted the notes connected instead, you would write a legato slur! (Or at least, a combination of dashes and slur.) The logical consequence of this is that a tenuto dash does not always mean to "hold the note for its full value".

There is a need, though, for a marking which tells a performer to hold a note to its full value regardless of the possible interpretations of a tenuto dash. And there is a solution to this, other than adding extra tied notes. Namely, when I (as a composer) want a note explicitly held to its full value (also without an implied accent), I do not use the tenuto dash, but I write ten. above the note. So far, this marking has never failed to be interpreted the way I meant it.
Top

Thanks for sharing this, Ere!

I've seen big band composers write to, followed by the beat number, to instruct players to hold a note full length. This seems a bit cumbersome to me, but seems to work in a jazz context. In principal, I don't find your solution ideal either, for obvious reasons, but it makes sense why the instruction ten. would be interpreted according to the actual meaning of the word, while a symbol is more vulnerable to semantic changes.

I'm wondering whether there is a sufficient overlap in meaning between the tenuto accent and Schoenberg's stress symbol to warrant using the latter instead of the tenuto to indicate a slight accent. At least on the piano this would make sense to me, but could be problematic on instruments capable of controlling the attack and dynamic level more independently.
Top

Even more common in a jazz context is a simple notation such as "-3," "-4.5," etc. to mean "off on 3" or "off on 4.5." I'll often make those indications myself in pencil after hearing how the lead player is playing it, or if we come to some sort of phrasing agreement as a section.
Top

Even more common in a jazz context is a simple notation such as "-3," "-4.5," etc. to mean "off on 3" or "off on 4.5." I'll often make those indications myself in pencil after hearing how the lead player is playing it, or if we come to some sort of phrasing agreement as a section.

I've seen that as well, and using a dash is definitely the better option. I'm unsure whether this practice ever occurs in contemporary 'classical' music, or if the expression ten. is ever found in the jazz litterature, but I nevertheless find the latter much clearer, even if it isn't ideal.
Top

Thank you, Ere, for an excellent presentation of the situation. Your system of ten. and — is certainly clear, but I think a less cumbersome system that preserves the visually logical — to mean "long note" as opposed to the . for a "short note" with the combination of — and . to mean "moderately short note", is preferable. This would only require the introduction of a single new symbol for a mld accent. It probably should be something brand new to avoid further confusion, as interesting as Knut's idea is.

In any case, here is one example of the confusion surrounding the tenuto mark: Rachmaninoff's Prelude in C# minor. 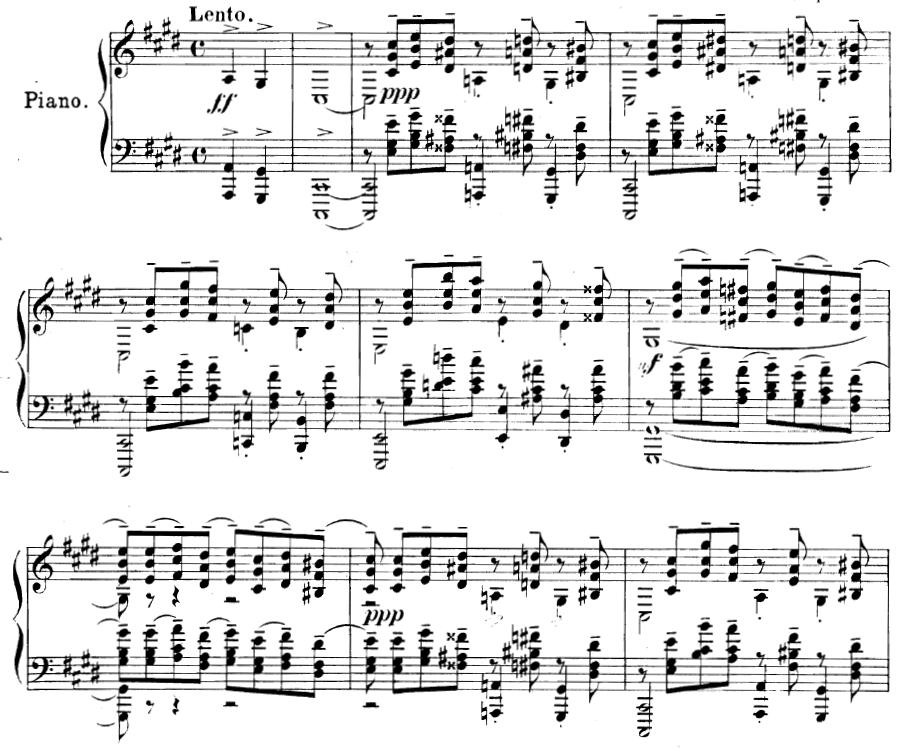 The first part has what must be a record number of tenuto marks. But what do they mean? Being generally in a series, they direct the player to hold the notes almost full value with the fingers but not to actually connect them. (The pedal will connect the chords.) And not to use arm motion to shape the chords unless there are slurs as well as the tenuto marks. Even where there are slur, the fingers are not to connect. This creates the impersonal bell-like effect intended by the composer. Connecting notes with the fingers is necessary to control the fine nuances used in espressivo playing, which is not intended here.

But in the second part, the slurred tenuto marks take on a new meaning. Now they appear to mean mild emphasis on each note of a melody that does deserve an espressivo performance in which the fingers connect and the arm shapes.

The tenuto mark may be understood to have a meaning relating to bow pressure for string players, and one relating to tonguing on woodwind (although that last is open to discussion). As for ten. written over a note, when it is over a highish note in operatic arioso, the singer (especially if a tenor!) might take it as an invitation to hold the note well beyond its written value.