Did it Really Matter? part 3

Did it Really Matter? part 3

As an example of what Beethoven had to contend with:

The unusual upward stems at the arrow show the two high notes as a semi-orchestral effect, as if a high instrumental group answers with greater intensity (shown by the large hairpin after the sf) the same notes played by a lower instrumental group in the previous measure.

Beethoven indents the high notes far to the right to give himself head room to use the upward stems, and places a lot of room after the two notes as if to show a large broadening. Everything points to playing these notes as a great climax that echoes the main motive of the movement.

Beethoven’s notation practically leads the player by the hand to the correct interpretation, no easy task, and very welcome at the end of this difficult piece.

So what does the copyist do? He transcribes what he sees literally. but misses the point and crowds the high notes into insignificance.

And the first edition? Everything is lost, stemming, spacing, even the hairpin loses its meaning. 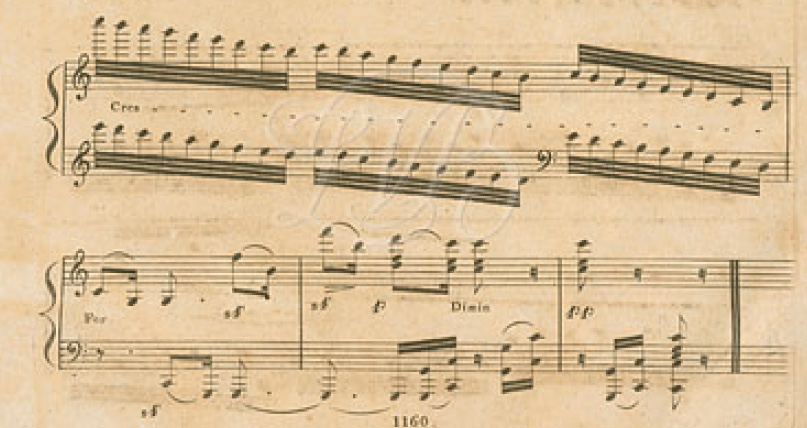 Ha! Now that I find very interesting. I'm now listening to it in my head as I hope it is intended, based on your analysis. Unfortunately it is quite beyond me to play it in effective context, but I do have a vivid ‘inner ear.’ Yes, I believe you are right. Thank you for this wonderful insight.
Finale 25.5 & F 26.2.2
Mac OS 10.13.6 & 10.14.6
http://www.composers-uk.com/davidward/news.htm
Top

You are very welcome, David. Beethoven's manuscript is the most expressive I've encountered. As a person, he must have been an open book, which fits with accounts of his personality by contemporaries.
Mac mini (OS 10.8.5) with dual monitors, Kurzweil Mark 5 with M-Audio Midisport 2 x 2,
Finale 2014d with GPO 4, JW Plug-ins, SmartScore X Pro, Adobe InDesign CS4,
Inkscape .48.5 and .91, FontForge 20150526
http://www.cantilenapress.com
Top

Here is the earlier draft of the final measures of op. 111 found in the same MS. The high F-B motive exhibits the same characteristics as in the final one in the OP: 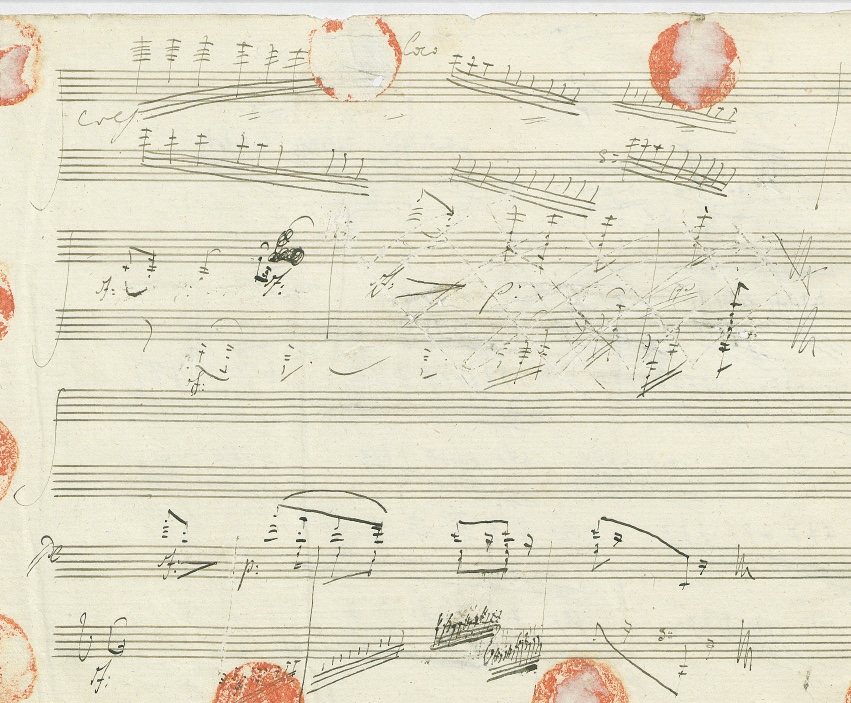 Note that below this in the same example above is an earlier draft in which Beethoven was going to repeat those two notes a third time softly with harmony, as the climax, so the earlier forte statement, still with the strong swell mark and upward stemming is not spread, but even contracted!

He was also going to accompany the final chords with a long ascending scale answering the previous descending scale.

What I find remarkable is that in his last major work for piano, the variations op. 120 based on a waltz by Diabelli that is almost a caricature of the Arietta theme of op. 111*, he recreated this alternate ending of op. 111, as if it were unfinished business. Here is Beethoven's MS of the last measures of the Diabelli variations:

* There is a theory that Diabelli cooked up his waltz theme (which he sent to 50 composers for a variation each) hoping that the resemblance to the Arietta theme would intrigue Beethoven enough to send one. Apparently, it did, because he responded with 33!
Mac mini (OS 10.8.5) with dual monitors, Kurzweil Mark 5 with M-Audio Midisport 2 x 2,
Finale 2014d with GPO 4, JW Plug-ins, SmartScore X Pro, Adobe InDesign CS4,
Inkscape .48.5 and .91, FontForge 20150526
http://www.cantilenapress.com
Top
Post Reply
4 posts • Page 1 of 1